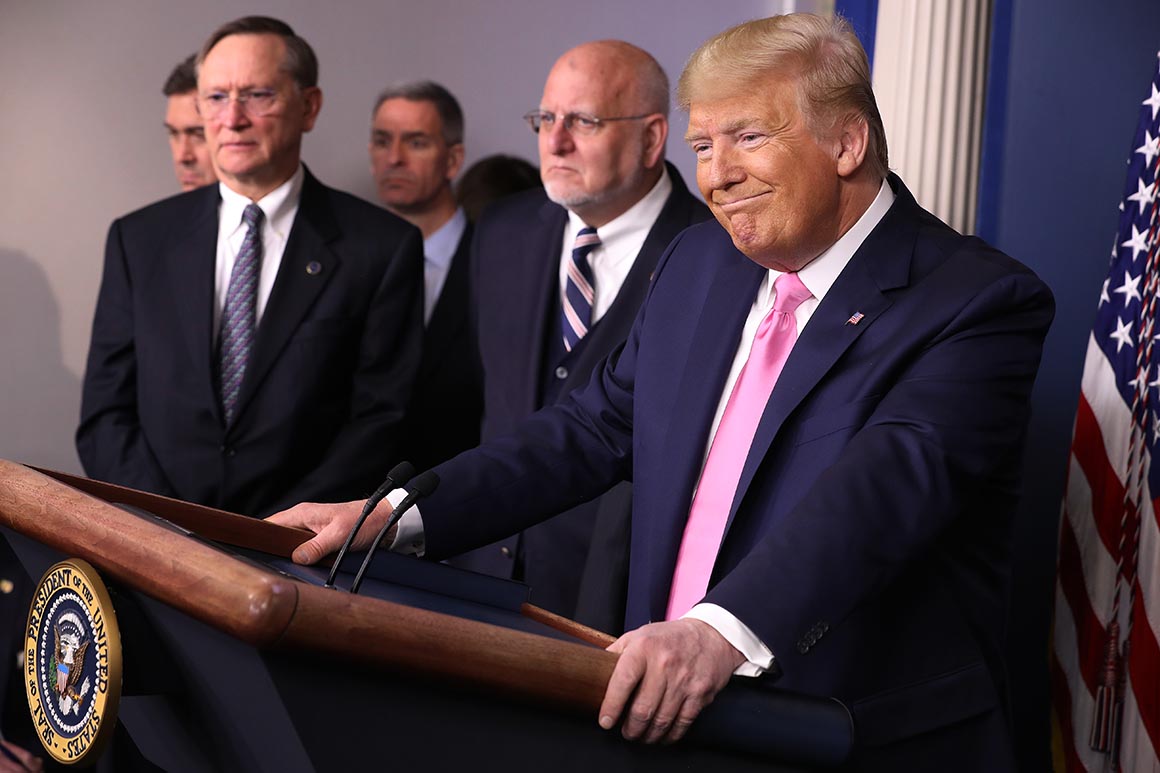 President Donald Trump tried to ease Americans’ fears about the potential spread of coronavirus on Wednesday night by putting himself at the center of it all.

He cracked wise about his germaphobia, recounted a run-in with a sick friend using a stand-up comedian’s patter, waved around colorful graphs showing America’s superiority on virus containment and listed facts he had just learned about the flu.

It was a performance that had kept White House staffers on edge all day, ever since the president unexpectedly tweeted his plans for a news conference after deplaning at sunrise from Air Force One. Just hours before his appearance was expected to begin, communications staffers were uncertain about how — or where — the news conference would take place, and whether the president or just the coronavirus task force would take questions.

But in the end, the news conference was a strategic effort by the White House to dampen fears about the coronavirus — by making Trump the face of it.

Trump discussed the low number of cases of coronavirus in the U.S., blamed the recent volatility in the stock market on both coronavirus fears and Americans’ reaction to the Democratic candidates for president. And while he said the administration was preparing for worst-case scenarios, “I don’t think we will ever be anywhere near that.”

“The threat to the American public remains low,” Trump said from the podium, less than a day after a top health official said it was only a matter of time before the outbreak would hit the U.S. and just minutes before the Centers for Disease Control and Prevention announced it had identified in California the first coronavirus case that had not been contracted from travel abroad.

The coronavirus has now spread from China to Japan, South Korea, Italy, Iran and elsewhere, causing global panic and sending the stock market tumbling. In Washington, aides are fearful that a slowing economy could hurt one of Trump’s key messages during his reelection bid.

So Trump decided to signal he was taking control.

His plans for the news conference in the infrequently used briefing room became apparent when Secret Service officials were spotted walking around the crowded press room area, indicating a presidential visit might be forthcoming. Moments later, an updated schedule from the White House announced that the president, vice president and members of the coronavirus task force would be holding the presser in the White House’s nearly mothballed James S. Brady Press BriefingRroom.

The news set off a flurry of activity as photographers and videographers scrambled to get their equipment and cameras in place.

It was a rare sight to have the president at the podium. He has appeared only once before — in 2019, the same day Nancy Pelosi was named speaker of the House, to steal the spotlight for a moment and congratulate her, and to advocate construction of the border wall. He also poked his head in the briefing room once to excitedly tease a “major announcement” from Korean officials in 2018 that ended up being his plans to meet with Kim Jong Un.

Before the news conference began, the president was receiving a briefing from members of the coronavirus task force who then crowded behind him on the small briefing room stage.

Then Trump began, relatively low-key to start, but picking up steam as he went along.

At one point, the president, whose staff always keeps hand sanitizer nearby, pantomimed washing his hands for the cameras, saying that people should treat the virus like they would a flu.

“He said, ‘I have the fever and the worst flu.’ He’s hugging and kissing me. I said, ‘Excuse me,’ and started washing my hands,” Trump said. “You have to do this. I think you want to treat this like the flu, right? You know, it’s going to be OK.”

He even joked about his own reputation as a germaphobe, saying that, in the case of the coronavirus, his penchant for frequently washing his hands seemed like a good plan.

At another point, Trump held up color printouts from Johns Hopkins University, listing what the school had determined were the best-prepared countries to handle a disease outbreak. The United States, of course, was No. 1.

The major news out of the news conference was Trump’s appointment of Vice President Mike Pence to run the administration’s response to coronavirus. Trump insisted Pence was not taking a czarlike position, nor was he displacing Secretary of Health and Human Services Alex Azar from leading the internal task force. Azar stood behind Trump during the news conference, smiling broadly after a day of testifying on Capitol Hill and fielding tough questions.

Azar’s job is not is not thought to be in jeopardy, three people close to the White House said, even though the decision to elevate Pence came as a surprise to many within the health department.

The White House may still opt to bring in someone from outside the administration to manage the response if the coronavirus outbreak worsens, said one person who recently supplied the administration with the names of a handful of candidates.

Pence’s appointment is seen as a compromise for now — giving officials time to assess their needs and see whether the crisis escalates, while allowing Azar to save face after less than a month as the effort’s leader.

Adam Cancryn contributed to this report.

Can’t afford to buy an apartment? This startup wants to sell you a share of one

What’s Awesome About Starring In An Alien Movie And What’s Not, Per Prometheus’ Guy Pearce