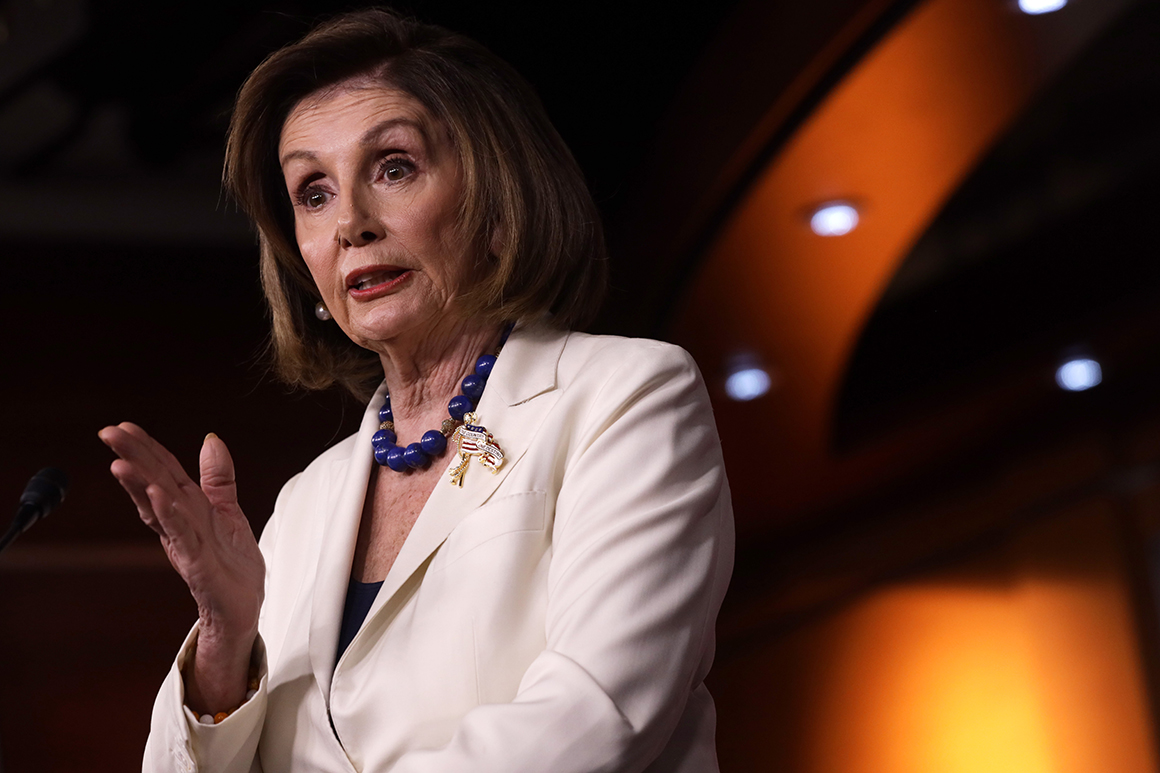 House Democrats are hoping to accomplish in the next two weeks what would usually take an entire Congress to achieve.

Speaker Nancy Pelosi and her deputies are scrambling to nail down a shutdown-averting spending bill, a caucus-unifying prescription drug bill and a continent-spanning trade deal — all before Christmas. And that doesn’t include the widely anticipated vote to impeach President Donald Trump, potentially even in the same week.

It’s an aggressive timeline that many Democrats are anxious — and in some cases, desperate — to achieve in the final critical stretch before the 2020 presidential elections begins to suck all attention away from Capitol Hill.

“It’s craziness,” freshman Rep. Susan Wild (D-Pa.) said of the lengthy to-do list this year. “I just don’t think there’s any excuse not to push through with all of these things

The sense of urgency is potent for first-term Democrats like Wild who will soon vote on articles of impeachment against Trump.

Much of the freshman class won their seats after campaigning on an ambitious domestic agenda of health care and economic issues and long resisted endorsing the progressive push to oust Trump. And now they’re facing a multi-million dollar GOP ad campaign accusing them of focusing solely on impeachment without much help from Democratic outside groups to push back.

Pelosi and top Democrats are attempting to push through several lingering marquee bills by 2020, including the speaker’s signature drug pricing bill, which continues to face resistance from the left after months of squabbling.

Then there’s Pelosi’s attempt to reach an agreement on USMCA — Trump’s renegotiated trade deal with Canada and Mexico — that some farm-state Democrats have been vocally demanding by year’s end.

A long-delayed Pentagon policy bill is also expected to reach the floor next week, a truncated timeline that some Democrats complain forced their leaders to concede on certain priorities, including a provision on the cleanup of certain chemical pollutants found in drinking water.

Pelosi has privately signaled to her leadership team and vulnerable Democrats that she doesn’t want impeachment to be the last vote the House takes before leaving for the two-week holiday recess, according to multiple lawmakers and aides.

“She wants to not have impeachment and then walk out of the door. She wants something before and after,” one Democratic lawmaker said, on plans to stack votes on other policy issues the same week as impeachment. “A big impeachment sandwich.”

But while centrists Democrats are nervously counting the days until they can get back to their districts — hopefully with more than just impeachment to discuss — they’re also wary of making it appear like they’re pushing through big policy bills just for the sake of campaign talking points.

“This idea that we need to artfully balance passing one bill on the same day that we pass another bill, I just think it’s more of a gimmick and the American people see beyond it,” Rep. Elissa Slotkin (D-Mich.) said.

The legislative logjam has swing-district freshman, in particular, worried that Democrats have overextended themselves in the final three weeks of the year. They fear that key parts of their campaign promises could go unfilled before they leave Washington for the holidays. Some first-term lawmakers have even privately suggested coming in during weekends to finish the workload, though the idea was quickly panned by more senior members of the caucus.

“The only thing I want to see a timeline on is HR 3 and an infrastructure bill. I don’t give a shit about timelines for anything else besides those things,” a defiant Rep. Max Rose (D-N.Y.) said this week, referring to the drug pricing bill, when asked about a possible impeachment vote.

“For communities like mine with strong agricultural and manufacturing base, USMCA is critical,” added Rep. Anthony Brindisi (D-N.Y.) on the trade deal.

But the Democrats’ ambitious agenda, as well as the impeachment push, is now running into Congress’s regular pileup of bills looking to get across the finish line by year’s end.

This year’s must-pass legislation includes a $1.4 trillion government funding bill and a hefty Pentagon policy bill, both of which have become extremely contentious amid intensifying partisan fights on Capitol Hill.

Negotiators on the bicameral National Defense Authorization Act are nearing the finish line, but are expected to cave on a key demand from many in Democratic caucus — the provision on chemical pollutants that’s been a top demand by members in more rural areas.

In a statement on Friday, Delgado called the final negotiations on the water contaminant "nothing short of disgraceful."

“People in my state are being poisoned and we are not going to give up,” Rep. Debbie Dingell (D-Mich.) said as she exited the House floor following the last votes of the week on Friday. “We are going to get something through and we’ve got a very diverse, large coalition and a lot of us are going to vote against the [defense bill] because of it.”

Congressional negotiators, meanwhile, say they’ve been slowly making headway to avert a government shutdown, which runs out Dec. 20. Senior appropriators have agreed on how much to spend in total, but are still struggling with perennial sticking points like Trump’s border wall.

In one sign of progress, Senate Appropriations chief Richard Shelby (R-Ala.) spoke by phone on Thursday night with Trump, who sounded “positive and encouraging about working with us,” according to one person familiar with the call.

Pelosi confidently dismissed the idea of a government shutdown during a CNN town hall Thursday night.

“I don’t think we’re headed for a shutdown,” Pelosi said on Thursday. “We would hope to be finished by the 21st and we’re on a good path. If we’re not, we would just go to a [continuing] resolution …until after Christmas.”

But while the impeachment process, and its impact on the congressional calendar, is an extraordinarily rare occurrence, veteran lawmakers say the end-of-the-year, nail biting effort to wrap everything else on the legislative list is nothing new.

“At the end of the year, it’s a jam,” said Rep. John Larson (D-Conn.), who has served in Congress for 20 years. “A lot becomes a logjam, even under the best of circumstances.”