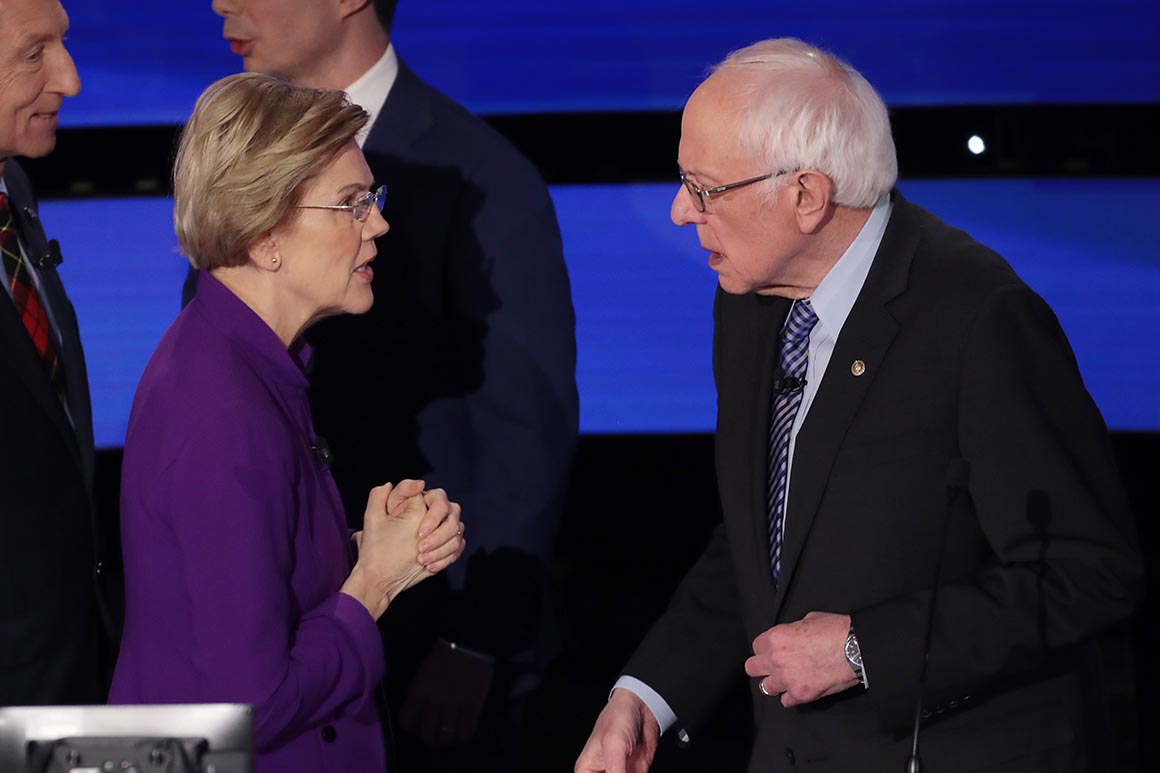 DES MOINES, Iowa—They chatted and laughed and clanked pint glasses for the first 43 minutes, paying just enough attention to the television monitors to know that nothing of consequence had yet occurred. And then, so suddenly that it could mean only one thing, the crowd inside Papa Keno’s Pizzeria fell hushed.

The past two days had been building to the must-see moment now airing live on CNN: Bernie Sanders was denying the allegation, reported by multiple outlets, that he had told Elizabeth Warren during a private meeting before the campaign began that he didn’t think a woman could win the presidency in 2020; and Warren, maintaining that he had, was disputing the perceived electability of Sanders and the other male candidates. “The only people on this stage who have won every single election that they’ve been in are the women,” she said.

As this tense exchange unfolded inside an auditorium on the campus of Drake University, the implications were manifest to the dozens of young people gathered in the college bar nearby. With 20 days remaining until Iowa’s first-in-the-nation nominating caucuses, two of the leading candidates were now engaged in a zero-sum, identity-based conflict that could reshape the Democratic race. And for many of the young voters watching Tuesday night, it wasn’t just any two candidates entering the Thunderdome—it was the two candidates they admired most, the two candidates they had struggled to choose between, the two candidates they believed would never attack each other.

“I sort of can’t believe this is happening,” says Nicole Margheim, shaking her head between sips of a local porter. “Maybe this is naïve, but I was hoping they would ignore this infighting and focus on policy. Now I’m really worried. We should be building a coalition to make sure one of them gets the nomination, and instead this is going to divide us on the left.”

Margheim, a Drake senior studying anthropology and English, backed Sanders against Hillary Clinton in 2016 but has remained noncommittal ahead of the Feb. 3 caucuses. The reason: Her admiration for Warren. Margheim says she has teetered back and forth between the two progressives, scrutinizing their positions, studying their candidacies and agonizing over which one to support. Margheim knew that eventually she would have to pick a side. She just never imagined it would happen under these circumstances—amid a confrontation not over policy disagreement but over accusations of gender sensitivity, “a he said, she said situation,” one that only grew more heated after the debate concluded, when Warren chose not to shake Sanders’ hand, setting social media ablaze and prompting pundits to run harder with a story that was otherwise losing its legs.

“I’ve always said I would be thrilled if either one of them was our nominee. I think a lot of us on the left felt that way,” she said of Sanders and Warren, noting that she doesn’t know whom to believe. “But now I’m not sure.”

Against the backdrop of a virtual four-way tie in Iowa, with Warren and Sanders running so closely alongside Joe Biden and Pete Buttigieg, the abrupt unraveling of the nonaggression pact between the two longtime friends and Senate colleagues is arguably the biggest development of the Democratic campaign. And while there are legitimate long-term questions about unity on the left heading into a general election, the more pressing question facing Warren and Sanders is how their dispute will be adjudicated among their most coveted demographic: young voters.

In 2016, when Sanders roiled the Democratic establishment by fighting Clinton to an effective tie in Iowa, he did so on the strength of overwhelming support among young people: Sanders won 84 percent of voters ages 17 to 29, entrance polls showed, compared with just 14 percent for Clinton. It was that lopsided advantage among younger Democrats, more than his appeals to working-class whites or any other demographic sect, that kept Sanders competitive with Clinton deep into the primary season.

Four years later, even as he sought to grow his loyal base of supporters, Sanders has invested heavily in maintaining that edge. This is particularly true in Iowa, a sprawling state with patchy population centers where organizing is famously challenging—and essential. With its two massive universities, several midsize schools and dozens of smaller private colleges scattered across the state, Iowa offers a sort of built-in activist class to any Democrat with the message and machinery to leverage it. Sanders has been the undisputed leader in this regard, out-organizing his Democratic rivals on Iowa campuses even since before the launch of his 2020 candidacy. But, by all accounts, Warren has been gaining on him, cultivating an organic grassroots loyalty while demonstrating a durable appeal to young voters that even her loyalists did not expect at the outset of the contest. (Curiously, the 37-year-old Buttigieg continues to poll shabbily among the youngest segments of the electorate.)

Long before the hostilities broke out this week between Sanders and Warren, it was becoming apparent to both camps—and to Iowa insiders—that the battle to become the progressive standard-bearer was boiling down to a battle for young voters. In September, when Warren surged to her first-ever lead in the Des Moines Register poll, it was because she had dethroned Sanders among voters under 35; when this month’s poll showed Sanders back on top of the field in Iowa, he had reclaimed a comfortable lead among that group. This has been a reliable pattern in almost every Iowa survey: Whichever one of the progressive candidates performs better among young voters, performs better statewide.

This reality was not lost on the 20- and 30-somethings who assembled for Tuesday night’s watch party, a joint venture of the Drake Democrats and the College and Young Democrats of Iowa. (The latter group brings high schoolers and young professionals under the activist umbrella.) In conversations with nearly a dozen attendees, the Sanders-Warren showdown was all anyone could talk about—not merely because it was the news of the night, but because it laid bare the reality that many of them, and many of their friends, were still struggling to choose between the two candidates.

“If I had to decide tonight, I don’t think I could do it,” said Katie Schickel, a recent University of Northern Iowa graduate who’s now a social worker in Des Moines. Like numerous other young women I spoke with Tuesday, Shickel said she wasn’t sure whether to believe Sanders or Warren—and frankly, wasn’t sure whether to care. “I don’t know what to make of this whole thing tonight, but I don’t think I view either of them differently because of it.”

“I liked that she used it as an opportunity to talk about her electability,” Olivia Habinck, a junior at the University of Northern Iowa, said of Warren’s performance Tuesday. Still, Habinck downplayed the entire drama—“we have so many bigger fish to fry”—and said that she wouldn’t downgrade Sanders for his role in the feud. These young women mostly agree that sexism has played a role in the Democratic primary, but there was consensus as well that Sanders is no sexist.

So, whom will she caucus for?

“I really don’t know,” Habinck said. “It’s 20 days away. That doesn’t sound like a lot of time. But as we’ve just seen, anything can happen.”

Leaning into the bar at the debate’s conclusion, Margheim sipped the last of her beer and looked around. She wondered how many of her compatriots were caught in the same dilemma. “I mean, I live with four other girls, and we’re all stuck between Warren and Sanders,” she said. “It’s the policy details and passion of Warren, versus the charisma and grassroots energy of Bernie. And my gut still hasn’t led me one way or the other.”

The indecision didn’t scare her until the events of this week. In just the past few days, Margheim said, she’s begun to see attacks, online and elsewhere, mounted by friends and classmates loyal to one of the two candidates: Warren fans questioning Sanders’ age and health and electability, Sanders fans challenging Warren’s authenticity and her commitment to progressive ideals. Suddenly, Margheim fears, caucusing might feel less like making a choice and more like picking a fight.

“It’s really unnerving,” she said. “I hope it doesn’t just hurt them both.”