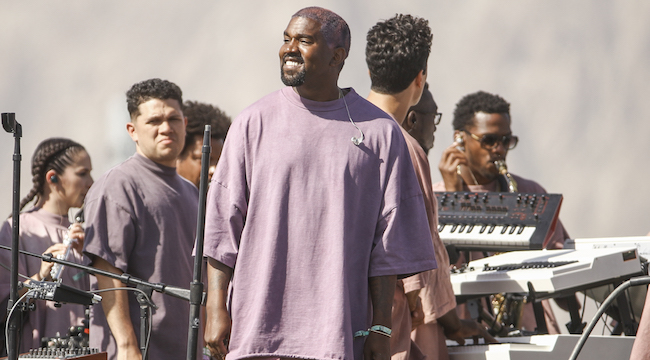 Watch out, churches of the world — if Kanye West has his way, “Sunday Service” is about to be a trademarked brand.

According to Page Six and Complex, the rapper has filed a trademark for “Sunday Service.” The paperwork, reportedly sent through to the US Trademark And Patent Office July 19, is seeking to register “Sunday Service” for “bottoms, dresses, footwear, headwear, jackets, loungewear, scarves, shirts, socks, and tops.”

The “Sunday Service” merch first appeared during West’s 2019 Easter Sunday Coachella performance. The rapper sold church-themed socks for $50 and hoodies and t-shirts for $150+ at the festival. According to Page Six, the trademark application was filed by Mascotte Holdings, which also handled trademark applications for Yandhi, Yeezus, Yeezy, Calabasas Clothing and Kanye West.

The US Trademark And Patent Office should reach a decision sometime soon West is joined by several other rappers who are attempting to file trademarks with signature catchphrases. Cardi B reportedly filed a trademark for “Okurrr” this spring (the trademark was later denied), and Megan Thee Stallion recently filed to own the merch rights for “Hot Girl Summer.”

Page Six also reported that Ye filed a trademark for “Half Beast” earlier this year, for some sort of televised or online entertainment venture that includes toys.