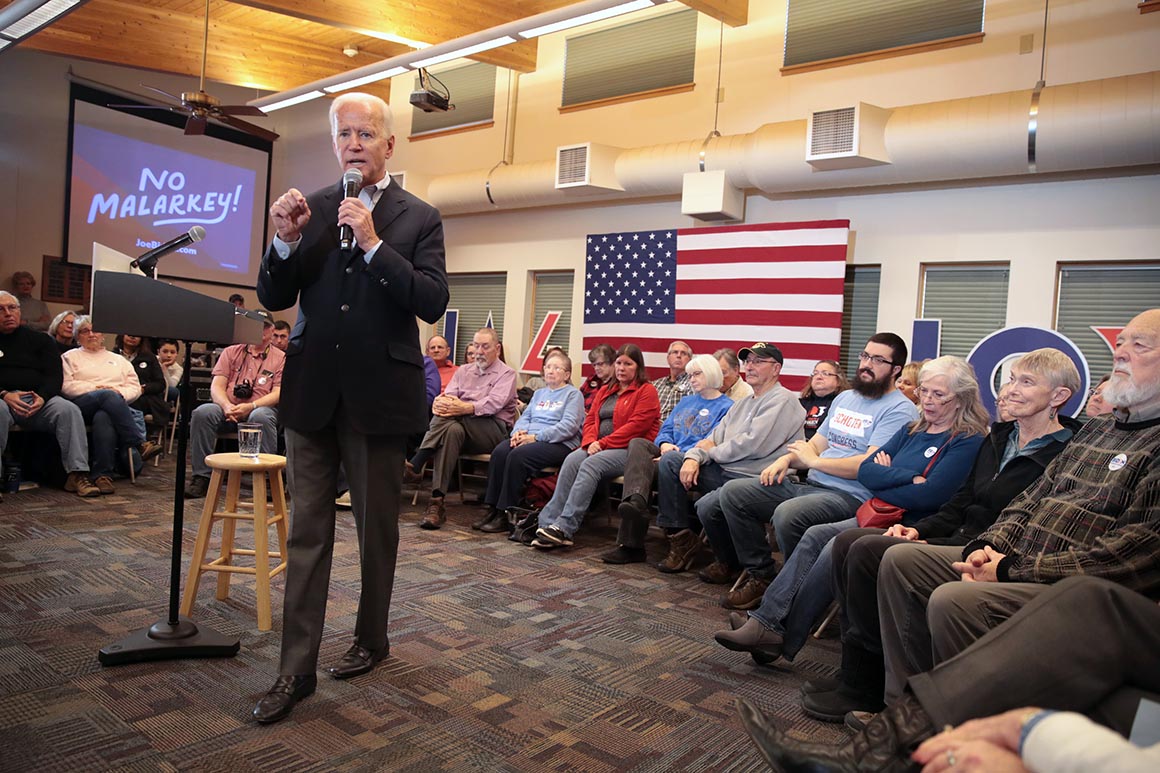 ELKADER, Iowa — Joe Biden has two methods of responding to questions about his son’s controversial business dealings in Ukraine: denial and anger.

But so far, Biden doesn’t have a clear and cogent message — and Iowa voters are starting to take notice, especially after his fiery encounter Thursday with a retired farmer who advanced the unfounded claim that the former vice president played a role in landing his son a job at a Ukrainian gas company.

Biden was forced Friday to address the confrontation, in which he had called the voter a “damn liar,” and even challenged him to a physical fitness contest after the 83-year-old man said the 77-year-old Biden was “too damn old” to be president.

“I probably shouldn’t have challenged him to pushups,” Biden told reporters when asked about the run-in.

But he denied that Iowans want to talk to him about his son Hunter Biden’s overseas business deals.

“We’ve had over 2,000 people show up on this bus trip and no one has done it except that fella,” Biden told reporters briefly after an event Friday morning in Cedar Rapids. “It’s going to be part of what is the opposition’s case, ‘You’ve done a bad thing to so and so.’ It’s just not true. Trump’s already spending 12 million bucks to try to make the same message. And there’s nothing to the message.”

The problem for some, however, isn’t the president’s attacks — which many Democrats dismiss out of hand. It’s Biden’s response.

To voters like Carol Wickey, a 78-year-old Cedar Rapids Democrat who is undecided in the race and attended a Biden event in her hometown, the candidate isn’t explaining enough.

“He needs to be prepared to answer questions about it. And I don’t think he is. I don’t think he’s come up with an answer,” she said. “Loving his kid to death and not doing anything wrong is not an answer. And I, as someone who thinks he’s a really decent human being, when I first started hearing about the Hunter connection, it bothered me. I wanted an answer because it doesn’t look good. It’s a bad perception.”

Democratic voter Ann Gibny said she didn’t like Biden’s exchange and said he should explain more about Hunter.

“He shouldn’t act like Trump. We don’t need that,” she said. “I don’t like what Trump is doing at all [concerning his unproven claims about Hunter Biden and Ukraine], but some people have real questions about this and he needs to respect that.”

So far, the campaign and candidate have met questions about Hunter’s lucrative business arrangements with flat-out denials — sometimes to questions that are accurate — or efforts to shut down questions about it.

But the limits of that approach became clear in a Wednesday interview with Telemundo host and reporter José Díaz-Balart during a discussion about Ukraine.

“Your son did make a lot of money there,” Díaz-Balart said.

Díaz-Balart then asked if the arrangement was “wrong.”

“No,” Biden said. “There is nothing to [the allegation] that he did anything that was illegal. Nothing.”

Díaz-Balart then noted that he wasn’t talking about legality but propriety.

“Here’s what I’m not gonna do,” Biden said. “I’m not gonna — and I know you’re not intending to do this — play the game to take the eye off the culprit.”

Biden’s campaign likewise has steadfastly refused to discuss the issue in depth publicly. Privately, some have expressed frustration with the fact that Hunter Biden put his father in this situation with his role at the Ukrainian gas company Burisma, which Joe Biden maintains he had nothing to do with.

“One of his sons died. This is his boy. It’s very personal to him and he’s just not going to throw his kid under the bus,” an adviser to Biden said.

Most voters at Biden’s events who spoke to reporters about Hunter Biden said they were voting for the former vice president and they liked the raw way he handled the attack about his son.

But Hannen thinks Biden needs to say more because his son’s job in the eastern European country represented “poor political judgment. He should say ‘we made a mistake’ …. I think in a political family, it’s a collaboration. Now, there have been bad political brothers or brothers-in-law, but I think he should say ‘as a family, we made a mistake and in retrospect, we shouldn’t have done that’ and move on.”

Her sister, Caroline Roseberry, thought that was unfair to expect that from Biden.

“His son is a grown man. You can’t control your kids,” she said, a common refrain from voters like Ronald Daly, who mused with a friend that the retired farmer who attacked Biden was a “Republican plant.” (The man said he was a Democrat.)

“Biden was great. The voter was an asshole,” Daly, 74, said. “People like the fight. They want someone to take it to Trump.”

One sign of the ongoing awkwardness surrounding the issue surfaced in the aftermath of Biden’s Thursday confrontation. His emotional response, captured on video, made the nightly network news, cable news broadcasts and dominated social media. On political Twitter, where Biden normally has scant support, the former vice president basked in the praise of liberals who saw a glimpse of a candidate they could envision taking the fight to Trump on stage at a debate.

But despite the outpouring of support, Biden’s campaign didn’t fundraise off the encounter — a departure from practice in a primary where every candidate has sought to monetize anything approaching a viral moment. Nor did it attempt to market Biden’s memorable retort to the voter — “get your words straight, Jack!” — on T-shirts or coffee mugs, a common tactic of Trump and Elizabeth Warren’s campaigns.

Political pros were scratching their heads at the missed opportunity.

“Voters are desperate for honest, authentic candidates and Biden had a highly visible honest, authentic moment,” said Eric Wilson, a Republican digital strategist, who was surprised the campaign didn’t do more.

“Not talking about the moment doesn’t magically make it go away,” Wilson said. “When the campaign gives you lemons, you have to make lemonade.”

Joe Trippi, a veteran Democratic consultant, said Biden is still in a good spot, saying his show of strength “came at just the right time” because primary voters are starting to tune in more as Biden appears to gain momentum.

“Joe Biden has this feisty moment, and maybe it’s over the top, but people are saying, ‘Yeah. He’s got some fight in him.’ The naysayers can say what they want but it’s going to be helpful because it hit at the right moment,” Trippi said.

“But this is not going to go away and Biden’s campaign probably understands that,” he said. “The general election may be a better time to take this on, but it’s going to have to be done. It’s not going away.”