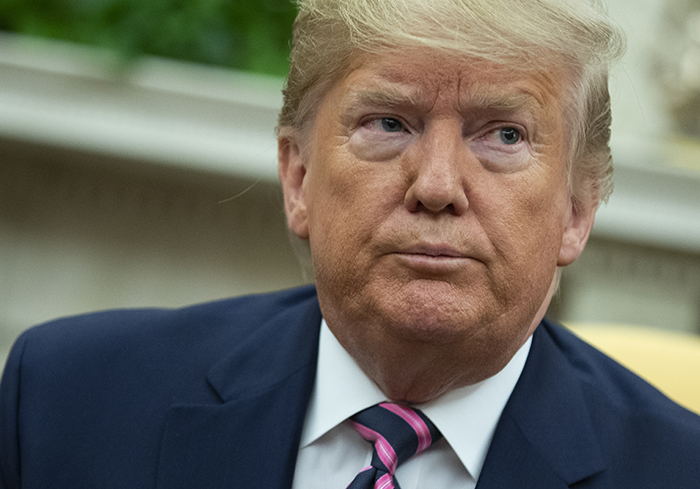 LOOK AT PRESIDENT DONALD TRUMP’S last two successes: USMCA and government funding. What’s the common thread? He had next to nothing to do with them. USMCA — the president’s top legislative priority — will sail through Congress after yeoman’s work by ROBERT LIGHTHIZER, the USTA, and the White House legislative affairs team, which kept close tabs on members of both parties in the House as it worked through changes on the bill.

GOVERNMENT FUNDING was captained by STEVEN MNUCHIN, the Treasury secretary, who has found his niche working with Speaker NANCY PELOSI and the appropriators crafting spending agreements — an odd job for a Treasury secretary.

IT ALL ADDS UP to a dizzying environment in Washington. Trump’s team is notching victories. But the president’s behavior and ever changing impeachment strategy help solidify the impression of an erratic commander in chief.

CASE IN POINT: NYT’s Maggie Haberman is reporting this morning that White House Counsel Pat Cipollone may not be Trump’s lead impeachment representative after all. “Trump has still been quizzing people about who should do it, and has wondered about Cipollone’s lack of experience on TV, said a person familiar with the talks,” she tweeted. We reported in Playbook last week that members of the House — Jim Jordan or John Ratcliffe — could be among those in the mix as additions to his legal team.

SIREN — JOSH GERSTEIN: “Supreme Court to hear three cases seeking access to Trump’s financial and tax records”: “The Supreme Court has agreed to hear three separate court cases involving demands for access to President Donald Trump’s financial and tax records, putting the justices in the position of making high-profile decisions on unlocking some of Trump’s closely-held secrets in the middle of the 2020 presidential campaign.

“The high court announced Friday afternoon that it will hear arguments in March on two cases involving House committees’ demands for Trump-related records in the hands of his banks and accountants, as well as a third case in which a Manhattan prosecutor is using a grand jury subpoena to demand similar records.

“During the 2016 campaign, Trump promised to release his tax returns, but he later reversed course, citing ongoing audits. He has since vigorously fought efforts to obtain his returns. The justices are likely to rule on the cases by June.” POLITICO

ABOUT THAT CHINA TRADE DEAL … “China’s Hard-Liners Win a Round in Trump’s Trade Deal,” by NYT’s Keith Bradsher in Beijing: “The White House called the deal a win. It said China had agreed to buy large quantities of American agricultural goods, giving farmers hit by the trade war some needed relief. It also means the United States economy will not suffer from new tariffs threatened for Sunday on Chinese-made goods that Americans love to buy, like toys and smartphones.

“But the deal may be seen by Xi Jinping, China’s top leader, and his hard-line supporters as vindication of the intransigent stance they have taken since the spring, when a previous pact struck by Chinese moderates fell apart. Since then, China has asked that even a partial deal include tariff rollbacks. American officials resisted, debated, then relented.” NYT

“The announcement comes as North Korea continues to pressure the Trump administration for major concessions as it approaches an end-of-year deadline set by leader Kim Jong Un to salvage faltering nuclear negotiations. North Korea’s Academy of Defense Science did not specify what was tested on Friday.

“Just days earlier, the North said it conducted a ‘very important test’ at the site on the country’s northwestern coast, prompting speculation that it involved a new engine for either an ICBM or a space launch vehicle.” AP

“The amendment, carried forward into current law, has resurfaced with a vengeance in El Paso, Texas. U.S District Court Judge David Briones has been quoting back its words in a series of rulings against Trump’s decision to take $3.6 billion from military construction projects to expedite his wall.

“As first adopted, the Republican language specifically prohibited Obama from taking any step to ‘eliminate or reduce funding for any program, project, or activity as proposed in the President’s budget request’ until it’s cleared with Congress.

“The triggering event was a relatively narrow dispute in 2013 over funding for space exploration. But when they were enacted in Jan. 2014, the restrictions applied government-wide. And a year later, under full Republican control, Congress added the word ‘increase’ alongside ‘eliminate or reduce’ funding.

“What goes around, in other words, comes around. But what’s most remarkable is how much the legislative phrasing — aimed squarely at Obama — applies directly to the current fight involving Trump.” POLITICO

— “Swarovski crystals, $900 cabernet and a Buttigieg fundraiser,” by AP’s Brian Slodysko: “The Hall Rutherford wine caves in the hills of California’s Napa Valley boast a chandelier with 1,500 Swarovski crystals, an onyx banquet table to reflect its luminescence and bottles of cabernet sauvignon that sell for as much as $900.

“It is also where Pete Buttigieg, the Democratic presidential candidate, will dine privately with donors following a Sunday fundraiser hosted by Craig and Kathryn Hall, the winery’s billionaire owners, according to an invitation obtained by The Associated Press.

“The fundraiser is both a measure of the unexpected success of the mayor of South Bend, Indiana, who has vaulted into the top tier of candidates and of the perilous optics of consorting with well-heeled donors that offers such a stark contrast with his more liberal rivals.” AP … Caitlin Oprysko on Buttigieg knocking donor purity tests

— “‘Mayors for Mike’: How Bloomberg’s Money Built a 2020 Political Network,” by NYT’s Alex Burns, Nicholas Kulish and Shane Goldmacher in Stockton, Calif.: “As Mr. Bloomberg traverses the country as a presidential candidate, he is drawing on a vast network of city leaders whom he has funded as a philanthropist or advised as an elder statesman of municipal politics. Bloomberg Philanthropies, which has assets totaling $9 billion, has supported 196 different cities with grants, technical assistance and education programs worth a combined $350 million.

“Now, leaders in some of those cities are forming the spine of Mr. Bloomberg’s campaign: He has been endorsed so far by eight mayors — from larger cities like San Jose, Calif., and Louisville, Ky., and smaller ones like Gary, Ind., representing a total of more than 2.6 million Americans.

“For all of those endorsers, Mr. Bloomberg has been an important benefactor. All have attended his prestigious boot camp at Harvard that gives the mayors access to ongoing strategic advice from Bloomberg-funded experts. More than half have received funding in the form of grants and other support packages from Mr. Bloomberg worth a total of nearly $10 million, according to a review of tax documents and interviews with all eight mayors.” NYT

— “Mike Bloomberg will push Wall Street executives, other megadonors to back fundraising effort for DNC in 2020,” by CNBC’s Brian Schwartz 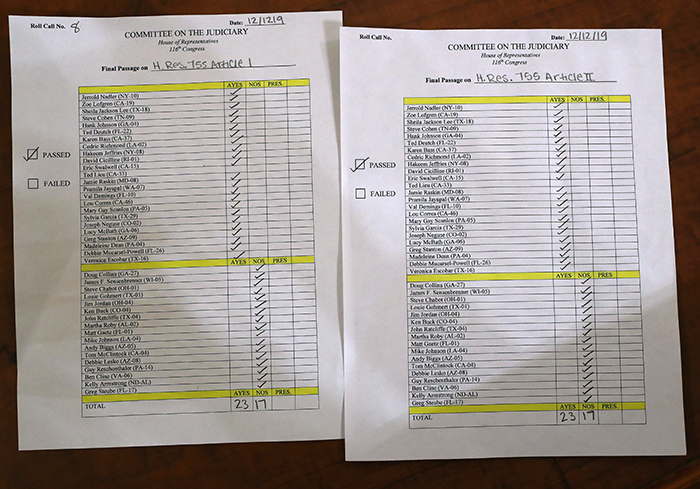 FOR YOUR RADAR — “AP Exclusive: China tightens up on info after Xinjiang leaks”: “The Xinjiang regional government in China’s far west is deleting data, destroying documents, tightening controls on information and has held high-level meetings in response to leaks of classified papers on its mass detention camps for Uighurs and other predominantly Muslim minorities, according to four people in contact with government employees there.

“Top officials deliberated how to respond to the leaks in meetings at the Chinese Communist Party’s regional headquarters in Urumqi, Xinjiang’s capital, some of the people said. They spoke on condition of anonymity because of fears of retribution against themselves, family members and the government workers.” AP

“In a letter Friday to PG&E, the Democratic governor said the company’s plan ‘fails to address most of the issues we previously raised,’ including a transformed corporate board and sufficient financial stability to make major safety investments. PG&E has until Tuesday to respond and make changes to the plan, under a deal it struck last week to settle claims with wildfire victims for $13.5 billion.” WSJ

MEDIAWATCH — NYT’S @anniekarni: “Trey Gowdy — who was fired as a Fox News contributor when he was briefly set to join Trump’s legal team — has been rehired by Fox, I am told by a source.”

CLICKER — “The nation’s cartoonists on the week in politics,” edited by Matt Wuerker — 17 keepers

— “Silicon Valley Is Listening to Your Most Intimate Moments,” by Austin Carr, Matt Day,
Sarah Frier, and Mark Gurman in Bloomberg: “How the world’s biggest companies got millions of people to let temps analyze some very sensitive recordings.” Bloomberg

— “Hong Kong’s Protest Movement and the Fight for the City’s Soul,” by The New Yorker’s Jiayang Fan: “After six months of unrest, anti-Beijing protesters are increasingly unwilling to compromise.” New Yorker

— “The Long-Forgotten Vigilante Murders of the San Luis Valley,” by Robert Sanchez in the December issue of 5280: “How history forgot Felipe and Vivián Espinosa, two of the American West’s most brutal killers—and the complicated story behind their murderous rampage.” 5280 (h/t Longform.org)

— “‘I’ve seen death in this city, but nothing as sad as this’: how a ferry disaster exposed the corruption devastating Iraq,” by Ghaith Abdul-Ahad in Umm Rabaen island in Mosul, Iraq, in The Guardian: “As protests against a rotten system continue, the families of 128 drowned civilians await justice.” Guardian (h/t Longform.org)

— “How William Gibson Keeps His Science Fiction Real,” by The New Yorker’s Joshua Rothman: “Midway through his career, the inventor of ‘cyberspace’ turned his attention to a strange new world: the present.” New Yorker

— “The Best of Nature Writing 2019” — Cal Flyn interviewing Charles Foster in Five Books: “‘Most of us have an intuition – which becomes a conviction when we look into the eyes of our dogs – that humans, although very special, are intimately connected with non-humans. This is a blindingly obvious thing to say, a trite evolutionary truth. But much of our personal, and all of our environmental, malaise is caused by denying it.’” Five Books (h/t TheBrowser.com)

— “How Do you Stop Taking Recalled Medication If You Don’t Know It’s Been Recalled?” by Margaret Newkirk and Susan Berfield in Bloomberg Businessweek: “FDA recalls are always voluntary and sometimes haphazard—and the agency doesn’t want more authority to protect consumers.” Bloomberg Businessweek

— “Refinitiv deployed filter to block Reuters reports as Hong Kong protests raged,” by Reuters’ Steve Stecklow: “Under pressure from the Chinese government, the financial information provider that distributes Reuters news to investors has blocked over 200 stories on the mainland that could paint Beijing in a negative light. The censorship began earlier this year after Refinitiv feared its China operation would be suspended.” Reuters

— “How Spices Have Made, and Unmade, Empires,” by Ligaya Mishan in the NYT’s T Magazine: “During the Roman Empire, Nero burned a year’s supply of cinnamon at the funeral of his second wife, Poppaea, perhaps regretting that, as recorded by early historians, he himself had murdered her. (On a more earthly note, spices were also employed as tools of seduction — Caesar was reportedly beguiled by the cinnamon wafting from Cleopatra’s hair — and served practical purposes, mitigating the salt in preserved foods and masking bad breath and odors from poor sanitation.)” T Magazine

Send tips to Eli Okun and Garrett Ross at politicoplaybook@politico.com.