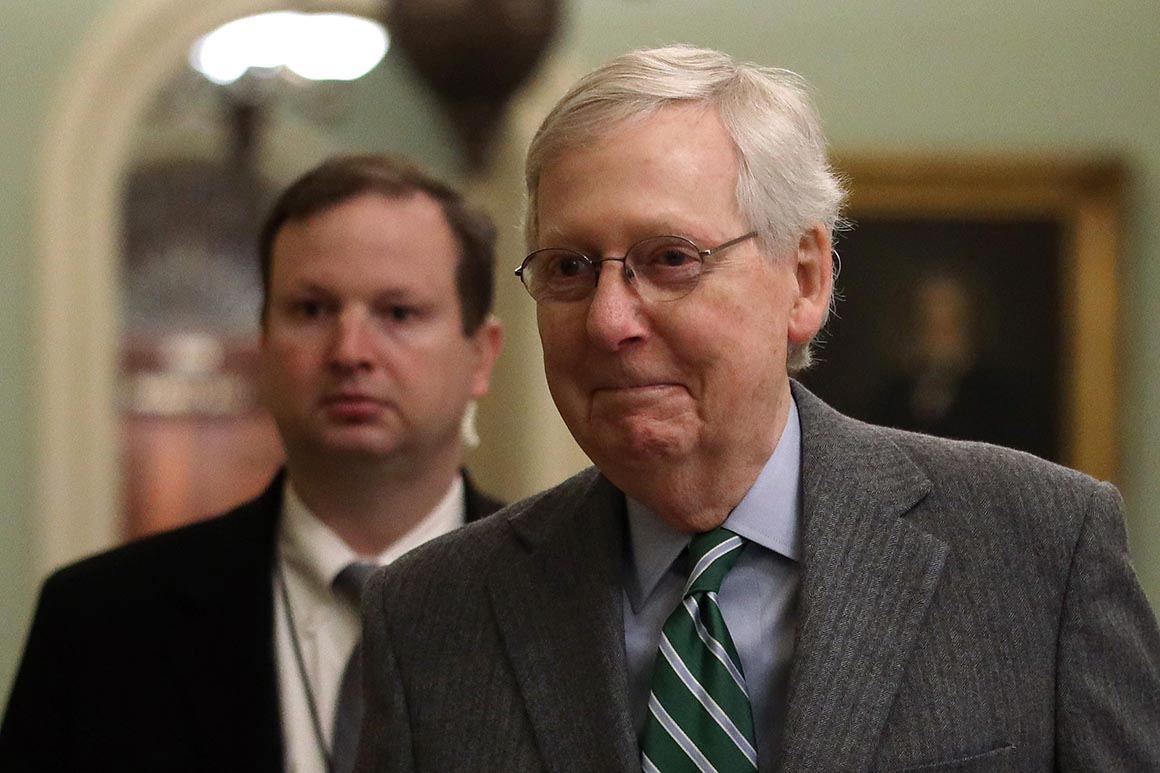 The impeachment trial of President Donald Trump is now underway.

"The Senate will receive the managers of the House of Representatives to exhibit the articles of impeachment against Donald John Trump, president of the United States,” said Senate Majority Leader Mitch McConnell Thursday at the start to the proceeding to formally begin the trial.

The seven Democratic House managers who will argue the case for removing President Donald Trump from office then formally presented the articles of impeachment to the Senate.

The House impeached Trump on Dec. 18 on charges of abuse of power and obstruction of Congress for pressuring Ukraine to investigate his political rivals and for blocking the House from further investigating the scandal. Trump’s Senate trial is the third presidential impeachment trial in American history.

Senators mostly sat stone-faced as Schiff read the charges, though several occasionally scribbled on their fresh notebooks in front of them. Rep. Al Green (D-Texas), who led the charge to impeach Trump, sat aside Senate staff, soaking the moment in. Senators did not speak to each other or look at their phones, an immediate deviation from usual Senate conduct.

Chief Justice John Roberts will arrive in the Senate at 2 p.m. and will be escorted by Sens. Roy Blunt (R-Mo.), Dianne Feinstein (D-Calif.), Lindsey Graham (R-S.C.) and Patrick Leahy (D-Vt.). Roberts will be sworn in by Sen. Chuck Grassley (R-Iowa), the Senate’s president pro tempore. He will then swear in all 100 senators, where they will take an oath to do “impartial justice.”

Despite Thursday’s ceremonial proceedings, the impeachment trial will not begin in earnest until Tuesday, with a contentious vote on the rules package to govern the trial. Twenty years ago, Leahy successfully pitched Senate leadership on an all-senators meeting to avoid a partisan set of Senate rules. He asked Schumer and McConnell to consider doing the same this time, to no avail so far.

“I’ve suggested it. I’ll leave it up to them,” he said on Thursday.

Senate Democrats have called for agreeing to hear witnesses at the outset of the trial but have been rebuffed by McConnell. The GOP majority’s trial blueprint kicks the question of whether to hear witnesses until after House managers and the president’s defense present their case.

The mood on the Hill was somber, as members prepared for the trial.

"The feeling on the Senate floor, the mood on the floor is much different," said Senate Democratic Whip Dick Durbin (D-Ill. ). "I sensed it last night when the articles arrived and even again today. Certainly more security but also a sense of seriousness."

Sen. John Kennedy (R-La.) said Thursday morning he was feeling "a little fatigue" and "stayed up late last night trying to get ready … trying to go through the transcript of the Clinton impeachment proceedings."

Despite the seriousness of the occasion, Senate and House leadership were not above partisan sparring Thursday morning. Prior to the arrival of the House managers, McConnell mocked Pelosi for handing out commemorative pens to House managers after signing the articles of impeachment.

Handing out commemorative pens is a common occurrence after official signings.

“The speaker distributed souvenir pens to her own colleagues, emblazoned with her own golden signature, that literally came in on silver platters,” the Kentucky Republican said on the Senate floor. “Nothing says seriousness and sobriety like handing out souvenirs as though this were a happy bill signing instead of the gravest process in our Constitution.”

McConnell also reiterated his criticism that the House rushed through the impeachment process and said it’s now time for the Senate to “honor our founding purpose.”

Senate Minority Leader Chuck Schumer (D-N.Y.) shot back at McConnell for criticizing House Democrats and argued the GOP leader was the one trying to ram the trial through the Senate.

“He complains about processes, pens and signing ceremonies, but still does not address the charges against the president and why we shouldn’t have witnesses and documents,” Schumer said. “We’re waiting. Rise to the occasion.”

“I hope that the senators do not become part of the president’s henchmen,” Pelosi warned Thursday. “Any further evidence should not be avoided and now the ball is in the court of the Senate.”

Heather Caygle and Burgess Everett contributed to this report.