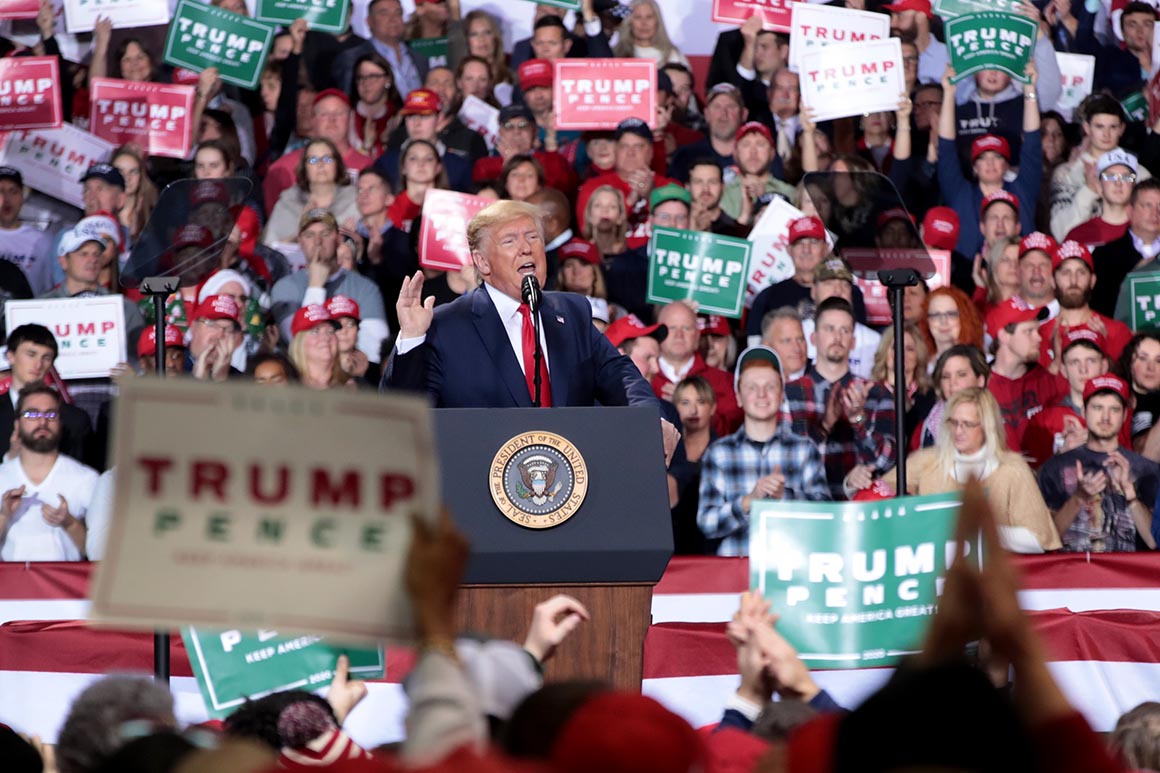 As President Donald Trump raises money for his reelection campaign, he’s competing for cash with a growing mass of pro-Trump PACs, dark money groups and off-brand Facebook advertisers neither affiliated with nor endorsed by Trump’s campaign, which have pulled in over $46 million so far.

The groups mimic Trump’s brand in the way they look and feel. They borrow the president’s Twitter avatar on Facebook pages, use clips of Trump’s voice in robocalls asking for “an emergency contribution to the campaign” and, in some cases, have been affiliated with former Trump aides, such as onetime deputy campaign manager David Bossie. But most are spending little money to help the president win in 2020, POLITICO found.

The unofficial pro-Trump boosters number in the hundreds and are alarming the actual operatives charged with reelecting the president: They suck up money that Trump aides think should be going to the campaign or the Republican National Committee, and they muddy the Trump campaign’s message and make it harder to accumulate new donors, Trump allies say.

“There’s nothing we can do to stop them,” said Kelly Sadler, a spokeswoman for America First, the one super PAC authorized by Trump. “This is a problem for the campaign, as well as us, as well as for the RNC.”

Overall, $46.7 million flowed into close to 20 Trump booster organizations, structured as PACs or political nonprofits and with names like Latinos for the President and MAGA Coalition, between January 2017 and the end of June 2019, according to the most recent data available. The overwhelming majority of the money comes from donors giving $200 or less.

Additionally, 265 Facebook pages spent more than $4 million on Trump-related advertising in the past year and a half, but they are not registered political committees, according to advertising disclosures from the social media company. There are no public records of how much money these groups raised off their advertising, but the millions spent give some indication of the size of the lucrative online market selling pro-Trump merchandise — which, of course, the Trump campaign also sells.

The Trump campaign has made public statements and sent letters to the Federal Election Commission calling for all outside groups except America First to cease operations.

And in a statement to POLITICO, the Trump campaign urged federal authorities to probe potentially illegal behavior.

“President Trump’s campaign condemns any organization that deceptively uses the President’s name, likeness, trademarks, or branding and confuses voters,” the Trump campaign said. “There is no excuse for any group, including ones run by people who claim to be part of our ‘coalition,’ to suggest they directly support President Trump’s reelection or any other candidates. We encourage the appropriate authorities to investigate all alleged scam groups for potential illegal activities.”

But the statements have made little impact. While they have helped drive wealthy donors to the White House’s preferred groups, Sadler said, grassroots Republican donors are still being picked off by the pirate pro-Trump groups.

Great America PAC, which bills itself as Trump’s “strongest and most active independent ally,” raised $11.1 million from 2017 to mid-2019, and it has reported spending $4.5 million on ads supporting Trump and his allies since the president’s election, according to the FEC.

But Great America PAC has no actual affiliation with the Trump campaign, as a disclaimer at the bottom of its website notes. And the group pays large sums to its main employees and their businesses, FEC and IRS documents show.

Great America PAC’s affiliated nonprofit, called Great America Alliance, paid $2.7 million to consultants in 2017 and 2018, according to tax forms filed with the IRS, accounting for nearly half the group’s total operating expenses. In 2017 alone, $955,382 went to Frontline Strategies, a public affairs and government relations firm registered in California by Great America PAC co-chairman Eric Beach, for “management services,” according to the tax filings. It is unclear whether Great America PAC’s leader, Ed Rollins, received payments from the nonprofit, but the PAC’s FEC reports show it paid Rollins $330,000 since the start of 2017.

And a review raises questions about the $4.5 million in TV ad spending Great America PAC claimed in filings with the FEC and in public statements over the past 2½ years.

Advertising Analytics, a TV ad-tracking firm, said the data it has collected shows only $359,901 in TV spending by Great America PAC between January 2017 and December 2019.

In an interview, Beach said the discrepancy was because Great America PAC buys almost all of its ads "through providers such as DirectTV, DISH, Comcast, OANN" and not through cable and broadcast advertising.

Advertising Analytics said its data collected for POLITICO would include Comcast cable ad purchases and would most likely incorporate ads for satellite and DISH networks, but some information could be missing because of how the advertising is purchased. 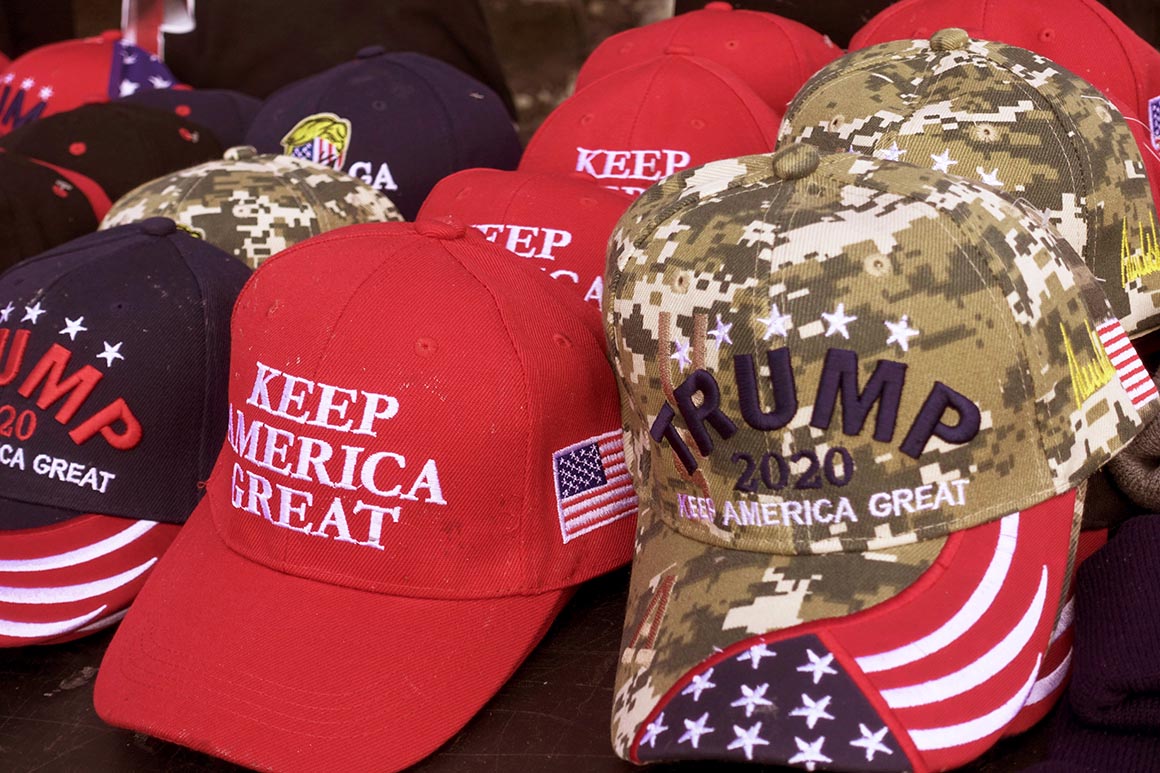 Beach said the payments for "management services" to his firm, Frontline Strategies, were for a range of services, including money that was not kept and was routed through his firm to place ad buys.

Another group urging small-dollar donors to help Trump is Tea Party PAC, which has raised $607,790 so far this year.

“We have only TWO OPTIONS: build a MASSIVE war chest now or give up and let the Democrats impeach President Trump ahead of the election,” the group’s website says.

More than half of the money raised, $357,900, went to an obscure business, Retromedia LLC, with only one client among federal campaigns and political committees, according to the FEC: Tea Party PAC.

Retromedia is registered in Wyoming to Steve Eichler, who, according to his personal website, is the PAC’s founder and president as well as “Founder and C.E.O. of Tea Party.” Fundraising emails accounted for the bulk of the Tea Party PAC’s other expenses, according to federal disclosures. Tea Party PAC did not respond to a request for comment.

Other groups, like Support American Leaders PAC, use Trump’s voice on robocalls to pitch donors.

"On behalf of the Trump family, we wish everyone a merry Christmas and a happy, happy New Year," says one call offering donors a Trump family Christmas card in exchange for a donation, according to robocalls collected by the company Nomorobo.

Though Support American Leaders PAC has raised more than half a million dollars this year, according to disclosures filed with the FEC, the group has not reported spending any money — not even on the robocalls raising the funds.

A growing market for MAGA merchandise

These Facebook pages, which sometimes mimic the Trump campaign and the RNC, don’t typically register as political committees, making it impossible to know how much money they bring in from sales.

The President Donald Trump Fan Club, which has spent $876,668 and amassed 1.5 million followers, sells pro-Trump beanies, sweatshirts and calendars, among other wares. It sells the MAGA merchandise alongside photos and conservative memes, videos and photos. One recent ad sold a red hat with “MAKE CHRISTMAS GREAT AGAIN” emblazoned in white across the front.

“What do you love more?” the advertisement asks. “Christmas or Donald Trump?” The hat is “FREE while supplies last,” but shipping is $9.95.

The President Donald Trump Fan Club is the biggest pro-Trump advertiser, but a legion of other pages with titles like Donald J. Trump — USA, President Trump 2020, Trump’s Ladies and President Trump’s Patriot Army have all cropped up online, too.

In a few cases, the Trump campaign’s public shaming has prodded groups to change.

The Presidential Coalition, a group affiliated with vid Bossie, the former Trump campaign official, started spending significant amounts of money supporting Trump’s economic agenda and opposing impeachment after an analysis by Axios and the Campaign Legal Center showed that the group spent only 3 percent of the millions it raised on direct political activity. And a super PAC run by Corey Stewart, a former Trump campaign official who ran for governor in Virginia in 2017, changed its focus from Trump to down-ballot Republicans after the Trump campaign publicly lashed out at the group.

But most of the wannabe Trump PACs have paid little heed to the Trump campaign’s calls.

Aside from public statements, “the practical recourse is to monitor these groups for fraud,” said Jan Baran, former counsel for the RNC. Fraud is difficult to prove, though the Justice Department has recently indicted individuals for the first time on wire fraud charges related to running scam PACs.

But curbing online sales of goods, especially anything that doesn’t violate a specific trademark, is a challenge, Baran said.

What is tech doing to protect the whistleblower’s identity? Not much, experts say

Greece turns to China to connect its far-flung islands to the electric grid, leaving Brussels in the dark