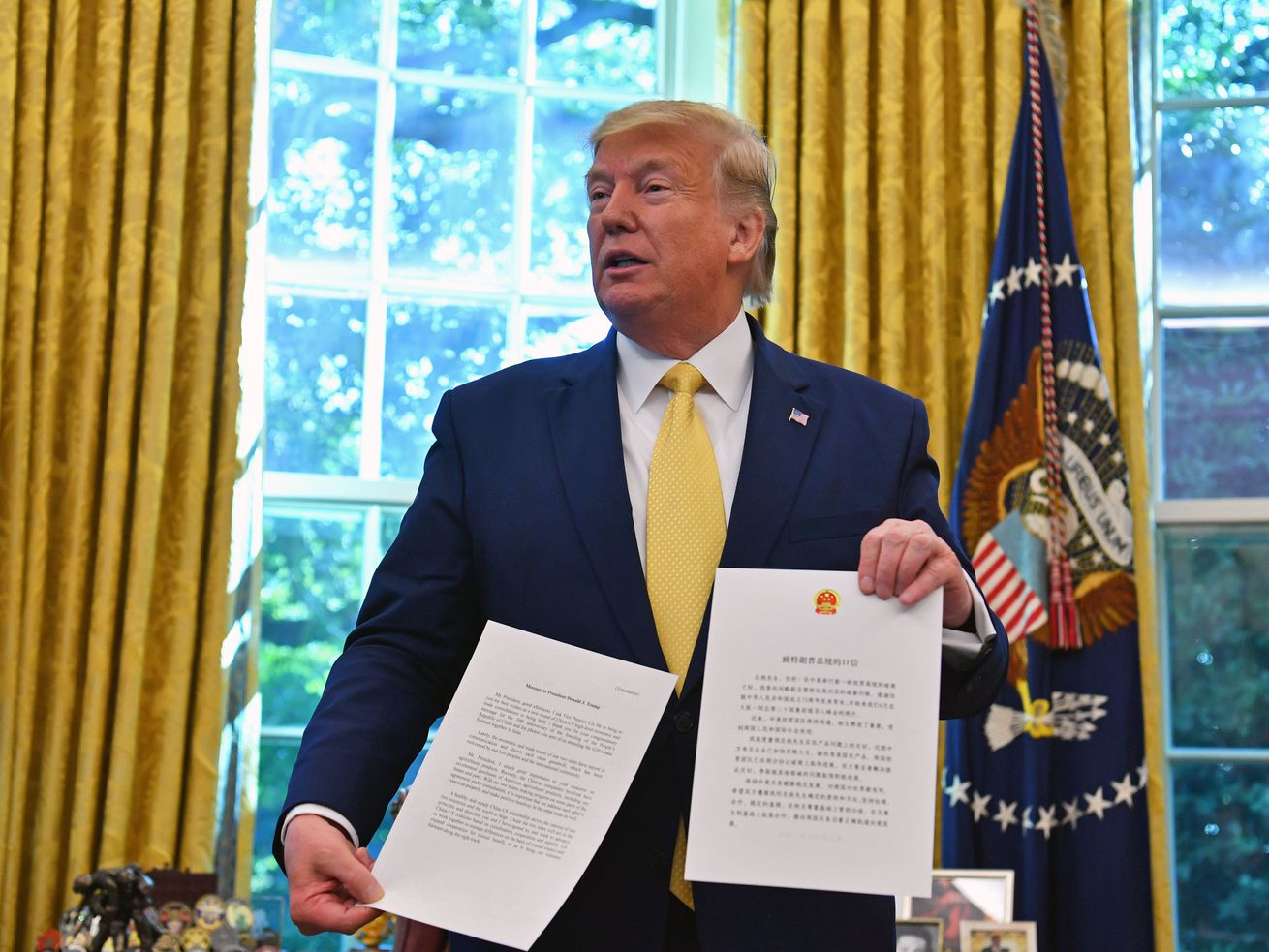 The full details won’t be known until signing. But it might not be quite what the president promised.

After more than a year of negotiations, billions of dollars in tariffs, moments of intense escalation, and temporary detentes, the United States and China are signing “phase one” of a trade agreement.

And this time the deal’s actually happening. Depending on how you define “deal.”

This “phase one” agreement — which the US and China reached in December — will cool trade tensions between two economic superpowers that have rattled the globe.

But it stops short of the comprehensive trade and reform agreement the Trump administration wanted when it launched its trade war with China in 2018.

Instead, China has agreed to make purchases of about $200 billion worth of US goods over a two-year period, including almost doubling its agricultural purchases to $40 billion.

China also made concessions on intellectual property, currency, access to financial services, and it’s promised to halt the practice of forcing companies to turn over their technology, according to the United States Trade Representative.

The US, in exchange, will call off and reduce some tariffs, though taxes on some $250 billion in Chinese goods will stay the same.

The details of this partial agreement aren’t fully known, as trade officials said the text of the deal wouldn’t be released until the signing on Wednesday, and Politico reported that some details may never be made public.

Enforcement is the big unknown of this deal, including how tightly bound China is to increasing these US purchases and what formal mechanisms exist for the US or China to challenge the other if they feel someone’s not living up to the bargain.

And right now, China’s commitments on things like intellectual property rights or forced technology transfer are still fuzzy — and may be steps China had already started taking before Trump initiated his trade war.

President Donald Trump is selling this deal as a win, but the administration did not get the structural changes to China’s economy that it wanted, including tackling thing like Beijing’s huge subsidies to Chinese companies. It’s still not clear if China can or will fulfill this obligation to buy US products, and even if it does, the guarantee is only for two years.

Given all that, this partial trade deal might not be able to make up for the pain that the trade war caused.

“I wouldn’t call this a trade agreement,” Marc Busch, a professor of international business diplomacy at Georgetown University, told me. “It’s more a cessation of hostilities, phase one, coupled with some barter.”

The Trump administration has dubbed this deal “phase one,” implying that this is just the beginning, not the end of its negotiations with China. Robert Lighthizer, the Trump administration’s top trade representative, admitted that the US and China still have a lot to resolve on those big structural issues.

But some experts are skeptical phase two is going to be a thing.

“Phase one, and done” is a phrase that’s going around, said Brad Setser, a senior fellow for international economics at the Council on Foreign Relations and former US Treasury official. “It’s hard to see how you get to a phase two,” he told me.

“In some sense, phase one was made possible by the recognition that China wasn’t willing to move on the big, structural issues,” Setser added.

In other words, this might be the best deal the administration can get from Beijing right now. A “phase one” trade deal is clever branding, especially if, as the administration and Trump himself has hinted, phase two negotiations won’t start until after the 2020 election.

Trump’s trade deal, then, is more of a trade truce between the world’s two biggest economies, which is good for the US, China, and the rest of the world.

But this is not quite the “historic” deal the president is claiming — though he’s going to sell it that way, no matter what.

A deal is better than no deal, but don’t expect much more

Washington and Beijing have been locked in a trade dispute for nearly two years. It’s not over with the signing of this partial China deal, but it’s a reprieve from months of uncertainty and threats of tariff increases.

The two sides announced the deal in December, but the text remained largely under wraps until the signing on Wednesday.

As of last Friday, the White House had not seen the Chinese translation of the approximately 85-page deal, Reuters reported. Chinese officials also have not publicly discussed much about this phase one deal — Washington is the party talking about Beijing’s commitments.

This might seem minor, but last spring, the US and China were reportedly close to a trade deal, but talks broke down after Chinese officials made changes to the text and backed away from some of their commitments. US officials, including Secretary of Treasury Steve Mnuchin, have so far said the phase one deal hasn’t changed in translation.

The big-ticket item that’s been advertised is China’s commitment to purchase $200 billion in US good over two years, including $40 billion in agricultural products and about $75 billion in manufactured goods.

That sounds like a lot, but a few things to keep in mind: The US-China trade war hit American farmers hard, especially in products like soybeans. Recovery isn’t likely to happen overnight, and even Treasury Secretary Steve Mnuchin has said it will take time for China to “scale up.”

What’s more, experts told me that China very much needs certain agricultural products, such as soybeans and pork (a swine fever outbreak wiped out its supply), so it was certainly already looking for places to fill that need. The question is whether this deal now makes it more likely China will import those products from the US, or if China would have moved in that direction anyway even without the tariff mess.

And this all depends on whether US farmers can have the capacity to produce this amount, which some experts say is also in doubt.

According to the USTR, the deal also “addresses numerous longstanding concerns” over intellectual property, and to that end China “has agreed to end its long-standing practice of forcing or pressuring foreign companies to transfer their technology to Chinese companies” as a condition for doing business there.

The deal will also modestly open up financial services in China to US companies and agree not to manipulate its currency. (The US will no longer label China as a currency manipulator.)

Experts told me that with all of these commitments, the devil is in the details. China was already moving toward strengthening some of the laws and policies around these issues before Trump started his trade war, and on top of that, it’s supposed to fulfill these promises under World Trade Organization (WTO) rules.

“So if China makes commitments in the phase one deal in connection with those things, it is in a sense committing to things it’s already committed to do,” Mark Gold, a professor in international trade law at Fordham University, told me.

As for the United States, it canceled additional tariffs on about $160 billion of Chinese goods that were originally slated to go into effect in December 2019. It will also cut in half tariffs on $110 billion in goods introduced in September — but keep existing 25 percent tariffs on $250 in Chinese products. So duties will remain on some $360 billion in Chinese good.

The administration says it will review China’s progress, likely in 10 months — so right around the 2020 US presidential election.

And that’s it. It’s a modest deal with a lot of question marks still attached. But some experts, like Scott Kennedy, senior adviser and trustee chair of Chinese business and economics at the Center for Strategic and International Studies, said it’s still “better to have this deal than to not have” it.

“It has certainly calmed financial markets, and it has stopped the outward freefall in the relationship, and there are some elements of this deal that are good for Americans and make China’s economy a little bit more open,” Kennedy told me.

He cited the modest changes to intellectual property, forced technology transfer, more modest access to Chinese financial markets, and there’s a process to settle disputes. Those are wins, even if minor, for the administration.

“On the other hand,” Kennedy added, “it’s a very narrow deal. It’s far short of the administration’s original goals, and the US and the international community has paid a very large price for what is a relatively modest deal.”

Or another way of putting it: Trade wars are not good, nor easy to win. Of course, in the administration’s telling, officials aren’t not done yet. This is just the preliminary deal to something greater.

“We’re keeping the tariffs on because we’ll use that for another one,” Trump said at a rally in Toledo, Ohio, this week, likely referring to the “next phase” of this trade agreement that is supposed to tackle the big structural issues in China’s economy, such as subsidies for companies or state-owned enterprises.

The problem is few experts think that such a phase two is possible. It’s much more likely the US settled because this is all they could get out of China — and for Trump, it was worth it to have something he could brag about ahead of the 2020 election.

“This is not success, this is Donald Trump’s theater of success,” Gold told me. That doesn’t mean China and the US won’t talk, or at least make an effort at negotiating. Indeed, the US and China just announced they’re holding semiannual talks to discuss reform and disputes.

“Guess what?” Gold said. “We had that before Trump, and they were discontinued because of Trump. Almost everything Trump accomplishes is basically solving a problem that Trump created.”