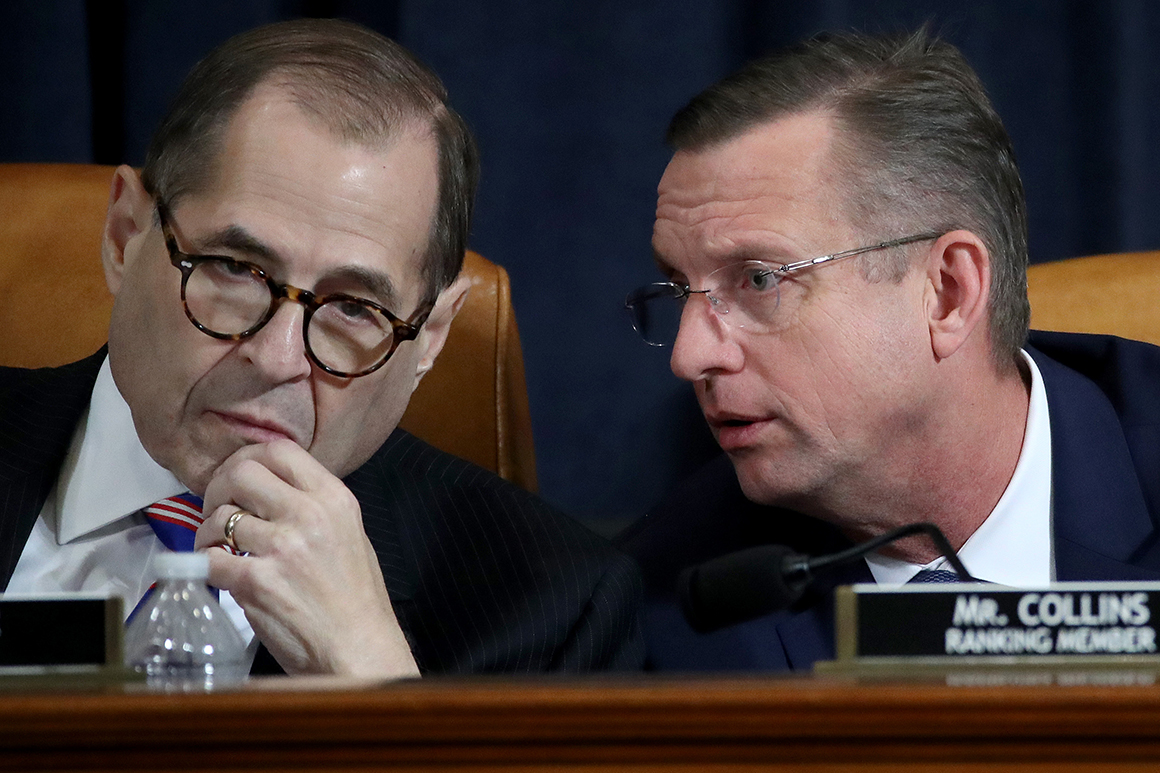 The White House will not participate in future House Judiciary Committee hearings that are designed to outline evidence in support of President Donald Trump’s removal from office.

In a one page letter sent to Judiciary Committee Chairman Jerry Nadler (D-N.Y.), White House Counsel Pat Cipollone criticized the ongoing impeachment inquiry as “completely baseless” and that it violates “basic principles of due process and fundamental fairness.”

“As the President has recently stated: ‘if you are going to impeach me, do it now, fast, so we can have a fair trial in the Senate,’” he wrote.

The White House does not plan to cooperate, according to a senior administration official who responded to a follow-up question.

The decision is not a surprise. The White House didn’t participate in this week’s hearing in which four constitutional experts testified. No attorney was present to represent Trump’s interests, not even a staffer to sit in the audience.

In a separate letter Friday, Georgia Rep. Doug Collins, the top Republican on the House Judiciary Committee, requested several additional witnesses for the panel’s impeachment proceedings. The list is largely identical to the one Intelligence Committee Republicans had requested, and Democrats are similarly unlikely to heed Republicans’ demands.

The Judiciary Committee will meet Monday, though it did not release the names of its witnesses or scope of the hearing into Trump’s attempts to pressure Ukraine into investigating former Vice President Joe Biden and his son Hunter Biden.

So far, the Trump administration’s strategy for the final stages of the House impeachment process has been to refuse to engage unless certain demands are met, blast Democrats from the outside in the meantime and wait for a friendlier Senate landscape.

After weeks of frustration, Trump has been placated by House Republicans’ increasingly pugilistic defenses of his behavior in hearings and on television, giving him greater comfort that he can rely on surrogates to punch back during the hearings.

Speaker Nancy Pelosi announced Thursday that she asked House committee chairmen to draft articles of impeachment as soon as next week, meaning a final impeachment vote could come before the end of the year.

Trump’s legal and political aides have argued that participating in the hearings would only legitimize the process, even as it leaves the door open to negotiating with Democrats.

Democrats say Trump conditioned a much-desired White House meeting for Ukraine’s leader, as well as millions in military aid, on Kyiv launching a Biden probe. Trump and his personal attorney Rudy Giuliani counter that the probe was part of a broader effort to eradicate corruption — they allege Joe Biden, as vice president, helped protect his son’s business interest in the country. No public evidence has emerged that Biden intervened on his son’s behalf in Ukraine.

The White House didn’t send anyone to fill the seats the House Intelligence Committee reserved for Trump officials during the two weeks of impeachment hearings that concluded late last month. Instead, informal Trump allies peppered the audience, including former 2016 deputy campaign manager David Bossie and a few House GOP members, including Reps Matt Gaetz (R-Fla.) and Mark Meadows (R-N.C.), who are not on the Intelligence Committee.

The White House knows its participation is unlikely to sway any lawmakers. Members are expected to vote, largely along party lines, in favor of impeaching Trump, sending the process to the Senate for a trial over whether to convict Trump and remove him from office. There, the Republican majority will likely prevent Democrats from obtaining the two-thirds majority vote needed to oust the president.

Polls showed an uptick in support for impeachment soon after the Ukraine scandal surfaced, but the momentum has slowed, hovering around an even split both for and against impeachment.

If the process moves to the Senate, though, the White House will likely reconsider its no-engagement strategy. Trump’s advisers believe Senate Majority Leader Mitch McConnell would set ground rules that are more favorable to the president’s legal team.

The Inspiration Behind Thief Simulator, Available Now on Xbox One

Some development aid gets misdirected. Did the World Bank try to suppress a paper saying so?