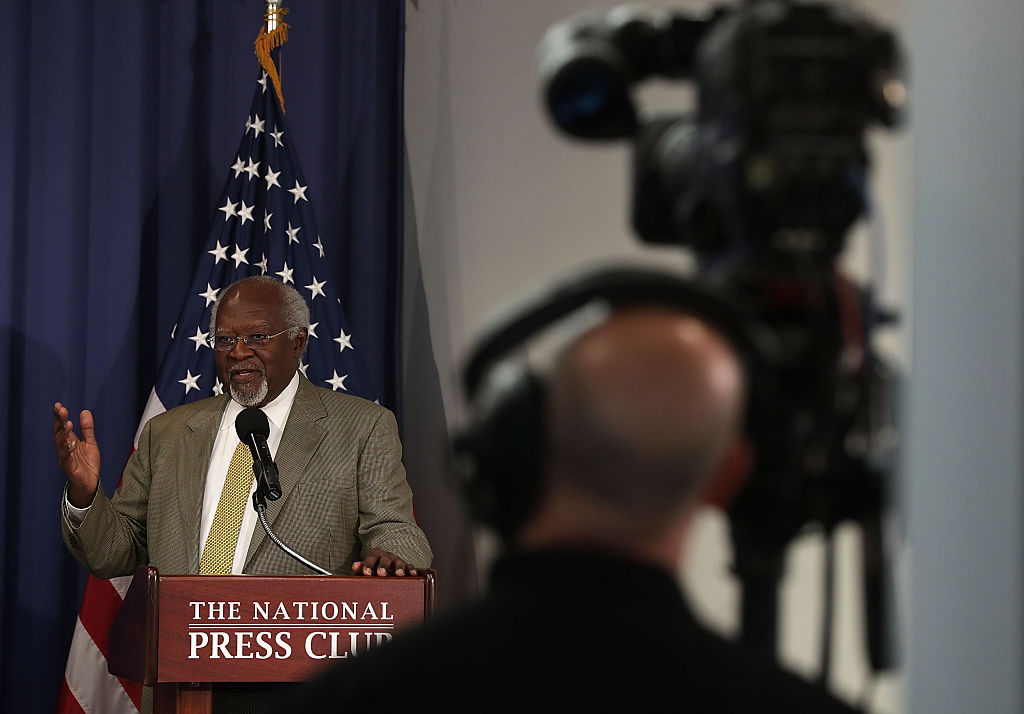 Source: Julius Garvey, youngest son of prominent Pan-Africanism movement advocate Marcus Garvey, speaks during a news conference on what would have been his father’s 129th birthday at the National Press Club August 17, 2016 in Washington, DC. / Getty

The living descendants of Marcus Garvey, whose work in the United States helped give birth to the Pan-African movement, have spearheaded a global effort to have his name exonerated by getting a posthumous pardon from President Joseph Biden.

As reported by the Washington Post, there is a surmounting effort by Garvey’s descendants to request that the Biden presidential administration live up to its words of seeking to correct racial injustice in America by granting a posthumous pardon of Garvey for his conviction of mail fraud in 1923. “President Biden has made statements in his inaugural address about the dream for justice not to be delayed any longer,” said Julius Garvey, 88, a vascular surgeon and one of his sons who currently lives in New York. “We will take him at his word. Racial injustice was done to my father more than 100 years ago. He committed no crime. What he was trying to do was elevate the status of African Americans and Africans across the world.” The push for a pardon comes as many voiced displeasure over the egregious and controversial pardons given out by the former Trump administration.

The efforts of Garvey’s living offspring are backed by other activists, scholars, and the Caribbean-American Political Action Committee (C-PAC) who have initiated a petition to compel President Biden to issue the pardon by March 2022. “Our goal is to get at a minimum 20,000 signatures from each of the five continents,” said Dr. Goulda Downer, C-PAC chair when contacted about the petition. “We will ask President Biden to honor the voices of our global citizens and make amends for the 1923 unjust persecution and imprisonment of the Honorable Marcus Garvey.” The aim is to get 100,000 signatures, with a huge engagement campaign slated for February 2022, which is also Black History Month. This is the latest push to exonerate Marcus Garvey. Representative Yvette D. Clarke (D-NY), whose parents are also from Garvey’s birthplace of Jamaica, introduced a resolution in the House calling for him to be pardoned in February 2021. “I think he owes something of his presidency to African Americans. It is time for this to be righted with someone whose only crime was to help his people,” Julius Garvey said of his hopes President Biden will help. When contacted, the White House had no comment on the potential pardon.