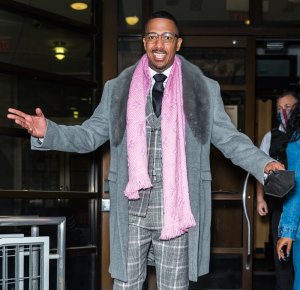 Nick Cannon is known for many things and that includes his sprawling media empire and his prolific fatherhood abilities. Adding to his list of accolades, Twitter took notice of the entertainer’s “situation” and the social media network is rife with the thirst.

A savvy Twitter user by the name of @DallasScorpio92 used their eagle eyes to zoom in on Cannon’s crotch, which seemingly has Cannon’s “cannon” on vivid display. The slack, like most suits in the modern era, is extremely fitted to Cannon’s frame so there might not be any mistaking what lurks below Cannon’s waist.

Of course, it isn’t like Cannon walked out on stage and showed off the hammer all nilly-willy but the bright lights of the studio and Twitter being Twitter, the print is getting all the folk online hot and bothered.

Cannon hasn’t responded to the brouhaha just yet and any classy gentleman wouldn’t, but leave it to Twitter to speak up in his stead all the same. You know, maybe Cannon was a little excited after saying he was going to be celibate earlier this year.

Check out the reactions to Nick Cannon’s little guy below.