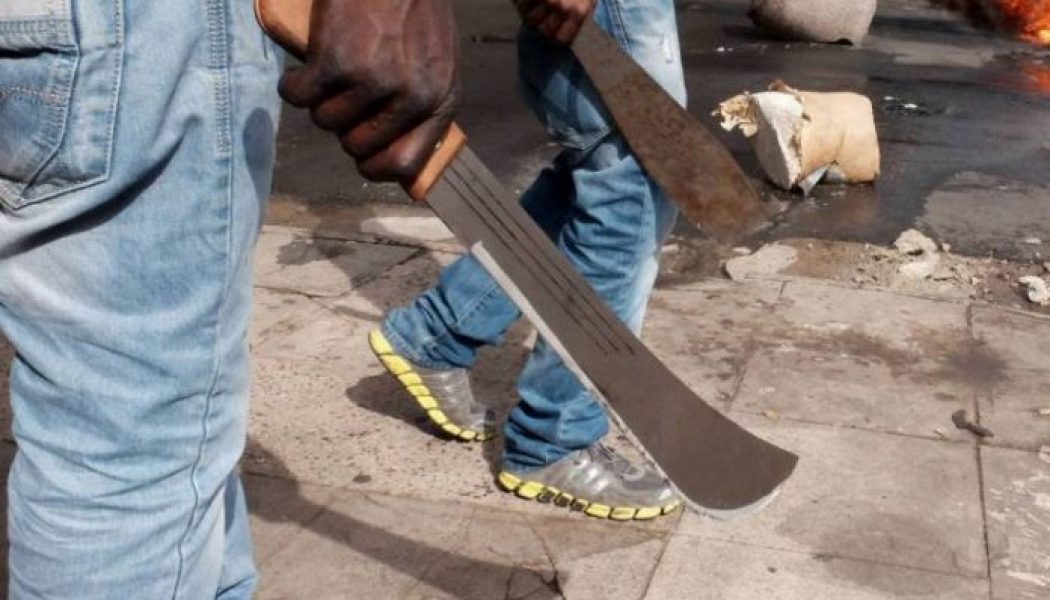 Perplexed after the order by President Muhammadu Buhari on a total lockdown of Lagos and Abuja amid the spread of the coronavirus pandemic, residents of Egan-Igando area of Lagos state, who had always maintained their crowd in major meeting points, had to come to skepticism on movements and trading system.

Egan-Igando, an area under the Alimosho Local government of Lagos state, is a community that houses home based residents, several businesses, shops, religious organisations, market places and a district police station ; all which are filled up with people during the usual routine movement.

Nearly a week into the lockdown, reports on the robbery attacks perpetrated by the ‘one million boys’ gang has gotten to community residents with every household ensuring safety of their lives and properties.

Reports gathered was that the gang had gotten to neighbouring communities like Ikotun, Ayobo, Isehri – Egbeda and in no time would make entrance into Igando (the major road that leads into Egan town).

Several meetings, to this regard, was held with landlords, security representatives, police officers and notable personalities on the need to intensify securities during the night.

Unfortunately, this decision had to take a swift review when reports that the gang were attacking residents in Modina, Agric Road and its environs. Some other community residents confirmed that they had seen the gang transporting themselves on motorcycles in pairs. About five motorcycles were confirmed to have been seen.

The landlords held several meetings in various streets and came to an agreement to become slef-night guards in the street, with the sole aim of safeguarding properties and lives.

They, similarly, agree to armed themselves with weapons like cutlass, knifes, iron, bottles and other sharp objects that could be used to protect themselves.

On the 13th of April 2020 kick started the first night guard service. It was a voluntary but mandatory exercise for men in the street. The first task was to burn tyres in major points as signal lights then spilt themselves into groups to spread out to corners.

The night guarding was to start at 11pm till 4am. A signal sound, banging of irons and polls was done to gather people out. Also, at intervals whistle were blown as signal sounds.

These exercise lasted for about three weeks continuously carrying out the same process.

During these days, some residents in some area fell victim after walking back to their homes at mid night. Some were punished, delayed, interrogated and sent back to wherever they came from. Other residents who fell victim of night guards were disciplined, beaten or injured as they had who proven stubborn to instructions.

After several encounters, the rules were relaxed and revisited. Residents were informed not to make any movements whatsoever between 12am to 4am, as any caught would be arrested immediately without questioning.

Nontheless, at the first two weeks, the Igando police was said to have been notified about the pandemonium, which the DPO assured to send out patrol teams to different areas at night, a street chairman, Mr Tosin, confirmed.

He also added that the DPO instructed all street chairman to stop burning tyres as they would also be involved in night guarding.

One resident, who spoke under anonymity said, “We have had unrest due to the activities of the one million boys. We got a message from them some weeks ago stating that they would be visiting our area and failure to do so would result into crisis. Their activities has really affected everyone here as we no longer sleep.

“We have always stayed awake all night to keep watch over the community. Although, we had two cases here. Everyone is now scared of going out or walking alone because they never can tell when their next strike is.”

Another Mr Moshood said, “In certain areas, some of these guys were caught, macheted and killed. This I believe drove fears into them and their attacks begins to decline and gradually waned off, but till now,we still sleep with one eyes open awaiting to repel any spontaneous or sporadic attack from the ‘One million Boys”

Speaking to a house owner, Mrs Ogunbiyi, who gave a comprehensive narration, she said”At first, we only heard of it, the terror some ‘bandits’ caused certain areas especially around the outskirts of Ogun state such as Iju, Otta,etc to interior Lagos such Ikorodu, and we offered them our moral and spiritual support through prayers. Little did we know what would befall us few weeks after.

“It started as rumours that these group of thieves or robbers as the they may appear are beginning to terrorise Lagos environs, but most people dispel it as mere rumour, saying its not possible given the presence of the Police Force. Then came a video that went viral on social media, that is when our ignorance knocked back on us. The video showed how these boys attacked Agege/Orile environ but met with strict resistance from the ‘area boys’ who were prepared with all kinds of crude and assorted weapons. This video did not only tell us the truth about the existence of this bandits but also how we can repel their attacks. In less than 2 weeks, they have taken over major towns in Lagos as their population begin to increase, owing largely to joblessness, hunger and idleness of most youths. The group was called ‘One million Boys’, even if some people argued they are not the real ‘One million Boys’.

“My area was not left out, we wake up everyday to news of them getting closer to Igando my community. Some said they are coming in thorough Ayobo which share just a swamp as border with Egan-Igando, while some rumoured they are coming via Ikotun, but whichever way, we decided against waiting for law enforcement officers for protection, we decided to protect our community our own way taking a cue from the Agege/Orile incident hence an all household vigilante per street commenced massively in my area which actually was done in most part of Alimosho LGA and some other towns around Lagos. Many members of various households were forced or voluntarily joined the vigilante group, every one (male or female) became a night guard. People would come out with weapons of any kind ranging from cutlass to blades of kinds even as low a weapon as stick.

“The experience was terrible, we would keep wake all night, burning tyres and polythene or wood, anything that would keep the street lighted till early hours of the morning. Despite all these, we still wake up to news of areas attacked. We were relentless., we wanted to protect the little property and food we have left in the nationwide lockdown.

“On a particular occasion, myself and some other men and guys on my street rushed to the second street at about past 2am when we heard screams, only to discover it was a child birth that caused the stir. This is how much we dreaded the arrival of these boys. At this period, few paid attention to the on going pandemic, much attention was the pandemonium and hullabaloo these guys were creating in Lagos, we live in fear day and night.”

Days upon days passed, as some landlord, who pleaded anonymity, confirmed that some members of the gang were interfaced and brought to justice.

However, these alleged reports clouded the air as some believed it scared the gang from coming into the community. But till date, the landlords have maintained their guard to avoid any surprises