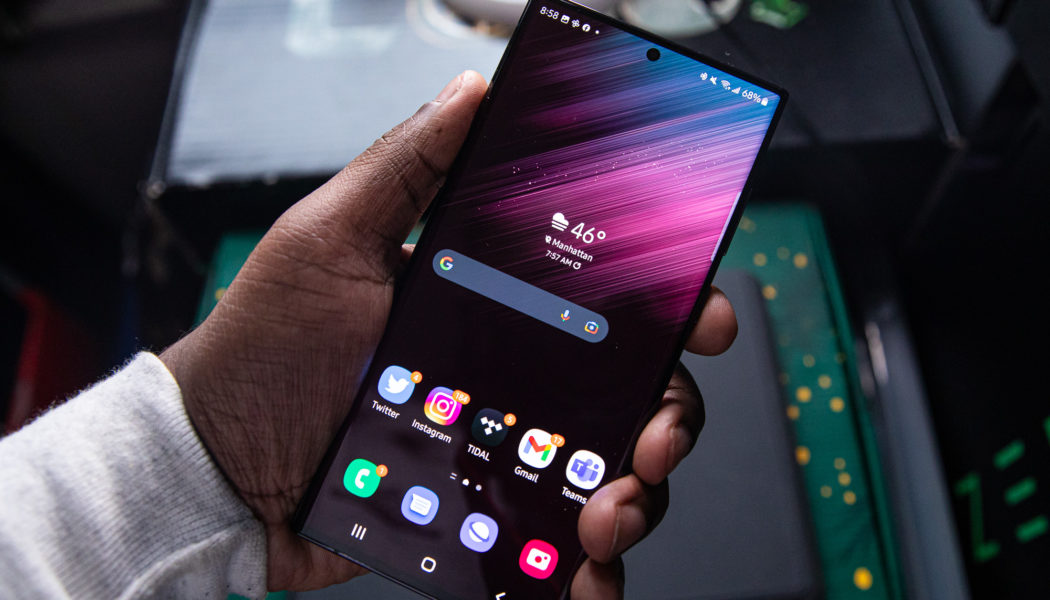 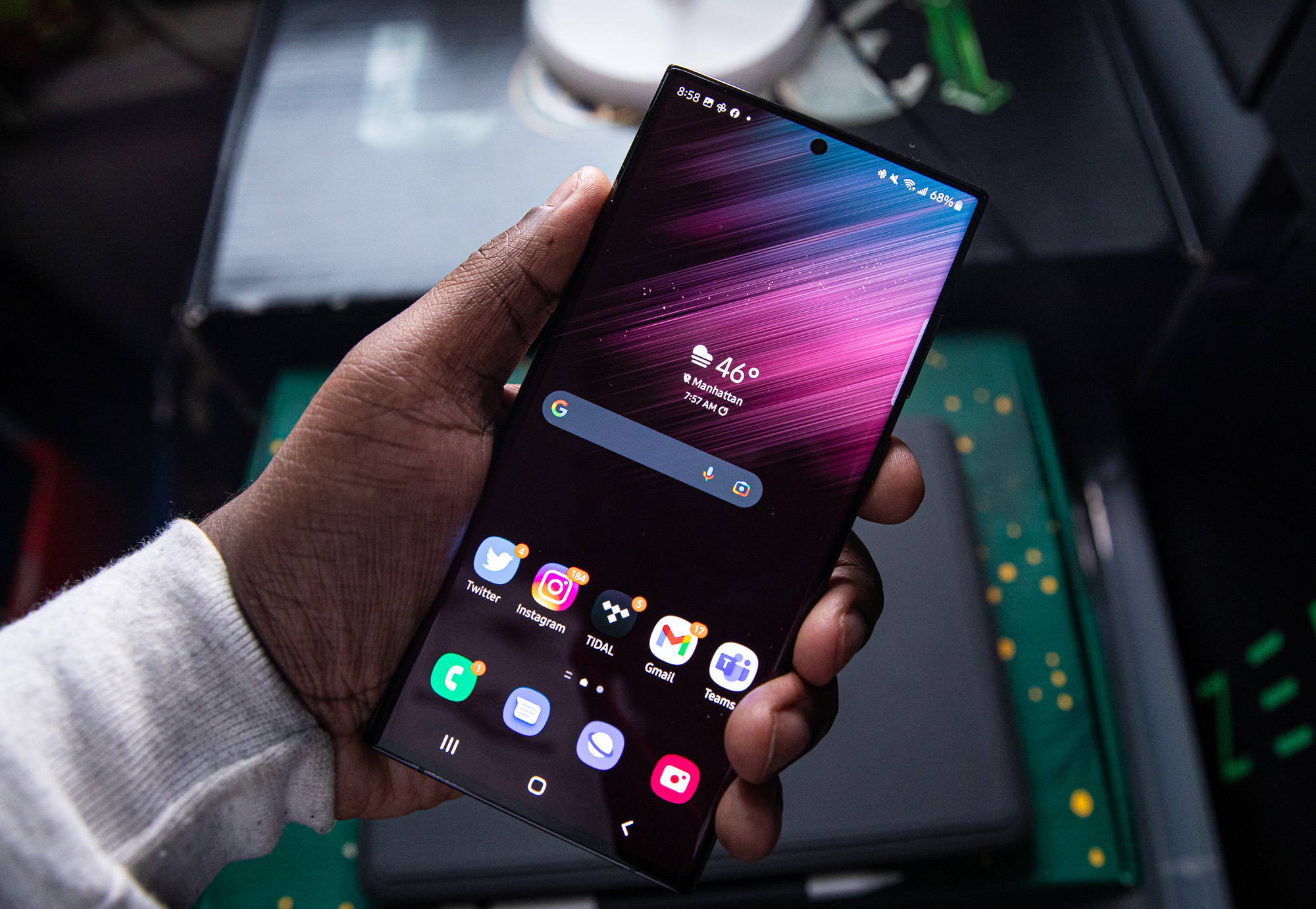 Samsung took a bold step with one of its latest flagship smartphones, and it was a VERY wise decision.

After months of speculation, Samsung casually “killed off” its relatively popular Galaxy Note model, making the exceptional Note20 Ultra the device’s swan song. At the same time, Samsung also decided to keep what made the Note line great and just introduce it into the S22 Ultra model, bringing together loyal Note users and with the other Galaxy smartphone users. A decision that we believe will benefit Samsung in the long run. 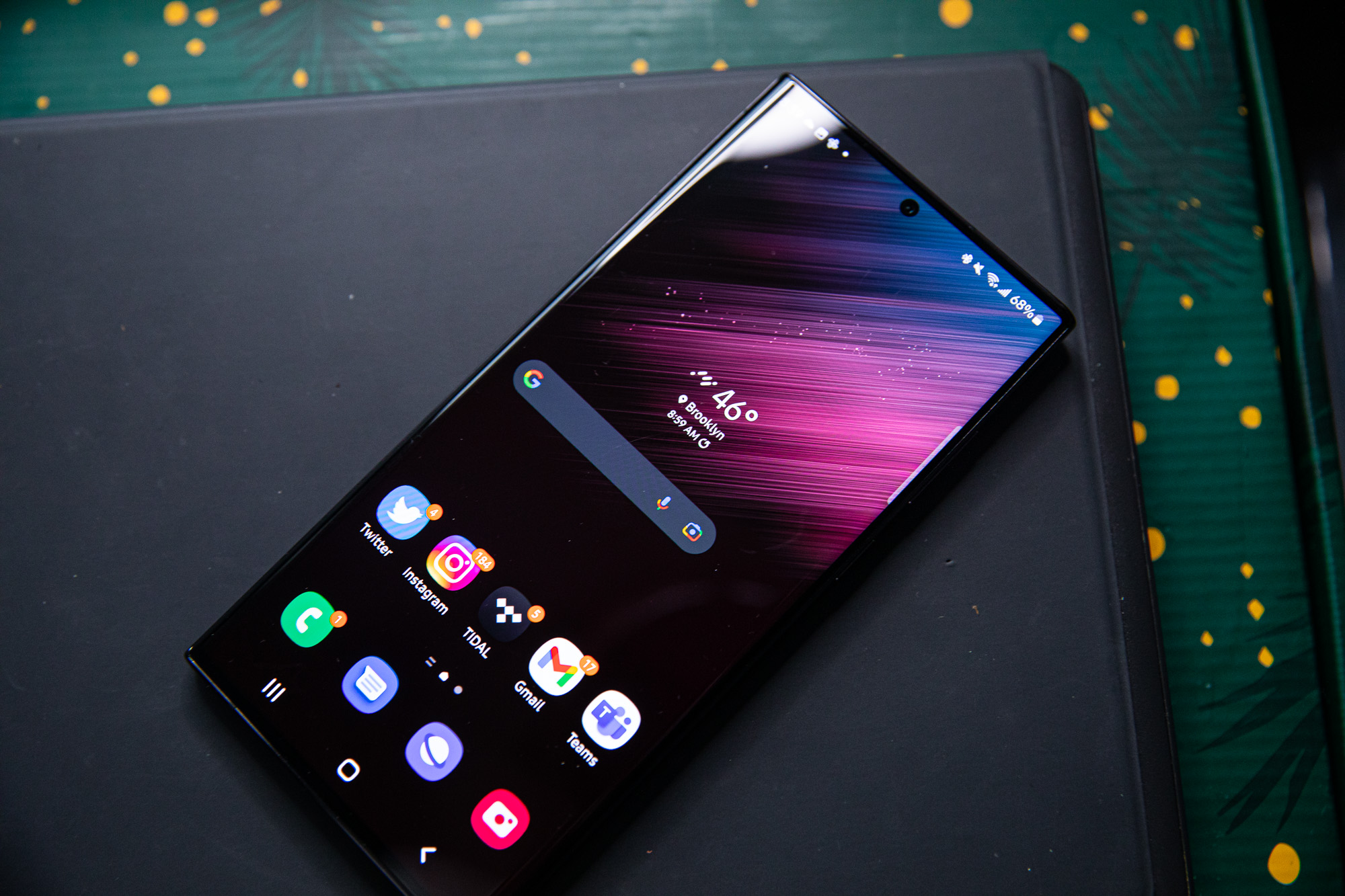 One area where Samsung always delivers with its flagship smartphones is the display, and with the S22 Ultra, the company wins again. The S22 Ultra features a massive 6.8-inch AMOLED screen that is stunning and supports 3088 x 1440 pixels (WQHD+) resolution. By default, the screen is set at 2316 x 1080 (FHD+) out of the box, and that is to conserve battery life smartly. If you want to push the device to the limit while getting busy in Halo Infinite on Xbox Game Pass or watching your favorite Marvel movie on Disney+, you will have to go in your settings to bump up the settings. 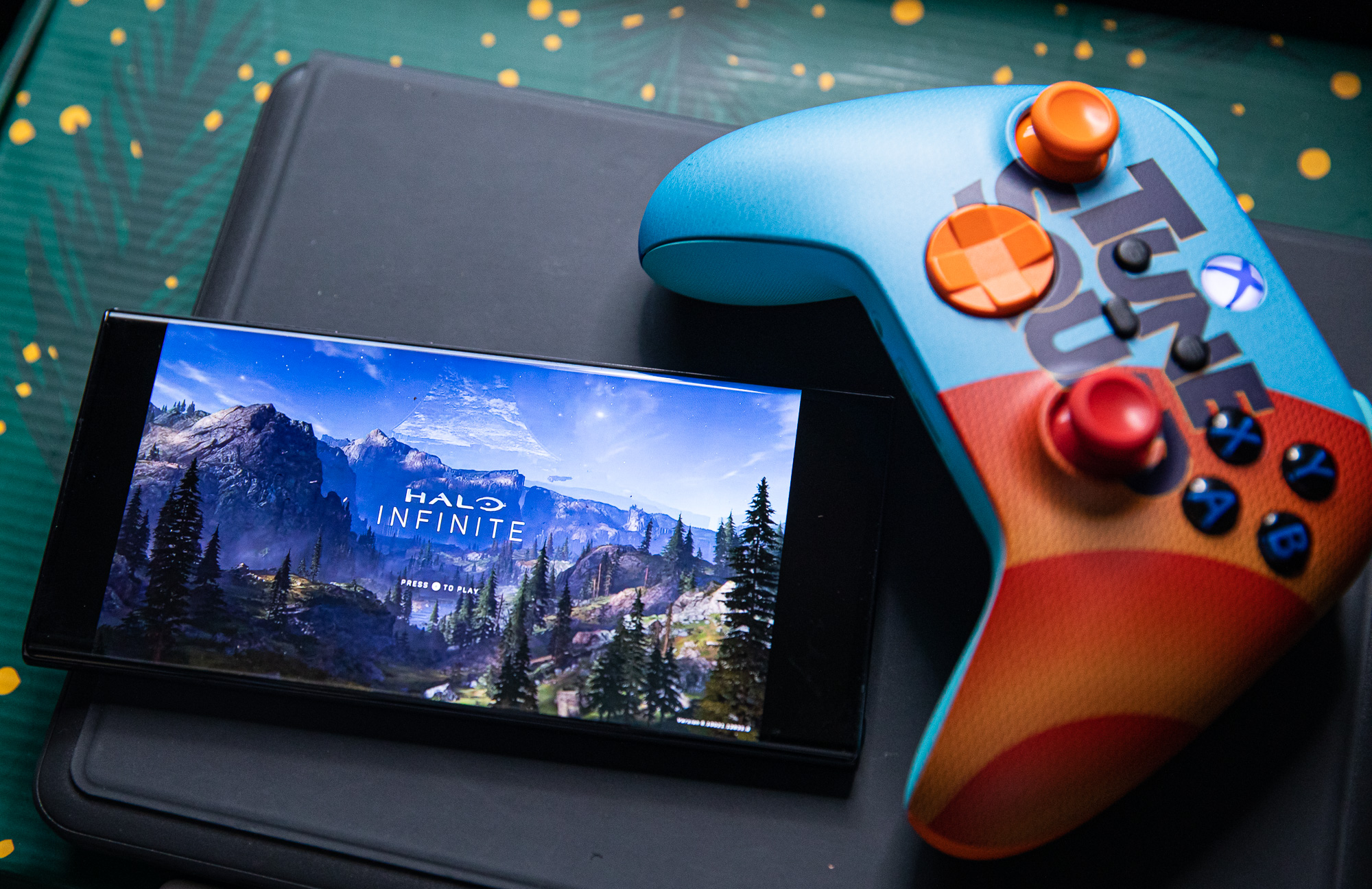 Speaking of gaming, watching videos, or using apps on the  S22 Ultra is a very smooth experience and looks fantastic on the S22 Ultra’s display. The display can switch between 1Hz or jump up to 120Hz. The feature is very impressive as it shows the phone’s ability to prioritize performance depending on what you’re doing. For example, the phone will use a lower refresh rate while using apps, while the higher 120Hz will help take your gaming experience to another level.

Using the S22 Ultra outside on the brightest sunny day isn’t an issue. The phone can hit a whopping 1750 nits allowing the display to remain visible in direct sunlight. 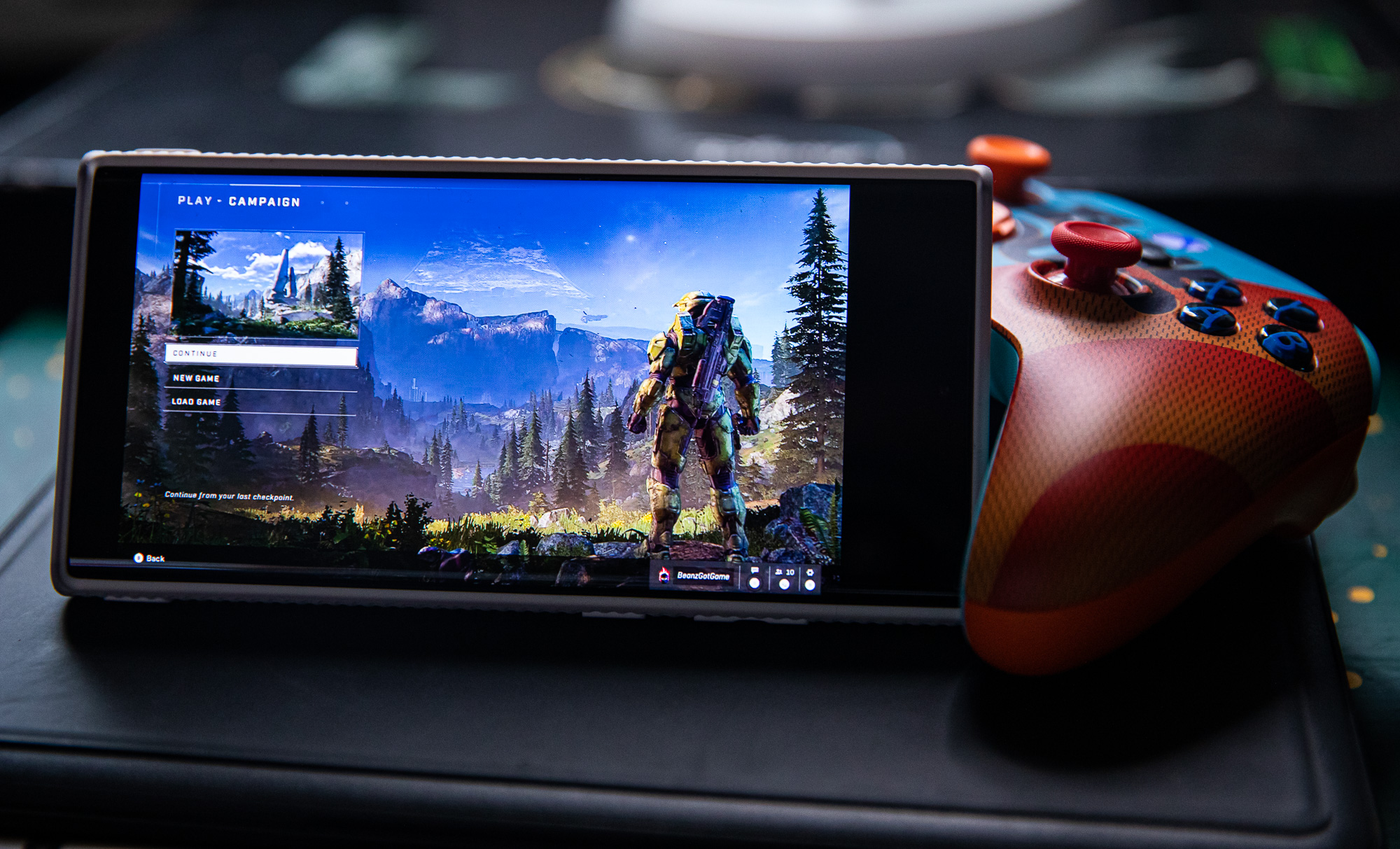 The result is one of the snappiest and crisp displays that Samsung has ever delivered on its flagship smartphones. Amazingly, Samsung continues to be the standard concerning smartphone displays. How long that remains is another story with Apple closing the gap. 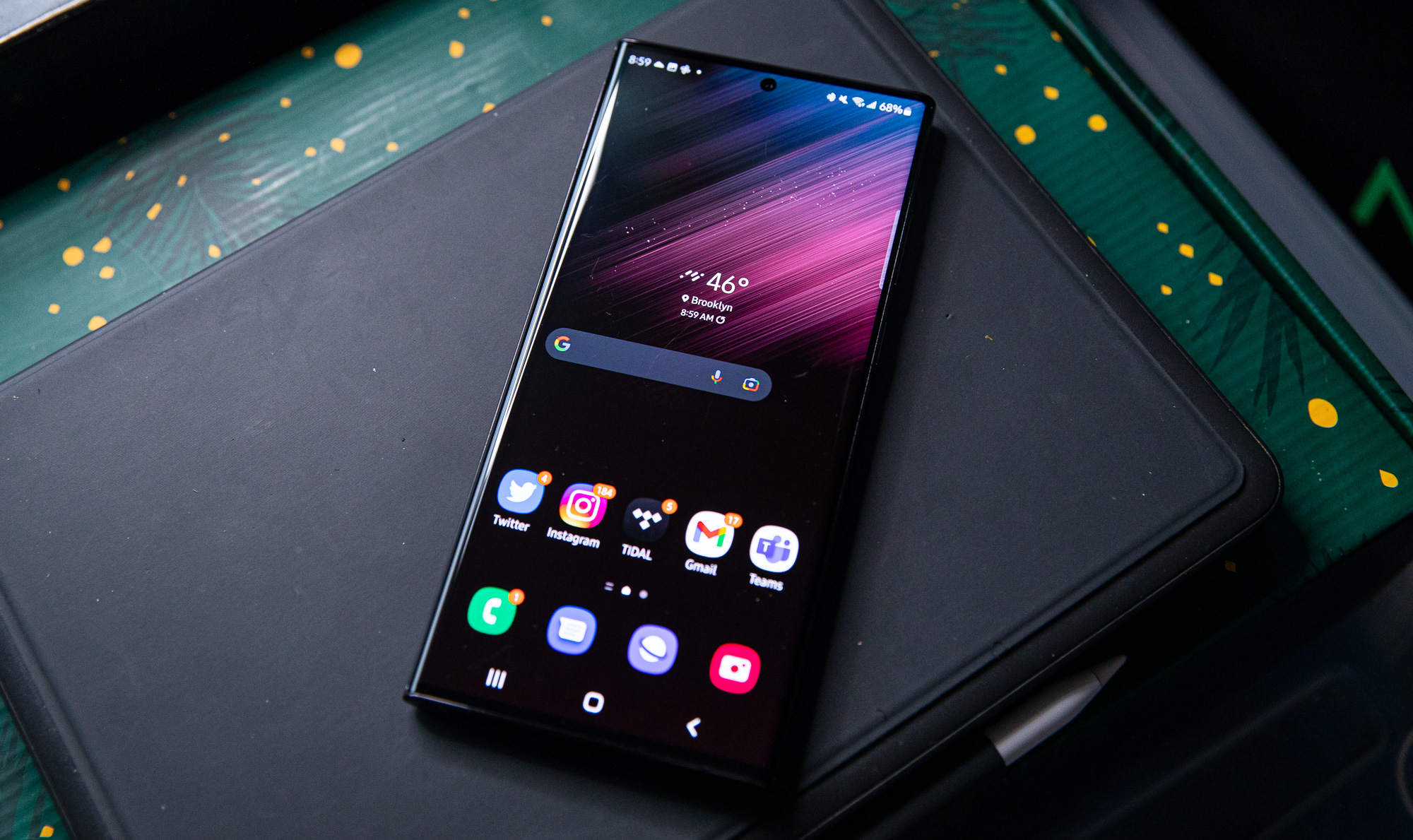 The S22 Ultra takes the “Ultra” theme seriously, coming in at 6.8-inches, easily besting the 6.7-inch iPhone 13 while still feeling much lighter. The phone resembles the design of the Galaxy Note and compliments it with high-quality materials. The phone’s frame is Armor Aluminum with a chrome finish on the outside. In between all of that is Corning Gorilla Glass Victus+ plates. The display features high-gloss, while the back has a satin finish to limit those pesky fingerprints. It works to an extent, but fingerprints or smudging is still an issue.

The front display features a hole punch for the front-facing camera and a built-in ultrasonic fingerprint reader, which we feel ALL phones should have now due to the still ongoing pandemic. The fingerprint reader works very accurately in tandem with the face unlock or pattern unlock. At the bottom of the phone is the housing unit for the S-Pen, the USB-C charging port, and a slot for the SIM card. 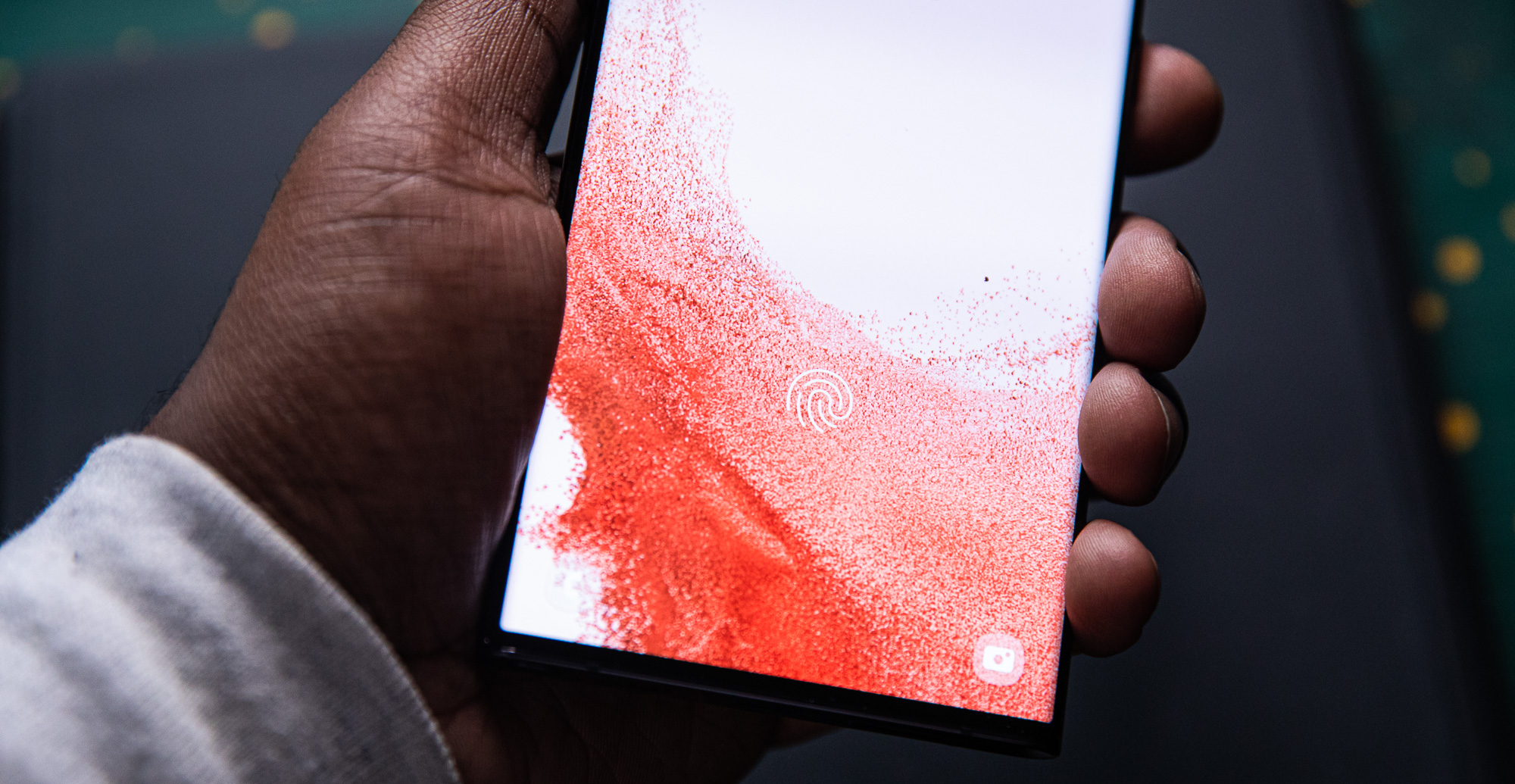 The S22 Ultra is a well-designed and sleek-looking phone that looks good in the Phantom Black, Phantom White, Burgundy, Green, Graphite, Sky Blue, and Red color options. Samsung supplied us with the Phantom Black colorway, and we loved it. 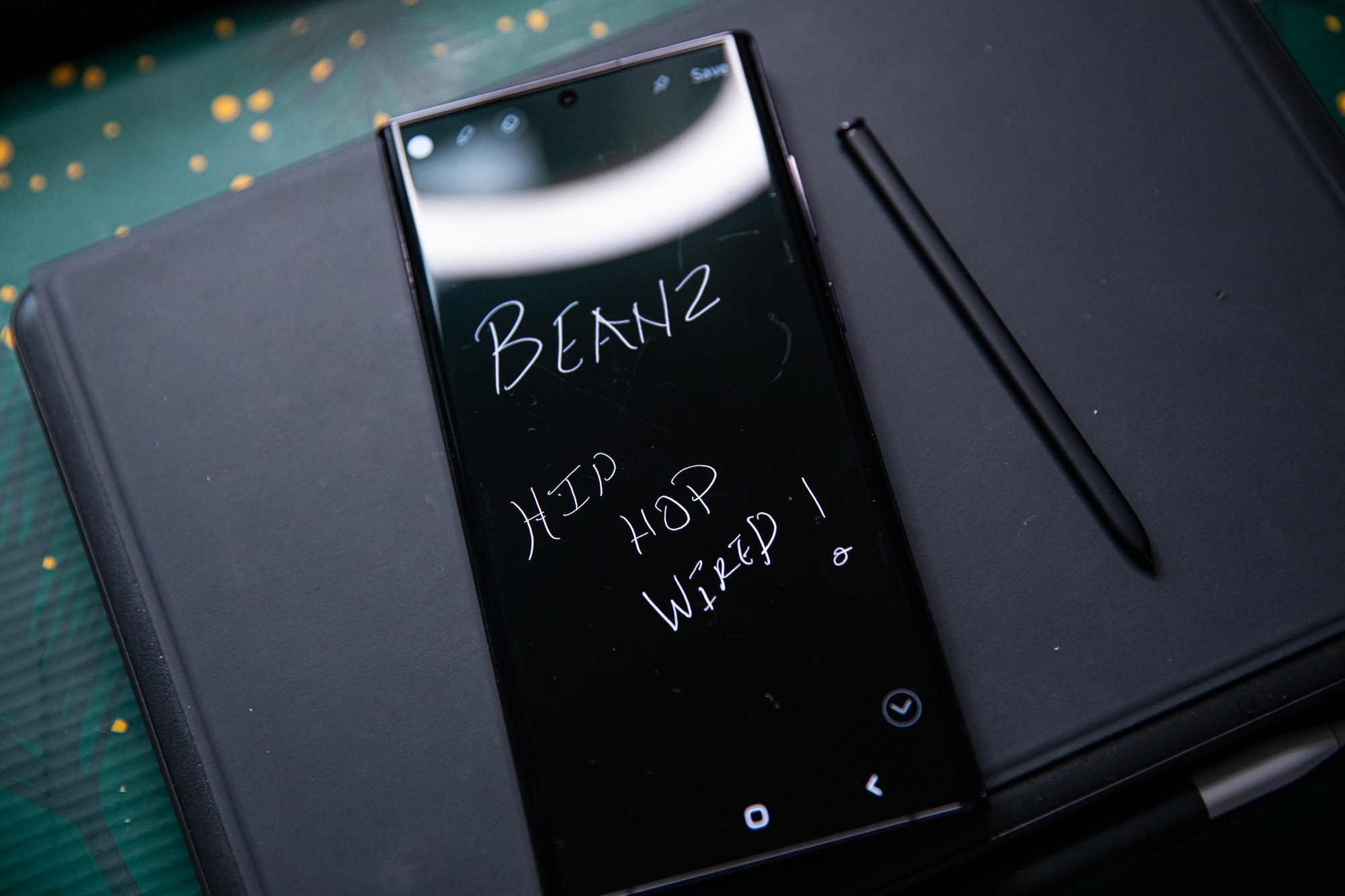 The S-Pen isn’t a grabbing point for us, BUT for the heavy believers in the stylist, this is the best version of the accessory. If you needed any more indication that the S22 Ultra is now the Note going forward, thanks to the location of the S-Pen. Using the S-Pen is a very smooth experience. The latency has been greatly improved. If you thought it was good on the Note20 Ultra, you would appreciate it even more on the S22 Ultra. It feels like you’re writing on paper than on a glass surface allowing you to take accurate notes. 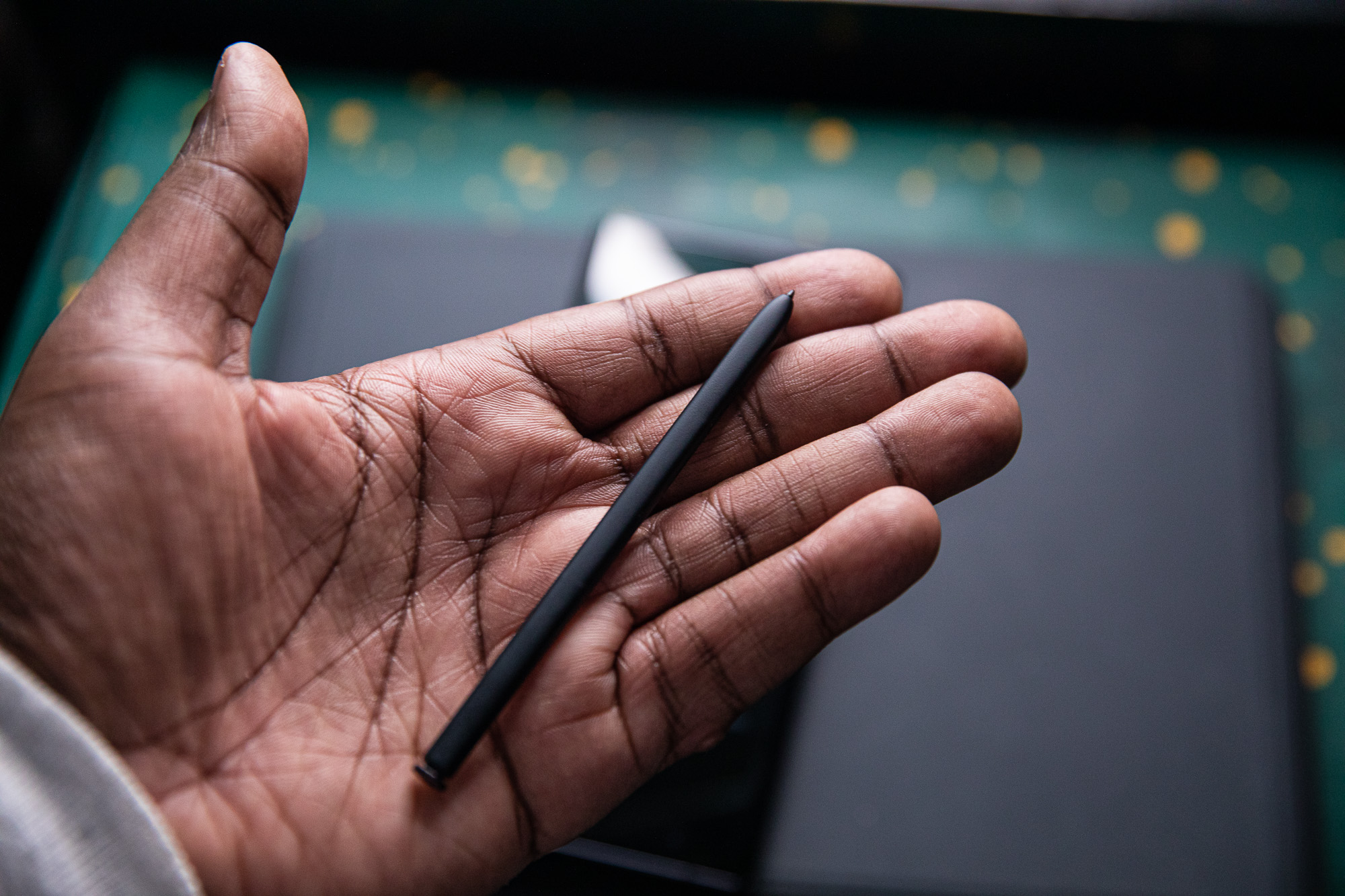 Features like the magnification of small fonts on pages, the ability to annotate everything, screenshot taking being more precise, easier copying and pasting of text, taking selfies by pressing the S-Pen button, and air controls using the S-Pen returns. 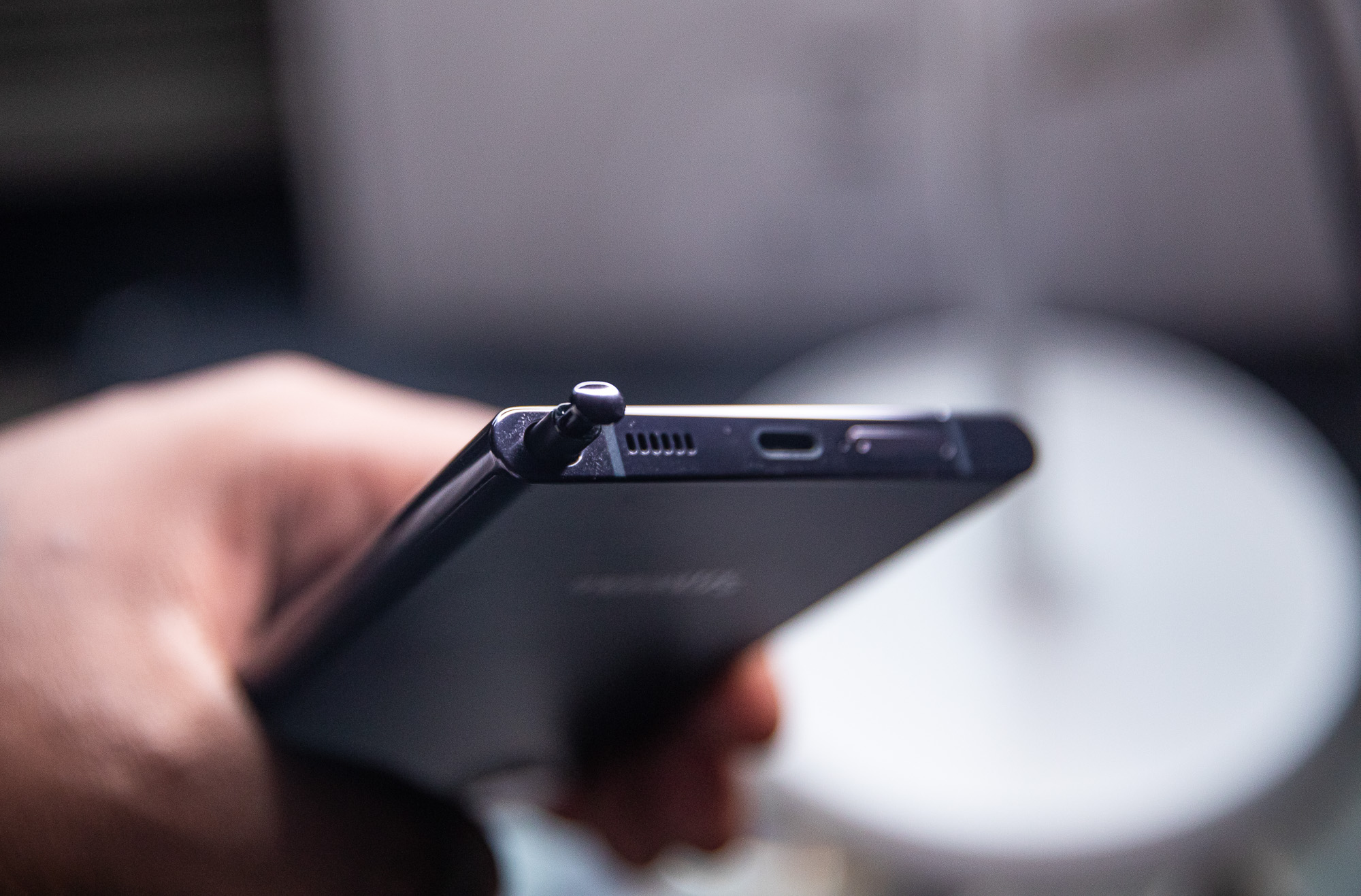 As for battery life, the S22 Ultra delivers the standard all-day battery use for battery life, but that greatly depends on how much you use your phone throughout the day. Inside the phone is a BIG 5,000mAh battery powering the phone that can be quickly charged using a charging brick (sold separately) or through wireless charging.

The S22 Ultra delivered on its all-day use promise, BUT it’s a miss that doesn’t last longer than previous Galaxy models could. Again, we recommend you get your hands on the 45W USB Type-C wall charger that can quickly get you back in the game if you’re low on juice. It’s going to cost you $49.99, unfortunately. Samsung also supplied us with the quick charging brick, and we can confirm it does work as advertised cause it takes no time to get back to 100% battery life. 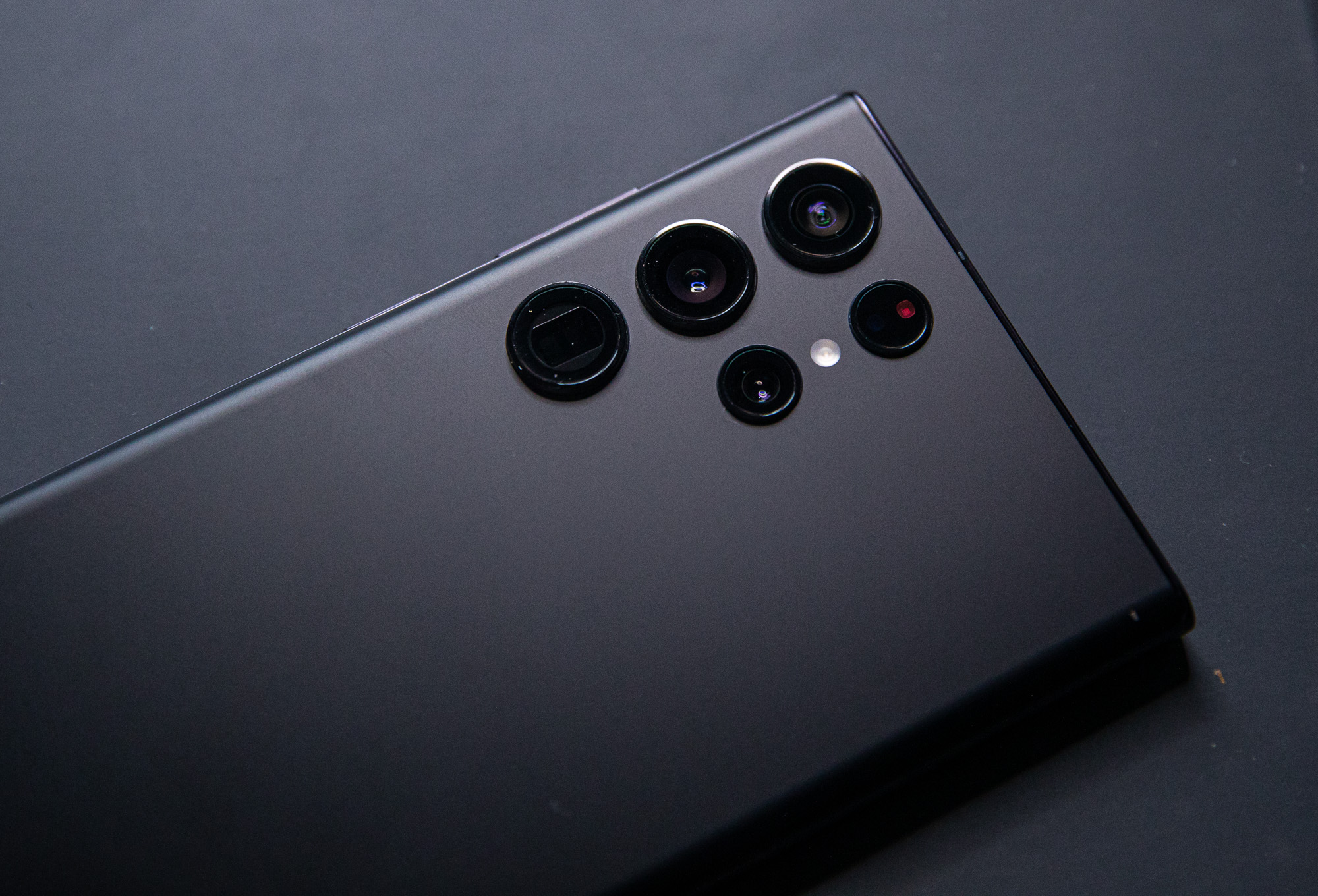 Phone companies can talk about all of the bells and whistles plus new features smartphones have, but the most crucial feature is the camera. Like displays, another feature Samsung consistently delivers on is the cameras on their latest smartphones, and with the S22 Ultra, the win-streak in that department continues.

The S22 Ultra has a fantastic camera system, something the Note line always had. This time it’s house better on the back of the phone because the big box is no longer a thing. The camera systems from both the S22 Ultra and Note 20 Ultra are almost the same. The S22 Ultra sports a 12MP Ultra-Wide Camera, 108MP Wide Camera, plus two 10MP Telephoto Camera with 3x  and 10x optical zoom.

First introduced with the S20 Ultra, “Space Zoom” is still around and, thanks to the upgrades, has gotten better, allowing you to capture some shareable photos of things like the moon. If you use the 30x and 100x Space Zoom, the picture quality takes a hit, but it n now works a lot better than when it was first introduced. 3x and 10x is where it vastly improves. During a test run, photos of geese taken at a distance still look crystal clear, giving most DSLR’s a run for their money. The S22 Ultra’s pro-camera feature is also a fantastic tool for photographers to use that only opens up S22 Ultra’s powerful camera system. Photos look better than ever even though they still look a tad bit oversaturated, but that’s nothing you can’t fix post-process.

Portrait mode is stunning thanks to Samsung’s new depth map technology, which allows the cameras to keep everything down to your hair in focus.

Video recording is sound, but Apple still wins in that department, thanks mainly to its cinematic mode. The S22 Ultra can record in 4K video at 60fps and up to 8K at 24fps delivering a sold experience for users big on shooting video. 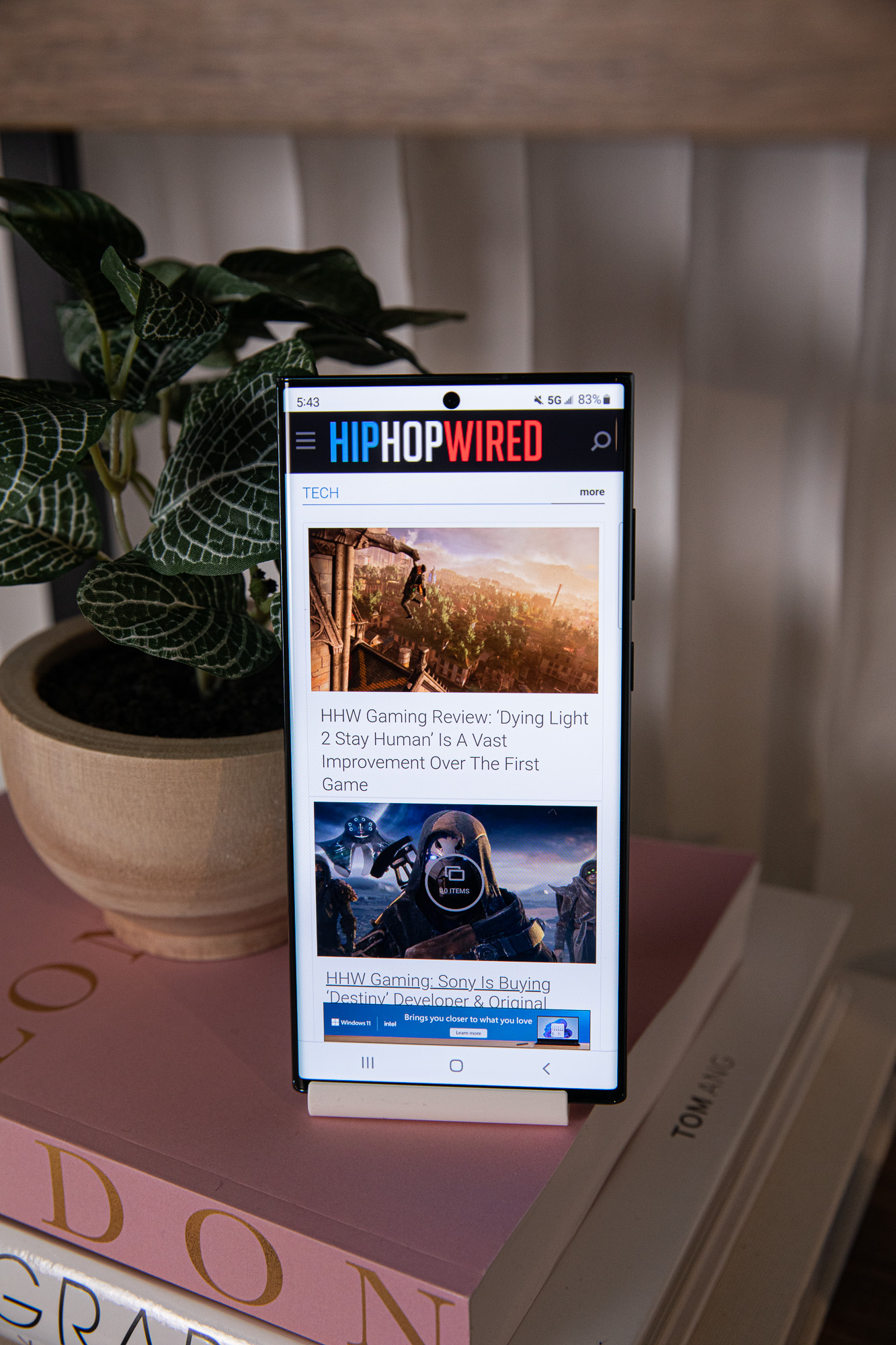 Samsung is a model of consistency when it comes to its flagship smartphones, and that continues to be the case with the S22 Ultra. The smartphone successfully delivers the productivity Note users love and combines it with innovative features that Galaxy phone lovers have come to appreciate. It’s a sexy device with a fantastic camera system that captures moments with incredible detail, whether in a well-lit area or at night. Of course, the price tag might scare people away, starting at $1,199.99, a steep asking price as the world is currently dealing with inflation. But if filling up your gas tank ain’t an issue and you got money to spend, this is an upgrade well worth making.

It’s honestly the dream smartphone that can easily handle work, play, and whatever other daily activities you do on your smartphone like streaming, tweeting, or surfing the web. Pair it with the other Samsung devices around the crib like a television or Galaxy Tab S8 to get a good idea of how good of a productivity beast the S22 Ultra is. So get used to it, folks, the Note itself is D E A D but lives in spirit inside the S22 Ultra, and it’s the best fusion since Goku and Vegeta came together to form Gogeta.