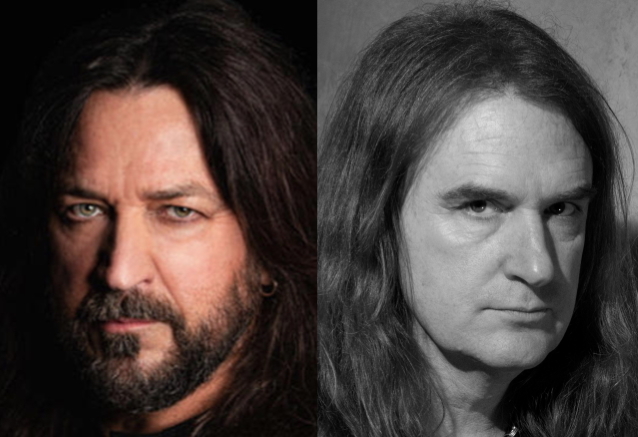 STRYPER frontman Michael Sweet has apparently weighed in on the controversy surrounding MEGADETH bassist David Ellefson‘s intimate involvement in communications with a woman other than his wife.

Over the weekend, sexually tinged messages and explicit video footage involving the 56-year-old Ellefson were leaked on Twitter. The MEGADETH later released a statement on Instagram denying all social media chatter that he “groomed” an underage fan.

Earlier today, Sweet, who is a devout Christian, posted the following statement on his social media: “As a Christian it’s important to remember that we’re ALL sinners. Often we grab the first stone (and the biggest) to throw at anyone who has failed, who has publicly ‘sinned’. The only difference between us and them is we’ve perfected the art of hiding our sins.

“We all sin,” he reiterated. “No one, and I mean no one is blameless. We all sin on a daily basis. Instead of tearing each other down we should be lifting each other up. Praying for one another and praying even more, even harder when a brother or a sister stumbles and falls. What a world this would be if we all magically were able to do this.

Although Sweet didn’t mention Ellefson by name, most of Michael‘s followers on Facebook and Instagram assumed that his comments were addressing the MEGADETH bassist.

In his statement on Monday, Ellefson wrote: “As you may or not know, some private and personal conversations and interactions have surfaced online, released with ill intention by a third party who was not authorized to have them or share them. While certainly embarrassing, I want to address it as openly and honestly as possible.

“As much as it’s not something I’m proud of, these were private, adult interactions that were taken out of context and manipulated to inflict maximum damage to my reputation, my career and family,” he continued. “The other party involved has made a statement which you can see below. I thank her for doing so and hope that this clarifies that the situation was not at all as presented.”

Ellefson‘s statement was accompanied by a screenshot of a social media post from the woman involved, who denied any suggestions that she was underage at the time. The woman also revealed she recorded the intimate moments and shared them with a friend without Ellefson‘s permission, calling herself “naïve” for doing so and claiming that the contact between her and the musician was “all consensual and all online.” She also called assumptions that she was “groomed” by Ellefson “misinformation”.

David, who became a Lutheran pastor nearly a decade ago, and his wife Julie Ellefson have been married for 27 years. They reportedly dated for six years after getting together in 1988. After two days of engagement, they married on April 2, 1994. They have two children, Roman Alexander (25) and Athena Grace (22).

As a Christian it’s important to remember that we’re ALL sinners. Often we grab the first stone (and the biggest) to…