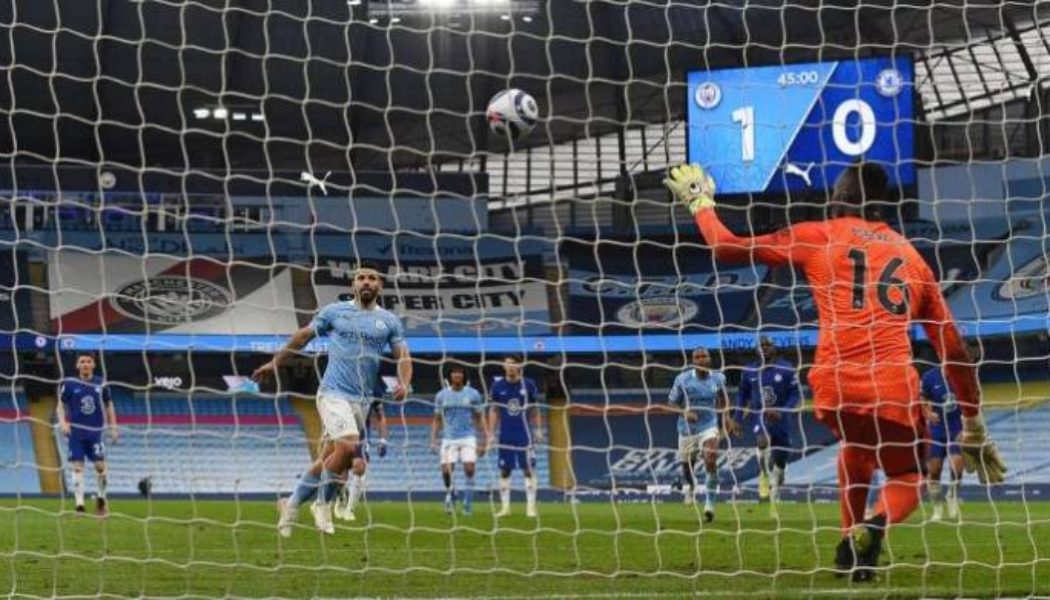 Manchester City forward Sergio Aguero has issued an apology for his penalty miss against Chelsea.

Aguero made a hash of his Panenka effort on Saturday, spooning the kick straight into the arms of Chelsea goalkeeper Edouard Mendy.

It was a surprising slip from the usually unerring Argentine, but it was in keeping with a torrid season for the Premier League leaders from 12 yards out and contributed to a 2-1 defeat that prevented City from claiming the title.

City boss Pep Guardiola refused to criticise the forward following the game, but Aguero has taken to Twitter to issue an apology.

“I would like to apologise to my team-mates, staff and supporters for missing the penalty,” Aguero wrote. “It was a bad decision and I take full responsibility.”

Aguero’s Panenka nightmare was the fourth penalty City have missed in the 2020-21 Premier League season.

As well as Aguero, Kevin De Bruyne, Ilkay Gundogan and Raheem Sterling have all fluffed their lines from the spot, with City surprisingly wasteful when presented with an opportunity from 12 yards out.

No other side has missed more spot-kicks than the leaders this season – and they were similarly poor last season too.

In 2019-20, Guardiola’s charges missed five penalties, with Aguero, Gundogan, Gabriel Jesus and Sterling twice failing to find the net from the spot.

Indeed, City are the first team to miss four or more penalties in consecutive campaigns in Premier League history.

Luckily for City, their struggles from the spot have had little effect on what has been a brilliant season across the board.

Despite the 2-1 defeat to Chelsea on Saturday, Guardiola’s side could still win the Premier League title on Sunday, if Manchester United slip up against Aston Villa.

Indeed, City are already Carabao Cup champions after dispatching Tottenham in the final, and also have a shot at their very first Champions League crown.

Chelsea, who have already beaten them in the FA Cup this season, lie in wait in the final of the European competition in Istanbul on May 29.