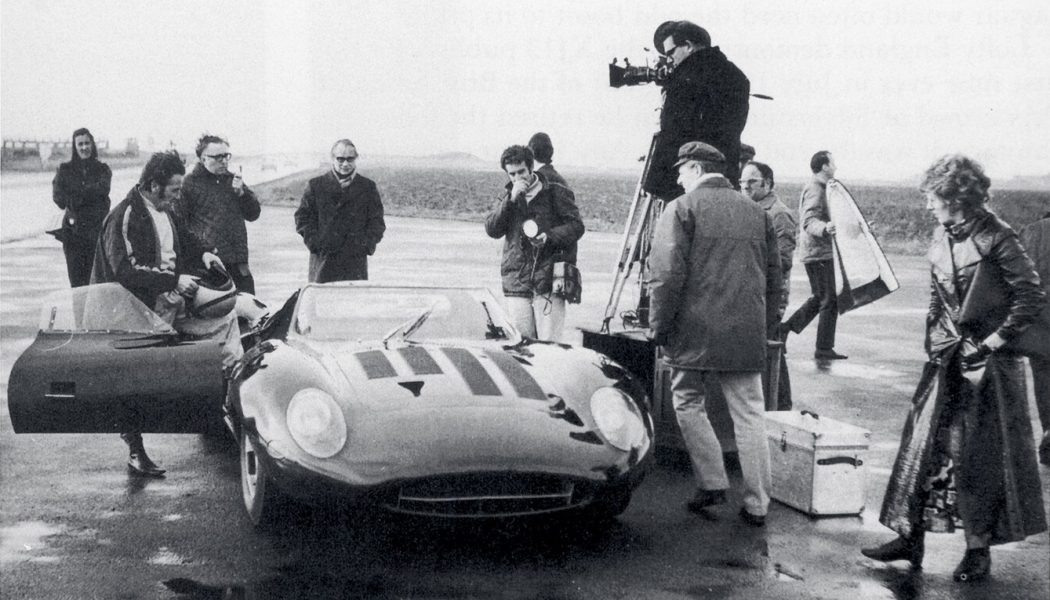 The 1955 Le Mans race is grimly remembered for Mercedes driver Pierre Levegh’s horrific crash on the pit straight, which claimed the lives of more than 80 spectators. But it’s an event that also deeply affected Jaguar: The only son of company founder Sir William Lyons, John, was killed in a car crash en route to the race.

John Lyons was just 25 years old when he died, and it is by no means certain he would have succeeded his father at the helm of Jaguar. But the lack of a successor is often cited as one of the reasons Sir William abruptly decided to merge Jaguar with the British Motor Corporation (BMC)—the company that owned Austin, Morris, MG, Riley, and Wolseley—in 1966. The delicate, six-month-long merger negotiations put the XJ13 program on hold, a fatal delay that meant it missed what would be its only chance to race at Le Mans in 1967.

There were other factors behind the merger: BMC had recently acquired Pressed Steel Fisher, the company that built all of Jaguar’s bodies, and Lyons wanted to ensure supply. And although Jaguar by this time owned Daimler, truckmaker Guy Motors, and engine manufacturer Coventry Climax (which cast the blocks for the XJ13’s quad-cam V-12), Lyons was aware his company may not be big enough to survive on its own.

Lyons had negotiated a high degree of autonomy in the deal, ensuring he remained in control of Jaguar’s factory at Browns Lane and had a seat on the board of the new company, now named British Motor Holdings (BMH). What Lyons had miscalculated, however, was how poorly run BMC had been: many of its cars lost money, its plants were old and inefficient, and its product planning and marketing were chaotic. Within months, BMH was in trouble.

Enter Leyland. A truckmaker headed by an aggressive salesman named Donald Stokes, Leyland had bought Standard-Triumph in 1961. Ironically, Stokes had approached Sir William in 1965, offering a merger deal, but Lyons had backed out at the last minute, fearing Jaguar would be subsumed by the new company. On the rebound, Stokes snapped up Rover in 1967.

With BMH in financial difficulty—and 190,000 jobs at stake—the British government “encouraged” Stokes to pursue a merger of Leyland and BMH in 1968. The new company, British Leyland Motor Corporation (BLMC), was like a British version of General Motors, with a huge brand portfolio and the capacity to build a million cars per year.

Although Stokes made him deputy chairman of BLMC, the worst fears of Lyons were about to come true. He retired as chairman of Jaguar Cars Limited in 1972, and the following year the company was renamed British Leyland Exports Limited. And the old BMC’s structural problems, exacerbated by the increasing militancy of the highly unionized workforce, were simply too great. By 1975, BLMC was broke, and a government report proposed spending more than $3.8 billion of taxpayers’ money (1975 exchange rates) to make it a viable and competitive company by 1981. It was a staggering sum at the time, but the alternative was the potential loss of a million jobs if BLMC failed. Sounds like a familiar story, doesn’t it?

On June 27, 1975, BLMC was placed under 100 percent government control and renamed British Leyland Limited (BL). It was a grim time for Jaguar. At one point, government bureaucrats even proposed Jaguars be branded Leyland, and the storied Browns Lane factory became Large Car Plant No. 6, its iconic leaping cat statues removed and replaced with BL signs. Under Sir William Lyons, Jaguar production had increased from 6,647 in 1950 to 25,963 in 1965. In 1981, it built just 13,360 cars.

It took the organizational brilliance of John Egan—and the somewhat unexpected success of the Series III XJ6 in the United States—to turn Jaguar around and get the company ready for the privatization that Britain’s then prime minister (and Ronald Reagan soulmate) Margaret Thatcher had been demanding since her election in 1979.

Sir William Lyons died on February 8, 1985, but he had lived long enough to see his beloved Jaguar emerge from the heart of darkness to become an independent company once again following its successful IPO on the London Stock Exchange the previous August.

ATTENTION LE MANS FANS! MotorTrend is the EXCLUSIVE SPOT IN THE U.S.  where viewers will be able to see all of the 24 Hours of Le Mans, from qualifying to race end.  Sign up for our special offer of only $2 a month for a year, and you’ll get all of the action, including qualifying on Thursday, Sept. 17, live race coverage beginning at 7:30 a.m. ET (4:30 a.m. PT) on Sept. 19, and the checkered flag after 24 hours of on-track battle. In addition, fans will be able to view special content prior to and during the Le Mans weekend—part of a vast array of more than 3,200 hours of content available on the MotorTrend App.