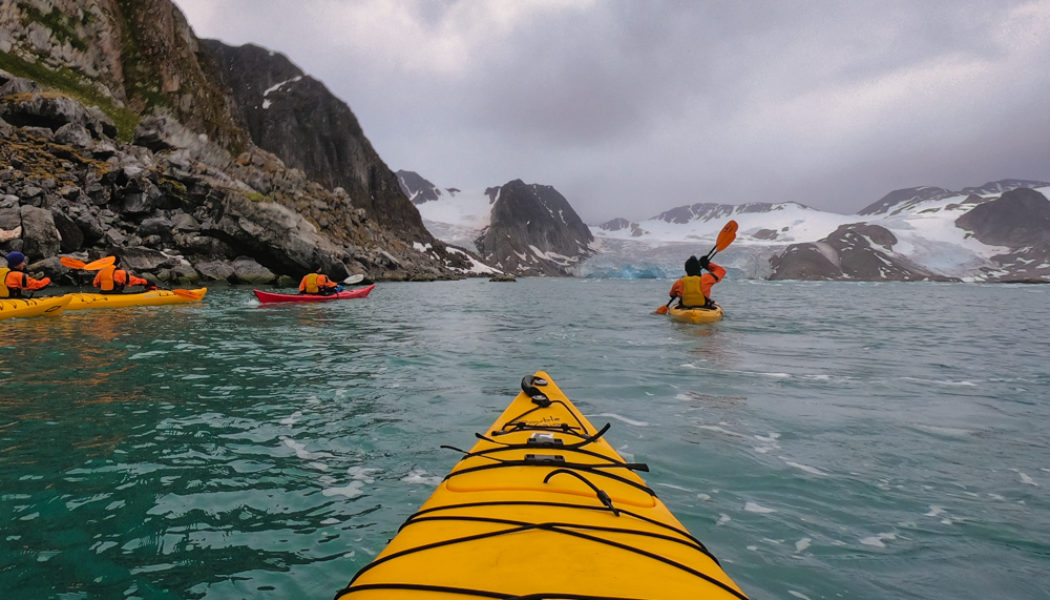 Sometimes, I hear myself talking about my job and think, “God, I sound ridiculous.” It’s usually when I’m rattling on about where I’ve been and have to check myself, remembering that most people aren’t fortunate enough to visit places like the Galápagos or Easter Island – let alone both in a single trip.

Recently, one of these occasions cropped up when I was wriggling into a heavy-duty dry suit in preparation for our kayaking excursion in Svalbard. A fellow passenger asked me if I had done this before and I explained that, unfortunately, I had missed out on a kayaking excursion earlier in the year in Antarctica because of Covid-related restrictions.

“You were in Antarctica this year?” she cut in. “And now, you’re in the Arctic?”

I realised how preposterous it sounds not only to see two polar regions in a calendar year but to be disappointed that I didn’t manage to kayak during one of these once-in-a-lifetime trips.

Visiting Antarctica was a watershed moment for us. It was the only continent we hadn’t visited – our seventh – and a twice-delayed adventure we’d been planning for over two years. In the end, it was everything we had hoped it would be: wild, isolated, beautiful, enormous, and home to some of the most extraordinary animal life we have seen. It became our greatest travel experience – one we will savour for years to come.

However, no matter how churlish it may sound, I did leave Antarctica with one regret: I didn’t get to kayak.

As such, during our first presentation aboard our 8-day expedition to Svalbard, our expedition leader mentioned that if we wanted to kayak, we should sign up with Wan, the ship’s Kayak Master.

We quickly sought out Wan (who, incidentally, had been on our Antarctic voyage) and put our names down. The next evening, we attended the mandatory safety briefing for kayakers, followed by a fitting for our dry suit, splash deck, gloves and booties and then… we waited.

The days slipped past as, first, poor weather put paid to a chance to kayak, then a polar bear sighting meant we had other things on our minds and then the ship headed north, into the pack ice, which was too exposed for kayaking (but ironically great fun for a Polar Plunge).

Finally, on the penultimate day of our voyage, we dropped anchor in Hamiltonbukta (Hamilton Bay), a sheltered inlet in the long and narrow Raudfjorden. Just after lunch, we were sitting in the Viking Lounge when an announcement sounded over the tannoy: “Kayakers, meet in the mudroom at 14.45.”

There were eight of us in the mudroom wriggling into our protective clothing. The rest of the passengers would be spending the afternoon cruising around Hamiltonbukta in Zodiacs, so we had to get ourselves through the mudroom and onto the water before they arrived.

We fumbled nervously as we attached the splash decks to our heavy-duty dry suits and pulled on thick gloves and snug booties. Finally, paddles in hand, we were ready to go.

We motored away from the ship in a Zodiac, deep into the fjord with the kayaks trailing behind. Once we were well clear of the ship, we lined up the kayaks alongside the Zodiac and slipped over the side into the seats of our double kayak. Apart from Wan, we were all two to a kayak, so Kia took the front. Soon, we were all safely secured and on our way.

We headed along the rocky coast towards the huge glacier looming on the horizon. Giant cliffs and snow-capped peaks towered above us while low clouds hung in the sky. It may have been overcast and gloomy but it only added to the sense of adventure.

As we moved forwards, we encountered our first chunks of ice – known as ‘bergy bits’ – floating in the grey-green water like flotsam. We bumped and bounced off the ice. Occasionally, the bow of the kayak rode over a nugget and we (I) quoted the odd line from Titanic.

However, as we pushed on into the bay, the chunks turned to blocks so big they had to be avoided. Eventually, the bergy bits became icebergs the size of cars and we had to give them a wide berth. An iceberg can roll at any time and, as you only see the tip of the iceberg above the water, could crush a kayaker or cause a huge wave that could swamp the kayak. Staying a safe distance from any iceberg allows enough time to turn the kayak into an oncoming wave to safely ride over it. Likewise, calving glaciers can be just as deadly.

As we approached the glacier – one of 2,100 in Svalbard – we noticed that it was audibly calving: electric cracks followed by a rumbling splash travelled across the surface.

In the distance, fellow passengers motored around in the Zodiacs. In contrast, at sea level proper where only the seabirds, seals and whales get to see the landscape, we felt like we were cheating; furnished with a secret advantage. It was a surreal way to explore the scene.

It was here that our guide, Wan, asked us to set down our paddles and close our eyes. Take a moment, he said, to reflect on where you are and just absorb the smells and sounds: the crisp, cool air, the gentle lap of water, the sharp whip-crack of the glacier.

What could have felt twee and awkward was actually simple and beautiful. In an action-packed expedition, these precious moments of stillness helped us appreciate the true magic and magnitude of nature in the Arctic.

There were nine of us low on the water with nothing but a wafer-thin rotomoulded sheet of fibreglass between us and the Arctic Ocean. Just meters from us, icebergs, the remnants of glaciers formed over thousands of years, floated by indifferently. Beyond, sat their source. A body of ice so dense and large, it constantly moves beneath its own weight, calving its way into the sea.

Whether we were there or not, everything would continue in the same manner, moving to its own rhythms, totally apart from human concerns. There is something deeply reassuring in knowing that there are still some places in the world where we remain completely insignificant.

We paddled onwards to the closest point to the glacier that we could safely reach. There, we slid in and out of the packs of mush ice gathered on the surface, took a closer look at some of the icebergs and revelled in the novelty of navigating an ice-strewn fjord in the high Arctic.

Before long, we realised that all but one of the Zodiacs had returned to the ship. It was time for us to go. We reluctantly paddled back to the dinghy, clambered out of the kayaks and slipped back into the Zodiac to head back to the ship.

Kayaking, low in the water, among the icebergs of Hamiltonbukta, epitomised the power of the polar regions; that almost incommunicable sensation of being just a tiny speck in an immense, harshly beautiful landscape. There, I’m doing it again. God, I sound ridiculous.

Kayaking in Svalbard: the essentials

What: Kayaking in Svalbard during our 8-day expedition with Albatros Expeditions.

Where: We stayed in a Panorama Window Suite on the Ocean Atlantic. Albatros Expeditions’ future trips to the Arctic, however, will be aboard the new Ocean Albatros. With a total of 95 staterooms and suites, all with unobstructed sea views, most with their own balcony, the Ocean Albatros will be one of the greenest ships to venture to the Arctic.

The Ocean Albatros has two restaurants, a wellness area, a bar, an open deck dining facility and a modern lecture lounge as well as a unique panorama sauna and 12 dedicated solo cabins without a single-supplement.

How: We visited on an 8-day expedition to Svalbard, the last stop before the North Pole. Prices start at $6,590 USD per person based on two people sharing.

Discounts and promotions can be found close to departure dates. Check Adventure Life and Cruise Norway in the US, or Wildfoot, Swoop or Audley Travel in the UK.

Prices include all Zodiac cruises and landings, the Polar Plunge, rubber boot rentals, guiding and lectures, all meals on board and 24-hour tea and coffee.

The kayaking excursion costs $250 USD per person, is reliant on weather, sea, and ice conditions, and is only available to those who have previous kayaking experience. If you wish to join an outing, sign up early in the voyage and attend the mandatory safety briefing. More information can be found on Albatros Expeditions.

We flew from London to Oslo and joined Albatros Expeditions’ charter flight to Longyearbyen. Book your international flights via Skyscanner for the best prices.

Home › Forums › Kayaking in Svalbard: ice and isolation in the high Arctic