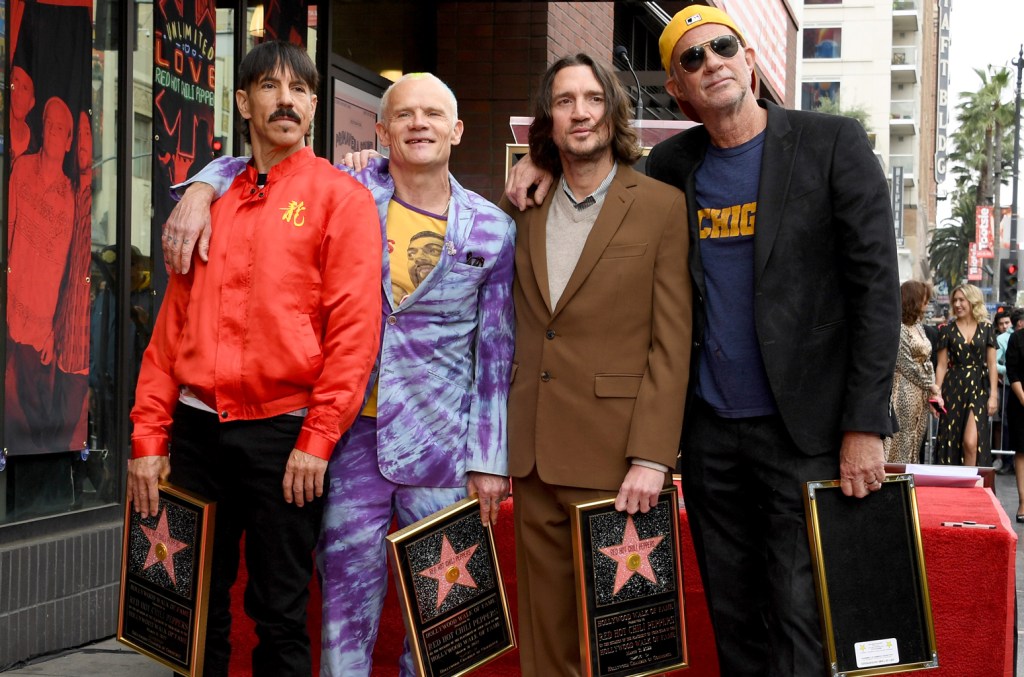 Four and a half months after releasing its last album, Unlimited Love, the Red Hot Chili Peppers begin the campaign for its next title, Return of the Dream Canteen, with a new single and video, “Tippa My Tongue.”

“There’s a lot of different things in there. To me it’s got a bunch of hooks in it,” drummer Chad Smith tells Billboard. “It’s got P-Funk in it. I hear George (Clinton in it), and some Hendrixy kind of licks. It’s a nice gumbo. I thought that would be a good first cone to come out from that (album). It sounds like us, but new. I think that’s cool.”

Smith adds that “a lot of different things” also describes the rest of Return of the Dream Canteen, due out Oct. 14 on Warner Records. The album is culled from the same sessions with producer Rick Rubin that produced Unlimited Love, which debuted at No. 1 on the Billboard 200 in April. It marked the return of guitarist John Frusciante to the lineup for a third tenure after an 11-year absence, and the Chili Peppers’ first album with Rubin since I’m With You in 2011.

“We just want to leave ’em wanting less,” Smith quips, before adding that “it was just the four of us in a room and we just wrote a bunch of music and wrote and wrote with no time constraints and ended up recording all these songs. We always record more than what comes out on a record, but often they get left in the vault or unfinished or whatever. But we finished them all. We just felt like we had too many good songs to not put out another record. It’s not like a B-sides record or anything like that. Everything felt good and right, so, yeah, it’s all good.”

Smith feels that Return of the Dream Canteen “stands alone” from Unlimited Love, although listeners will find sonic similarities “because it was all done at the same time and recorded in the same place. So it has continuity in that way. We kind of thought about it before Unlimited Love came out; we thought, ‘These (songs) go together here and these go together there and, look, we’ve got two things, both great.”

In announcing the forthcoming album, the band stated that it is “easily as meaningful as (Unlimited Love)…Return of the Dream Canteen is everything we are and ever dreamed of being. It’s packed. It’s made with the blood of our hearts.”

Smith is loath to describe it in specifics — “I hate to tell people what to think,” he explains — but concurs that it’s as eclectic as anything the band has released previously.

“It has a little bit of everything,” he says. “It definitely has some different flavors than (Unlimited Love) and vice versa. I think that’s a good thing. I don’t think we’re repeating ourselves. So, typical Chili Peppers. It’s just a mix of everything.”

Smith credits the group’s productivity to concentrated time off the road due to the pandemic, as well as Frusciante’s return to the band. “I thought the John ship had sailed,” the drummer acknowledges. “Eleven years went by and he was kinda doing his own things. So I was surprised; Anthony’s like, ‘What do you think about John coming back in the band.’ Wow! Really?! That wasn’t on my radar.

“But he’s a unique person and an incredible musician, as we all known. To have an opportunity to play with him and write with him again and perform again, it’s something we don’t take lightly and embrace and want to do again. And once we started paling together it just felt natural. For whatever reasons, the four of us, when we work together we do make this thing that’s special and there really is a chemistry, and chemistry’s everything with a band. If I could bottle it, everybody would want some.”

As “Tippa My Tongue” comes out the Chili Peppers are in the midst of the North American leg of its Global Stadium Tour, which wraps Oct. 16 at the Austin City Limits Festival in Austin, Texas. The group tours Australia and New Zealand starting Jan. 21, and is expected to play other territories during 2023 as well.

“When Live Nation approached us and said…we think you guys can do stadiums, we were like, ‘What? Whoa, I don’t know about that,’ but it’s going very well,” Smith says. “People are so happy to be going to concerts again and we’re happy to be playing them again, so it’s this mutual feeling of joy and relief. And I’ll humbly say we’re playing very well and Anthony is singing better than ever and John is really dedicated and into it. There’s a lot of smiling faces now.”