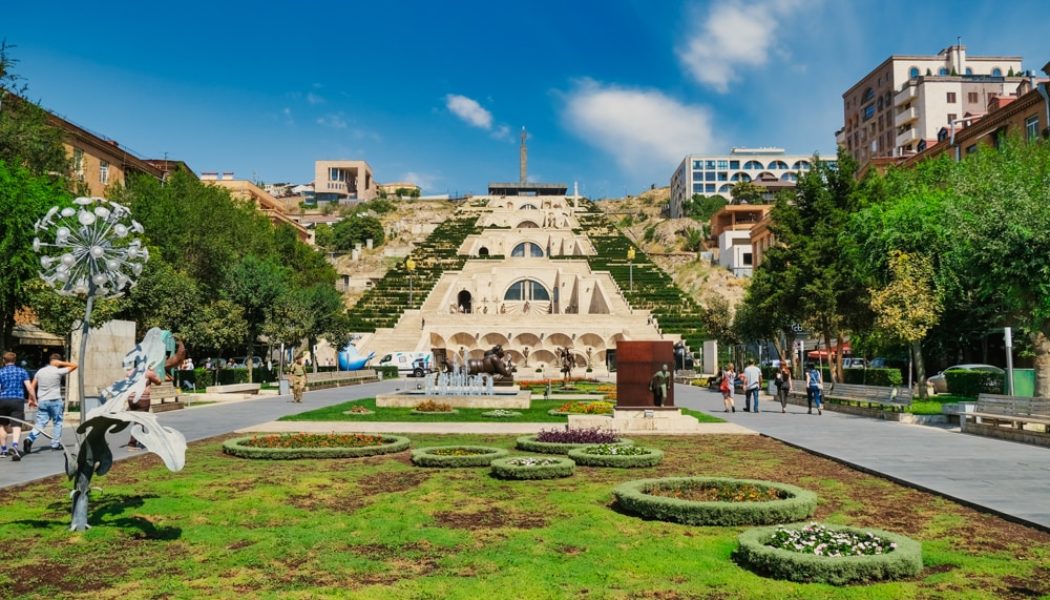 From the world’s oldest winery to medieval monasteries, we share the best day trips from Yerevan, Armenia’s Pink City

After trekking the Highlander Svaneti and exploring Kazbegi in Georgia, I had a few days before my flight home so I hopped across the border to Yerevan, the capital of Armenia.

Known as the Pink City for the volcanic rock used in its state buildings, Yerevan is a city with many faces. With evidence of settlement dating back to the 8th century BC, Yerevan is one of the world’s oldest continually inhabited cities. While most of its ancient structures have now been removed, built over by Soviet-era tower blocks and monuments, the city still retains several alluring features – not least its position in the shadow of the fabled Mount Ararat.

Today, following Armenian independence in 1991, the city is modernising at pace, shaking off its Soviet past as contemporary art galleries, chic wine bars and sophisticated restaurants pop up along its tree-lined boulevards.

I spent a couple of days exploring the city on foot, visiting sites such as the stone steps and Arts Cafesjian Center at the Cascade Complex, Republic Square and the Armenian History Museum, and the haunting Armenian Genocide Memorial. I then used my remaining time to take some day trips from Yerevan. Fortunately, in a country the size of Armenia, it’s possible to squeeze a lot in and visit the major sites as well as a few lessser-known spots from a base in Yerevan.

From the ancient Areni Cave to the medieval monasteries of Geghard and Noravank, these are the best day trips from Yerevan.

Geghardavank (Monastery of the Spear) is named after the spear that allegedly pierced Jesus Christ’s side at his crucifixion. The relic was kept in the monastery for 500 years after supposedly being carried there by the Apostle Thaddeus (Jude) in the 1st century AD.

The UNESCO-listed monastery is carved out of a cliff in the Upper Azat Valley just over an hour’s drive from Yerevan. With some of its structures dating from as early as the 4th century, the monastery was once known as Ayrivank (Monastery in the Cave) due to its rock-cut construction.

I was fortunate to visit on a Sunday when a choir sings following the morning service in the 12th-century Surp Astvatsatsin (Holy Mother of God Church). Here, a tiny ensemble gathered in the cool chamber under a stream of light entering through the rock-cut skylight. It was outrageously atmospheric, bordering on magical. If you have time for one day trip, make it to Geghard.

The striking Garni Temple is a classical Greco-Roman collonaded structure overlooking the Garni Gorge. In fact, the Parthenon-like construction is the only such building still standing in Armenia or indeed any country of the former USSR.

Dating from the 1st century AD, Garni was almost entirely destroyed by an earthquake in 1679 and lay in ruins for centuries until it was painstakingly rebuilt from 1969 to 1975. There are also some Roman-era bathhouses adjacent to the temple.

Below the temple, in the Garni Gorge, is the Symphony of Stones rock formation, known for its distinctive basalt columns. It is easily reached by a dusty track that descends from the temple.

Located on a small hillock at the foot of the 5,137m (16,854ft) Mount Ararat – which is just over the border in Turkey – Khor Virap Monastery cuts a lonely figure on the exposed Ararat Plain. Founded in 642 AD, the complex has been periodically rebuilt and restored over the centuries.

Today, it is one of the most important pilgrimage sites in Armenia. Legend has it that Gregory the Illuminator was imprisoned in Khor Virap (meaning ‘deep dungeon’ in Armenian) for 13 years by the pagan King Tiridates III of Armenia. His crimes? Attempting to convert the locals to Christianity.

These days, pilgrims must descend a winding stairway, followed by a rickety ladder, down into a dark well to access the small chamber where Gregory was held. If you plan on doing the same, make sure you’re wearing appropriate footwear!

Noravank, meaning New Monastery, was founded in 1205 and enjoys a spectacular setting in a narrow gorge banked by arresting brick-red cliffs. The scene is somewhat reminiscent of Jordan’s ancient city of Petra, albeit on a much smaller scale.

As the site is relatively small, visits to Novarank can easily be included on a day tour to Khor Virap and Areni Cave and the nearby wineries. If possible, try to time your visit with sunset when the scenery really comes alive and the light brings a radiant sheen to the rosy-gold stone of the churches.

It’s safe to say that Areni Cave – officially known as the Areni-1 Cave Complex – conceals some serious history within its ancient caverns. In 2008, the world’s oldest leather shoe – known as the Areni-1 Shoe – was discovered in one of its cavities. The well-preserved 5,500-year-old moccasin-style shoe was found stuffed with grass – probably used as an insulator or an early shoe tree.

Then in 2011, at the same site, the world’s earliest-known winery was also unearthed. Among other articles, archaeologists exhumed a wine press for crushing grapes, fermentation and storage vessels, drinking cups and grapevines, skins and seeds dating back at least 6,100 years.

Today, the small network of tunnels and caverns is open to visitors who can wander the eerie chambers and see the ancient wine-making equipment still in place. Located just 10 minutes from Novarank, Areni Cave is often included on tours to the monastery and Khor Virap. Allow an hour to see everything.

At an altitude of 1,900m (6,234ft), Lake Sevan (Sevana Lich) is the largest lake in both Armenia and the Caucasus. It is also one of the world’s largest freshwater high-altitude lakes. Its glistening sapphire waters, sandy beaches and ancient monastery complex make it one of Armenia’s most popular holiday destinations.

The Sevanavank monastery is probably the lake’s most photogenic spot and for good reason. The complex was initially constructed on an island in the lake, but when Soviet irrigation projects caused the water level to drop by 20m in the 1950s, the island was transformed into a peninsula. Additionally, as the water retreated, 2000-year-old villages, fortifications and artefacts were also revealed.

A brief visit to Dilijan can be coupled with a day tour to Lake Sevan, but to really do this national park justice it’s better to dedicate a full day to hiking its forest trails. The verdant landscape and fresh mountain air provide a welcome relief during Armenia’s oppressively hot and dusty summer months.

First protected in 1958 and then established as a national park in 2002, Dilijan is spread across the lush Aregouni Mountains in northeastern Armenia. The landscape is famed for its deciduous forests, wildflower meadows, biodiversity of flora and fauna and therapeutic springs. It’s also home to an extensive network of hiking trails including the 1,500km Transcaucasian Trail linking Armenia with Azerbaijan and Georgia.

Commonly referred to as Etchmiadzin, Vagharshapat is the 4th-largest city in Armenia and the country’s ‘spiritual capital’. Its most famous site is the UNESCO-listed Etchmiadzin Cathedral where the Mother See of Holy Etchmiadzin, the centre of the Armenian Apostolic Church, sits.

It is here where Gregory the Illuminator saw a beam of light during a holy vision and thus built the first Mayr Tachar (Mother Church of Armenia). Despite its cultural and historical significance, the cathedral and connected complex are not as striking as Geghard, Noravank or Khor Virap.

Other than the main cathedral (Mayr Tachar), the complex includes pretty landscaped gardens, the Palace of the Catholicos, a Genocide Monument and the Holy Archangels Church.

The magnificent 7th-century Amberd Fortress is the largest standing fortification in Armenia. Meaning ‘fortress in the clouds’, the stronghold is located at around 2,300m (7,500ft) in a commanding position on a mound overlooking the gentle slopes and farmland of the Ararat Plain.

During the summer, the plain is dotted with green or white tents where shepherds graze their flocks. Never far from view is the spectacular four-peaked Mount Aragats, the highest point of the Lesser Caucasus.

Also nearby is the tiny but peaceful Kari Lich (Kari Lake) where most organised tours stop as well as the Armenian Alphabet Monument.

Armenians are very proud of their alphabet. Developed around 405 AD by Armenian linguist Mesrop Mashtots, the 39-letter alphabet would eventually be widely adopted across the Ottoman Empire. It is thought Mashtots created the alphabet to give the newly founded Christian kingdom its own Bible.

To celebrate 1,600 years of the unique ligatures, the Armenian Alphabet Monument – also known as Alphabet Alley – was erected in 2005 on the site of Mashtots’ final resting place.

The moment isn’t really worth a trip alone so it’s best to combine it with Amberd Fortress and Kari Lich.

What: Exploring the best day trips from Yerevan, Armenia.

Where: In Yerevan, I stayed at the 4-star hotel Nacho Hotel. While perfectly serviceable, the hotel was a bit of a walk from the city centre and main sites and so I felt it was a little overpriced.

More central, mid-range options include the 4-star Republica Hotel and the 3-star Villa Delenda. A well-reviewed 5-star option is the Golden Palace Hotel, while at the other end of the spectrum, Highland Hostel was recommended to me by other travellers.

When: The best time to visit Armenia is in May, June or September. July and August are also good but can get extremely hot and are also the busiest months.

How: I took the overnight sleeper train from Tbilisi in Georgia to Yerevan. During the summer, there are daily trains in both directions. They depart from Tbilisi either at 20.20 or 22.45 depending on the day of the week and arrive in Yerevan either at 07.00 or 09.00 the following morning. In the other direction, trains either depart from Yerevan at 14.05 or 21.30 and arrive in Tbilisi at 00.11 or 07.35. During the winter, there is reduced service in both directions.

There are three classes available. I travelled second class on the way there and first on the return.

You have to buy tickets in advance at either Tbilisi or Yerevan train stations and will need your passport. For the price, I definitely recommend trying to get a first-class ticket so it’s worth buying tickets in as much advance as possible.

I flew to Tbilisi from London via Istanbul with Turkish Airlines. There are also options to fly directly to Yerevan from a number of destinations including Paris, Cologne, Athens, Moscow and several emirates in the UAE. Book flights via Skyscanner for the best prices.