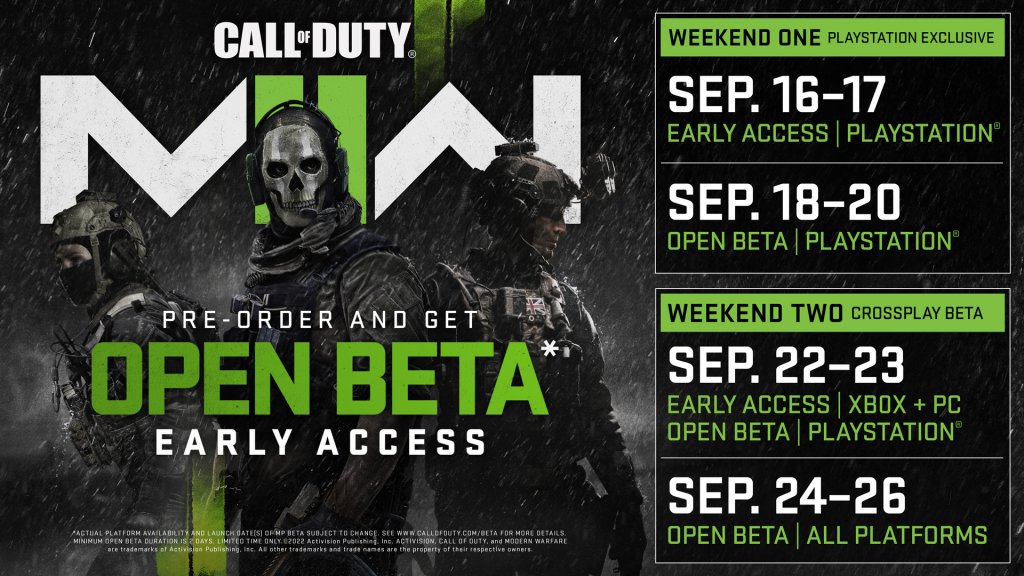 Call of Duty: Modern Warfare II officially hits your gaming systems in October, but players eager to get their hands on the latest shooter from the franchise will have access to the Beta in September. Playstation players will get first dibs followed by Xbox and PC users a week later.

Infinity Ward dropped the intel at the CDL Champs (Call of Duty League Championship) tournament on Sunday (August 7), with more info arriving since. How soon you’ll be able to play depends on your console and if you pre-ordered the highly-anticipated title, though.

The first early access beta starts September 16 – 17 for PlayStation 4 and 5 players who pre-ordered Call of Duty: Modern Warfare II. Then starting on  September 18, the open beta will be available for all PlayStation owners before closing out on September 20. If you’re team XBox and PC, the crossplay for the aforementioned and PS users kicks off September 22 for two days. The crossplay beta for any and everybody will be September 24 – 26. Everything starts 10AM PT/1PM ET.

Call of Duty: Next should provide insight on what’s being touted as a brolic multiplayer experience (a flyover view of the Marina Bey Grand Prix map was shared—no gameplay, though) that players will get to try for themselves the next day. But knowing COD, we won’t be surprised if the Beta kicks off early.

More details over at the COD blog.