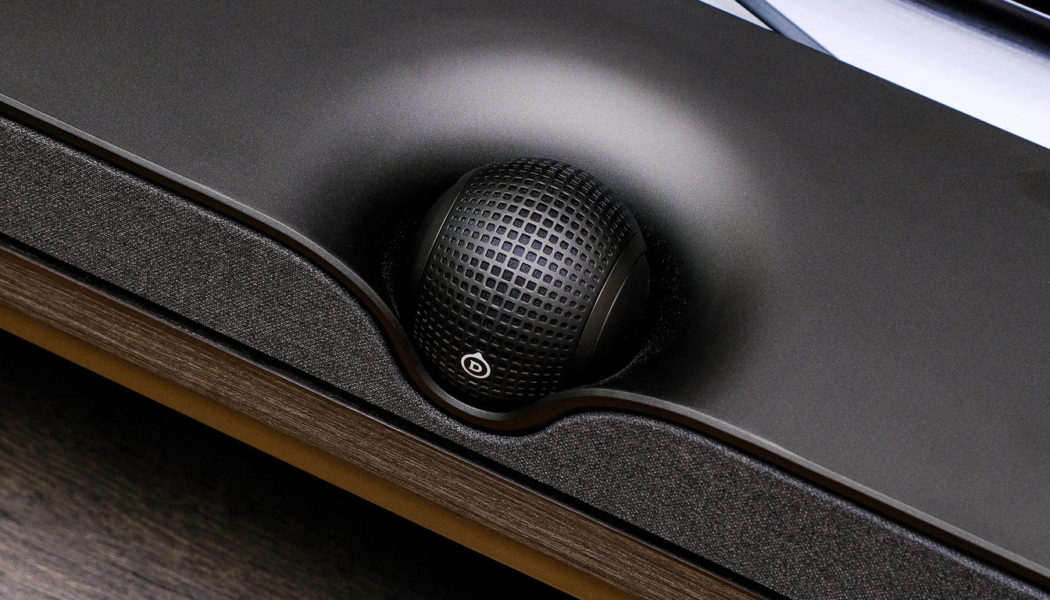 By the magnitude of its $2,400 price alone, the Devialet Dione soundbar comes with sky-high expectations. This ultra-premium Dolby Atmos bar is a solo performer: it doesn’t come with a separate subwoofer, nor does Diavelet even sell such a thing. At 26.5 pounds and measuring nearly four feet wide, it’s a hulking piece of home theater equipment that’s considerably heavier than Sony’s HT-A7000 — let alone something like the Sonos Arc.

The industrial design is unlike anything you’ll find on shelves when browsing more mainstream offerings at your local Best Buy. How many soundbars have an orb molded into the middle? Just this one, I’d wager, and it’s not just there for sci-fi flair: the orb serves as the center audio channel in this 5.1.2 surround sound system that includes a total of 17 drivers. Whether you put the Dione on a TV stand or mount it against the wall, the sphere can be physically turned to face the viewer in either orientation. (The soundbar has gyroscopes to detect how it’s positioned.) 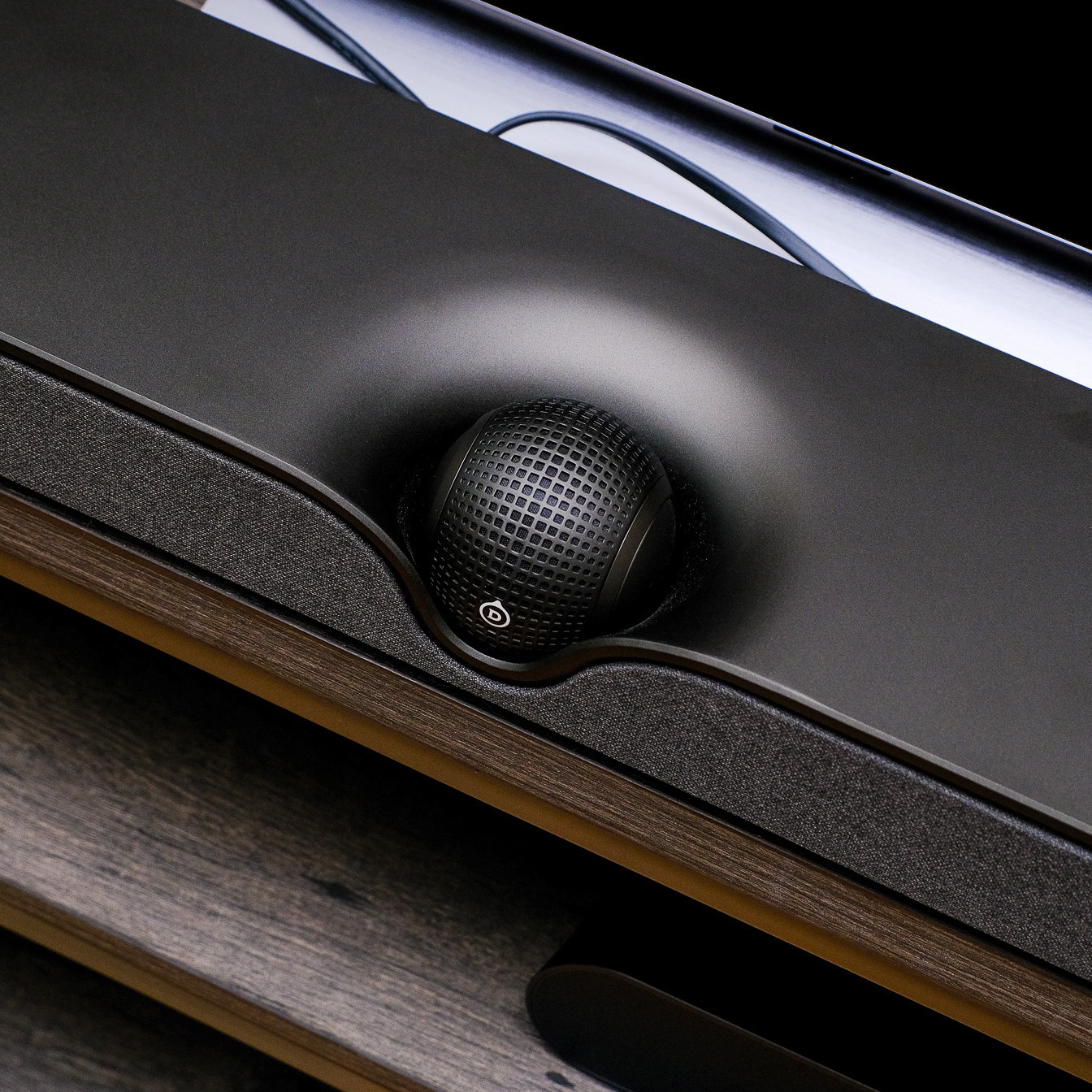 How we rate and review devices

The Dione kicks out up to 950 watts of amplification power, with a claimed frequency response of 24Hz to 21kHz. That low end is impressive — the Sonos Arc only reaches around 47.6Hz — and made possible with the help of eight long-throw bass woofers built into the soundbar. Not only is there no external subwoofer available for the Dione, but you also can’t buy satellite rear surround speakers. “We do not aim to outperform traditional multi-speaker setups but rather to offer a plug and play and wire-free solution with Devialet’s state-of-the-art sound quality,” the company says on its website.

More on sound later, but if you assumed that a $2,400 soundbar would come with a physical remote control, you’d be wrong. Instead, you control the Dione with a smartphone app. Setup is all very Sonos-y: you open the app, get the soundbar on your Wi-Fi network, and then choose which room it’s in. After that, you can run a calibration to optimize the audio signal for your room’s specific size and acoustic characteristics. The Dione has built-in mics for this purpose, so the calibration works across both iOS and Android. It sure would be nice if Sonos had a similar solution for its soundbars instead of relying on customers’ iPhones for TruePlay.

I don’t have any complaints about Devialet’s app, but for this much dough, there should really be a remote included in the box as a secondary option, at least. Why should I need to have my phone close at hand to get the most from a $2,400 soundbar? This is an entirely different price bracket than the one Sonos plays in, so the absence of a remote is felt more. At the top of the soundbar are touch-sensitive buttons for many functions, but that requires walking over to it. At least your TV remote can cover basic volume and mute commands through HDMI-CEC.

Speaking of HDMI, the Dione doesn’t offer any HDMI passthrough — another head-scratcher considering the asking price. So you get just the one eARC port, plus optical and ethernet connections. The soundbar also supports Apple AirPlay 2, Spotify Connect, Bluetooth audio, or UPnP for playing back local network files. (The inclusion of AirPlay also lets you set up multi-room audio with Devialet’s Phantom speakers.)

Though the soundbar lacks custom EQ sliders, it does offer dedicated modes for various types of entertainment. Music mode sticks with simple stereo playback, but movie mode is where all of those drivers shine through with multichannel audio. The soundbar supports Dolby Atmos and other Dolby surround formats — though not DTS:X — and it’ll convert stereo (or mono) content into a surround presentation. There are also spatial audio and voice modes if you feel like upping the immersion or want voices brought even more forward in the mix than normal.

Okay, then, so what does this $2,400 soundbar actually sound like? For movies and TV shows, it’s excellent. But a single soundbar can’t defy physics no matter the price. The lack of proper rear channel surrounds noticeably hurts the Dione’s ability to fully pull you into the scene. Since this soundbar is so wide, you’ll still feel immersion from the front mix and its two up-firing speakers, but the rear effects that normally put the experience over the top just aren’t very perceptible.

Bass, though, is where the Devialet Dione is in a league of its own. I’ve simply been blown away by the low-end capabilities of this single-unit soundbar. When watching The Gray Man on Netflix, the Dione masterfully handled the power and boom of a high-action airplane sequence. In practically everything I sampled, the low-end growl blanketed the room in ways that seemed impossible with no standalone sub on the floor. Even at loud volumes, there’s no distortion or signs of the soundbar pushing itself overly hard.

Frankly, at times, the bass is too much and overwhelms other frequencies. This is really where a manual EQ would help out. (There’s a “night mode” to slice off some of the bass but no way to adjust it outside of that.) Most of the time, voices and dialogue came through clearly, so I never felt the need to engage the soundbar’s voice mode. When it comes to low-end punch and presence, I don’t think you’ll find an equivalent to this from any all-in-one soundbar. But just add a subwoofer to cheaper, competing soundbars, and they’re immediately in the same ballpark.

I wasn’t as dazzled or captivated by the Dione’s music reproduction. Maybe I’m just too used to hearing records (or Sonos tracks) on carefully spaced shelf speakers because, even at $2,400, I still noticed some of those tonal traits and imperfections that are always present when listening to tunes on a soundbar. The output isn’t as full-bodied or enveloping as I’d want, and there’s less overall warmth compared to regular speakers. It’s not bad by any stretch: the Dione unsurprisingly makes a better music speaker than most low-end soundbars, but it wasn’t head and shoulders above my much cheaper Sonos Arc. It’s a cinematic powerhouse but not quite the same showcase for music.

This isn’t a mass-market soundbar. It’s not for anyone who plans to add onto or gradually upgrade their home theater audio system as a long-term passion project. The Dione is a luxury buy for people flush with cash who want minimal clutter and something that sounds wonderful all by its lonesome. They’ll likely pair it with a giant OLED or Mini LED TV, run the room calibration, and then never worry about tinkering with settings again. In that respect, Devialet doesn’t face much direct competition outside of Sennheiser’s Ambeo, which might be replaced in the not-too-distant future.

But even if I was floored by the Dione’s bass response, it’s prohibitively expensive for many consumers, and they’d be better off with more affordable (but still high-performing) soundbars from Sonos, Samsung, Vizio, and other brands. The biggest reason is that those multi-component systems can deliver the full-on, enthralling surround sound experience that Devialet doesn’t quite nail. No single soundbar could, to be fair. But I also never thought that any all-in-one soundbar would be able to produce bass like this. It’s nice when assumptions go out the window. Add some satellite speakers and user-adjustable EQ to this formula, and the Dione 2 could be something very special — and more worthy of its luxury price tag.

Photography by Chris Welch / The Verge