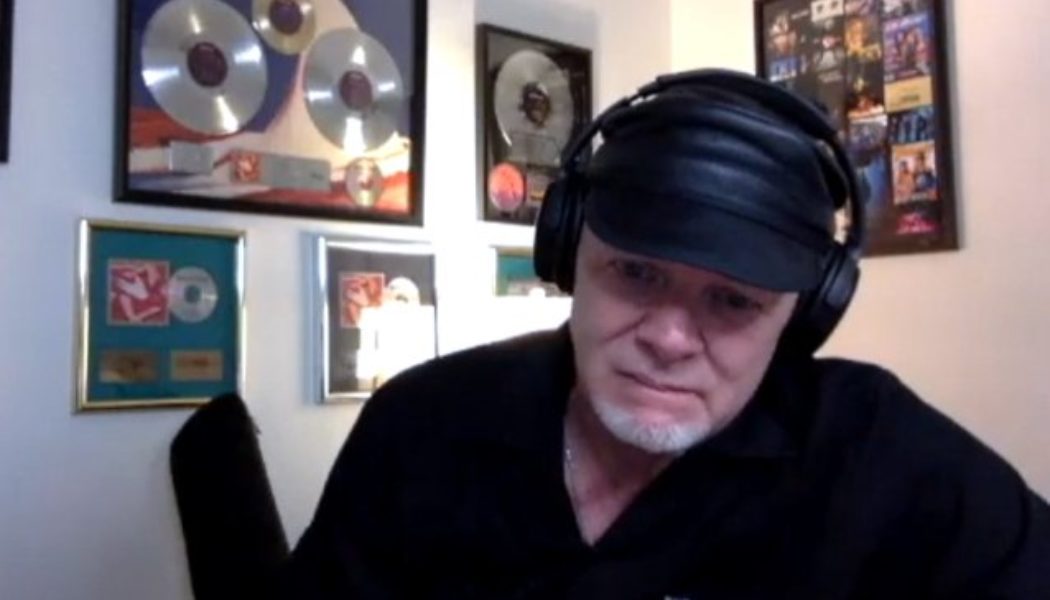 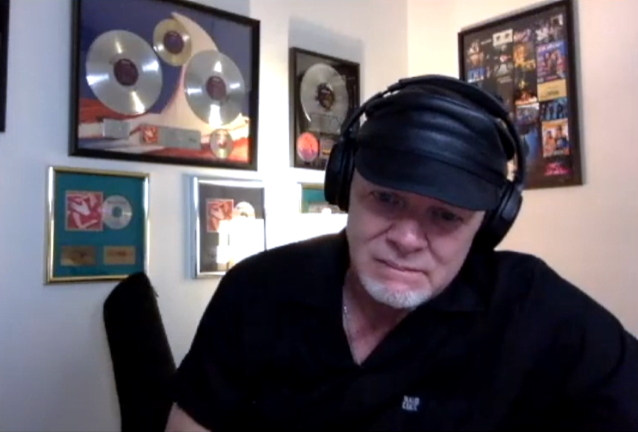 GREAT WHITE guitarist Mark Kendall has confirmed that singer Terry Ilous was fired from the band via e-mail.

The Ilous-led GREAT WHITE released two albums, 2012’s “Elation” and 2017’s “Full Circle”, before Terry was shown the door in July 2018 and replaced with Mitch Malloy.

Kendall discussed Ilous‘s exit from GREAT WHITE in a new interview with with Shawn Ratches of Laughingmonkeymusic. Asked if it’s true that Terry was told via e-mail that he was out of the band, Mark said: “Well, it was kind of that way. But I saw him [later on] at NAMM show and he was all good with it.

“The whole thing for me was his [solo] band was just kind of waiting around for him; they weren’t doing anything. And I felt like he glued in to that band perfect — their style. It just seemed like his voice fit with the ‘Inside Out’ stuff [from XYZ]; it just glued in to that music.

“Our fans kind of looked confused a little bit when they’d watch our shows, but then he’d sing really good and they’d go, ‘Oh, okay. This guy’s cool.’

“I just don’t really have a lot to say that’s bad about Terry. He’s a very nice guy.”

Kendall went on to say that Ilous initially found out online that he no longer had a job with GREAT WHITE. “It got released on the Internet before we could tell him,” Mark said. “It wasn’t our publicist’s fault. She released this information. So we hadn’t told him yet, and she didn’t know that. So he heard the information, and he’s going, ‘This is a hell of a way to tell [somebody he is out of the band].’ And we were just [made out to look like] the bad guys all the way around. And so what do we do now? Go, ‘Meet us somewhere, and we’ll talk about it.’ It was, like, ‘He already knows.’ So that was a tough situation. We’re not bad people. We don’t wanna hurt anyone.”

Mark also defended GREAT WHITE‘s decision to part ways with Terry and hire Mitch, saying: “We had to look out for our music and make sure it’s delivered the best it can be. We felt like with Mitch we could do it a little bit better. It’s not that Terry is not awesome; nothing against him.”

This past April, Ilous told Waste Some Time With Jason Green that he always made it a point to tell people that his primary focus was GREAT WHITE and not his solo career. “I was doing a lot of interviews, and I always said one thing, I said, ‘I am the lead singer of GREAT WHITE. My priority is GREAT WHITE,'” he said. “I always made sure to say that, ’cause sometimes people can misinterpret what you wanna say. So I said, ‘No. I am the lead singer of the band GREAT WHITE. My priority is GREAT WHITE. I’ll be touring with GREAT WHITE. And if the band is not touring, then I will be doing that on my own. And that’s it.’ And that is the truth. But apparently someone got upset. I was touring, and eventually one day, I received an e-mail saying, ‘Thank for for a great service. You’re a great singer. Have a good life.’ And that was it.”

Terry said that he “had no idea at all” that he was going to be replaced. “Last time [I played with GREAT WHITE], we did a string of sold-out shows,” he recalled. “In fact, one of the last shows we did was actually on a Thursday in Wisconsin. We did a summer fest, and there were 10 thousand people [there]. The crowd went crazy — 10 thousand people going nuts. And that day I sang so well. You know, sometimes you sing better than other days — that’s the way it is as a singer — but that day I was really good. Not to be pretentious, but I was happy. I was, like, ‘Ah, man. Great performance.’ Friday and Saturday, we did two other shows — one in Las Vegas. We did a show with SLAUGHTER, and everybody gave me a big hug. ‘Hey, brother, see you next week.’ That’s the last time I talked to anyone in the band. On Monday morning, I get an e-mail… The leader of the band, Mark, sent me the e-mail, but it [was] on behalf of everybody in the band. ‘We think that you should be replaced by somebody else. And we wish you the best.’ The e-mail was polite. ‘Good luck to you. You will have no problem finding another band. Please don’t say bad things about us. We will never say bad things about you.’ And that was it.”

Regarding his initial reaction to the e-mail, Ilous said: “I was surprised — I was a little surprised — because I said, wait a minute, I did three albums. I helped rebuild the brand. I gave my best for nine years. When I joined the band, I was not getting paid very well, and I said, ‘I’m gonna do it anyway, because I wanna prove to myself, and I wanna prove to those guys I can do it.’ So I did what I could do. I would have loved to get a phone call, at least, or maybe a meeting with the band, and said, ‘Hey, it’s not working out. Can you work on this? And maybe we’ll give you another chance.’ ‘Okay.’ I think it’s fair — when you’re a dedicated worker, and you do all that stuff, I think it’s fair. You need a second chance. But second chance for what? I didn’t do anything wrong. It’s not like I had sex with any one of their wives. I’m not that type of person.”

Terry went on to say that there were some personal differences within GREAT WHITE, but not enough to create a major issue when he and his then-bandmates were living in close proximity to one another on the road.

“For me, I was always in GREAT WHITE,” he said. “I would say to myself, ‘GREAT WHITE is GREAT WHITE. I love the band. I love the music, and I’m happy to be in the band.’ I didn’t expect anything. I knew I had an issue with one guy in the band, like a lot of people have issues with the same guy in that band. But I knew that. And I didn’t think the guys would decide to say, ‘Screw Terry, and let’s get somebody else.’ I didn’t expect that at all. I was completely taken by surprise, to say the least. I was beside myself. But I didn’t post anything negative. I didn’t make stupid comments online; I didn’t do anything like it. I said, ‘Well, it is what it is. They have somebody else. I don’t wish him anything bad,’ which I would never do anyway.”

Ironically, the first time Malloy performed with GREAT WHITE was on the Monsters Of Rock cruise in 2018, just a few short months before Terry was fired from the band. At Terry‘s invitation, Mitch got up on stage and joined GREAT WHITE for a rendition of their cover of Ian Hunter‘s “Once Bitten, Twice Shy”.

“I’m the one who introduced Mitch to the band,” Ilous recalled. “And I will never forget that day. I introduced Mitch to the band, and Mitch tried to upstage me on stage. I’m a stage performer, but I don’t need to overdo things. It’s like sex. Music is sex — the same thing. You don’t need to try all different positions to please your partner. You do what you do, and that’s it. But I realized that Mitch was trying to go crazy on stage, one side to the other, to prove that he was a great performer. And I have nothing against Mitch, by the way; I wish him the very best. But I said, ‘Okay. Good for him.’ I didn’t expect that… It’s okay. They did what they had to do. And honestly, to this day, I don’t wish them anything bad at all. Even Mitch — I’m happy he’s got the gig. It’s not his fault. He just got hired.”

Ilous relocated to Hollywood, California from Lyon, France in 1986, forming the metal band XYZ along with friend and bassist Pat Fontaine. Ilous quickly became a favorite on Sunset Strip scene in the late ’80s before getting signed to Enigma/Capitol. After selling over 1.5 million records worldwide and touring with artists such as FOREIGNER and ALICE COOPER, Ilous continued to release albums well into the 2000s, along with film, songwriting and television work.

In 2009, Terry was contacted to play a handful of dates with GREAT WHITE, and within a couple of years, the lineup was made official. GREAT WHITE immediately headed out on an extensive year-long tour, followed by a new album, “Elation”, in 2012 that was highly praised by the media and fans alike. “Full Circle” arrived five years later.