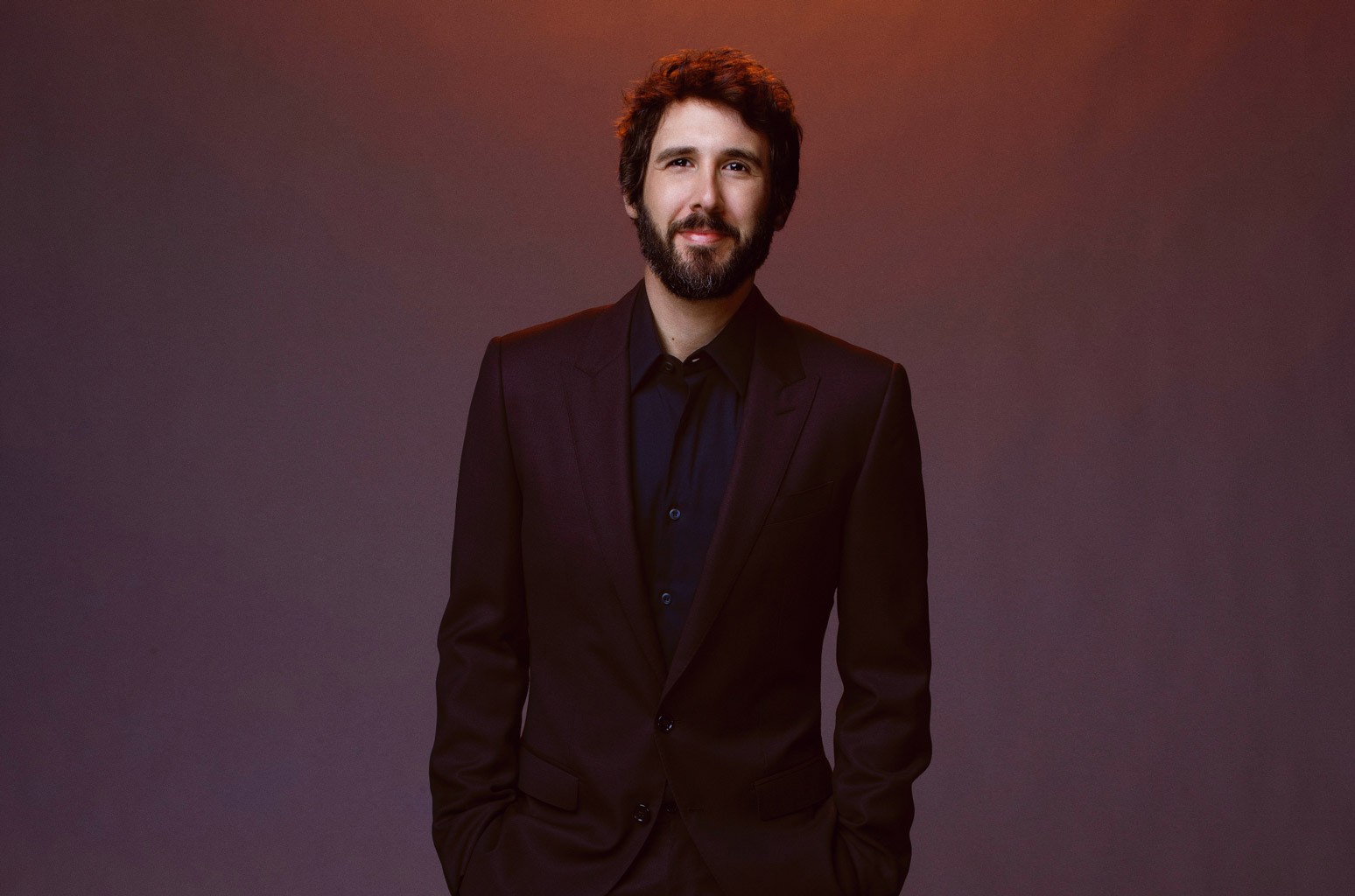 “I’m watching strings play at AIR Studios in London, while my producer’s in Nashville, I’m in Los Angeles,” he tells the Billboard Pop Shop Podcast (listen to his interview, below). “We’ve got band members in different cities around the world. And it became a really powerful thing to watch everybody doing what they could from where they were… it’s one of the reasons why we thought ‘Harmony’ was a good word for (the album), because it wasn’t just the music of it, it was just that everything had to come together.”

The 12-song Harmony album was released on Nov. 20 and features 10 covers of classic tunes that range from vintage songs from the 1960s like “The Impossible Dream” and “It’s Now or Never” to more relatively recent selections like Robbie Williams’ 1997 single “Angels.” Harmony also boasts guests in Sara Bareilles, Kirk Franklin and Leslie Odom, Jr., and is bookended by two newly penned recordings, written by Groban this year: “Your Face” and “The Fullest.”

In support of the album, Groban will take the stage for a pair of livestream concert events on Nov. 26 and Dec. 19. The former will be focused on songs from Harmony and beyond, while the latter will be his first-ever Christmas show.

Below are some highlights from Groban’s interview on the Pop Shop Podcast, including how watching the news “on mute” led to him writing “Your Face,” how a glass of wine (or two) with Glen Hansard-inspired “The Fullest,” what to expect from his upcoming livestream shows, and what holiday music he plays around the house during the season.

On how he found new meaning in “The Impossible Dream” as things changed around him this year:

The songs that I had recorded [he recorded four before lockdown in March], that were just on the surface beautiful great songs — all of a sudden I’m finding new meaning in the lyrics that were relevant to what was happening. A song like ‘Impossible Dream,’ for instance, is a song … people had been asking me to sing that song for a very long time. There’s a lot of great big beautiful versions of it. It’s kind of one of the big baritone songs. And I always knew it to be a beautiful and inspirational song. And then when I looked at the lyric and I’m seeing about how, you know, ‘brave’ it is to ‘dare’ go where there’s a little bit of hope when you’re feeling caged in and feeling like the world is unfair and our government is unfair. You know, it’s the story of Don Quixote in that song, and having to go to a place in your mind that is very opposite from what the world has boxed around you. All of a sudden I wanted to go and re-sing it, because it just felt different. It felt like there was a different layer to it. A lot of songs, as we continued to choose [them], after I finally had a chance to think about making this album again — came about that way.

On the new song, “Your Face” and how it came together:

I wrote ‘Your Face’ entirely and … [it] happened very very quickly. … I was just watching the news. It was on mute and I was tired of listening to the pundits and the arguing and the opinions … and just kind of, I was looking at the faces of nurses and doctors and students and people being interviewed and there’s hope and there’s fear and there’s humanity, and through all of the chaos and confusion, I just wanted to write a song based on the idea that in the end, you know, we have what it takes, if we take stock in the simple things that will get us through it and make us feel more alive and more human through this time. And just wanted to write a song of hope. Not expecting anybody to hear it. I just wrote it as therapy, essentially.

(Groban sent off the basic Garage Band track of his recording of ‘Your Face’ to producer Tommee Profitt, who has worked with NF, among others.)

And that afternoon, with all his samples and all his stuff, he said, ‘well, I did a thing, what do you think?’ And he took my vocal that I recorded in my bedroom, which is the vocal on the album, and he said, ‘I took a pass (at producing the track).’  And that’s it. That’s what on the album. So, that happened very very fast. And sometimes you just have to let it go if it feels right. And it did. Every time we tried to up it, or re-sing it, it wasn’t the same.

On how a glass of wine with Glen Hansard led to the album’s other newly written song, “The Fullest”

‘Yeah, I love that Glen, that’s a great start of a song.’ We, you know, kept sending ideas back and forth of different melodies that could possibly go on that line, and we just, in the end, we just round up having a laugh and having a few drinks, and never found that thing that would finish the song.

How Kirk Franklin brought “The Fullest” across the finish line:

And so the first thing I did after ‘Your Face,’ was I sat down and I said, ‘I’ve gotta come up with something for ‘follow me out on the thin branches.’ Because I feel right now we’re all on those thin branches. And so I wrote basically everything but the bridge. Then I was connected to Kirk Franklin, who I’ve loved his music forever. Whatever religion you are, it’s impossible not to feel amazing when you listen to Kirk’s spirituality in his music and what he infuses. And so I thought, this is a song that is about making sure you’ve lived your life to the fullest, and that … on that day you look back and realize you did things the right way and you treated people well, and you treated yourself well.

So I sent it to him and he’s going ‘I got an idea for the bridge.’ And then he sent the bridge, and recorded the choir in Texas, and worked with an amazing producer named Fede — another person I had not worked with before, whose worked with Coldplay and all these other people.

On what to expect from his upcoming livestream concerts on Nov. 26 and Dec. 19:

The Thanksgiving show will be songs from Harmony and beyond. And we’ve already got a different space for that. It’s going to be more expansive and beautiful. And then we’ve got some plans for my first ever Christmas show. I’ve never done a full Christmas show, surprisingly. But we felt this was a good time to do it. I know for myself and a lot of other people, being with families is going to be virtual, so we felt like what better time than to do a virtual holiday show, with songs that have meant so much to me. And we’re almost on the verge of getting a spot [venue] for that show that would just be absolutely mind-blowingly awesome. But … the ink’s not dry yet, so hopefully that’ll happen.

Speaking of Christmas… Groban’s 2007 holiday album Noel — which spent five weeks atop the Billboard 200 chart — is a seasonal favorite, what does holiday music does Groban play around the house during the season?

You know, I still have some of the old cassettes that I used to listen to when I was a kid. My parents kept them and they sit on a dusty shelf and they get pulled out every year. Ray Conniff Singers… Gladys Knight & The Pips had a great Christmas album. You know, Mel Tormé of course. … Johnny Mathis, of course, has a classic one. The Brian Setzer Orchestra’s got a great Christmas album. So yeah, we keep it pretty old school.

His thoughts on making a modern Christmas album and how “lucky” he was to make Noel:

I think, you know, Christmas music is about that nostalgia, first and foremost. I think for any of us that make a modern Christmas album, I think our ultimate goal is to make an album that is going to collect that dust on the shelf until that time of year that everybody pulls it out. And re-listening to it brings them back to a time of innocence and safety and feeling together. And I feel lucky that I was able to make one of those hopefully for future generations.

Also in the new episode of the Pop Shop Podcast, hosts Katie and Keith discuss the just announced Grammy Award nominations and review chart news about AC/DC, Billie Eilish and The Weeknd.

The Billboard Pop Shop Podcast is your one-stop shop for all things pop on Billboard‘s weekly charts. You can always count on a lively discussion about the latest pop news, fun chart stats and stories, new music, and guest interviews with music stars and folks from the world of pop. Casual pop fans and chart junkies can hear Billboard‘s deputy editor, digital, Katie Atkinson and senior director of charts Keith Caulfield every week on the podcast, which can be streamed on Billboard.com or downloaded in Apple Podcasts or your favorite podcast provider. (Click here to listen to the previous edition of the show on Billboard.com.)