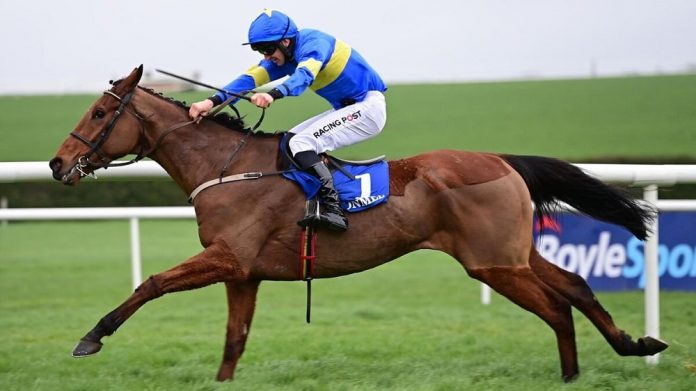 At Punchestown’s two-day January meeting, the feature race over the smaller obstacles in the 2m Grade 2 Moscow Flyer Novice Hurdle. This contest has been won by some famous equine names including Kicking King, Vautour, Douvan and Min. See who SportsLens experts like for this year’s renewal on Sunday, 16 January (12:15) with their Moscow Flyer Novice Hurdle tips below.

Seven of the last 11 favourites have won this race, so horse racing betting sites often get the market spot on. The Moscow Flyer normally attracts a small field with seven entered in it. While ratings can’t tell us much, all recent winners came here off the back of at least one prior run. Horses must be fit to score at this level.

Each of the last four winners were six-year-olds. Before that, however, the previous four victors were five-year-olds. Just one runner this year fits into the latter category. It won’t surprise regular horse racing punters to learn that the stables to focus on are Willie Mullins and Gordon Elliott. Let’s see those Moscow Flyer Novice Hurdle tips from our experts…

Mullins has seven previous wins in the race and all of those since 2009. He runs two in this renewal with the market siding with Dysart Dynamo. Unbeaten in three starts, this six-year-old Westerner gelding landed an extended Clonmel bumper on debut in March. Dysart Dynamo then followed-up in the colts and geldings only Irish National Hunt Flat race during the Punchestown Festival.

As the second, fourth, seventh and ninth have all won a race since, the form looks good. Dyasrt Dynamo made easy work of his hurdles bow at Cork on reappearance last month when he jumped well and made all. What he beat the last day is open to question, but he created a great visual impression.

Dysart Dynamo was value for plenty more than the 19-length winning margin. He now has Paul Townend in the saddle too. Mullins has used the Moscow Flyer Novice Hurdle to unleash some of his best horses in recent times. The Closutton maestro may have another on his hands. However, that is reflected in best odds of 10/11 with William Hill for Dysart Dynamo to follow-up here.

Back Dysart Dynamo with William Hill

Leading Irish owner JP McManus has had the winner of this twice since 2017. The other Mullins mount in the race, Hawai Game, runs in his famous green and gold hooped silks. The five-year-old French import won his sole bumper start across the Channel in some style. Huflower, twice a winner in that sphere, was way behind Hawai Game in fourth that day.

He made all on his Irish and hurdles debut at Naas last month when still showing signs of greenness. Hawai Game, a gelding by Diamond Boy, looks sure to come on plenty or his first start since joining the Mullins yard. Like his stable companion, he comes into the Moscow Flyer Novice Hurdle unbeaten too.

Again, what Hawai Game has beaten over obstacles leaves a lot to be desired. In a similar vein to Dysart Dynamo, his price is about potential. If anything, Hawai Game may be open to even more progress than the favourite as he has raced less and is a year younger. Hills are 3/1 about him following-up on an easy success despite inexperience.

Guily Billy will find this tougher

Henry De Bromhead and owners Cheveley Park Stud team up with Guily Billy, a wide-margin winner at Tramore last time out. This six-year-old grey won his second Irish Point at Tinahely, and has seen the second and third score over hurdles since. After joining current connections, however, Guily Billy got turned over at 1/3 on his bow in this sphere.

Only a mare receiving a 7lb sex allowance proved a couple of length too good for him. Guily Billy, a son of Coastal Path, made amends around the tight turns of Tramore last time out. He bolted up by 25 lengths, clearly showing he had come on and learned plenty from his hurdles debut. The field was well strung out in-behind too.

Guily Billy was visually impressive like the other Moscow Flyer Novice Hurdle market principals but again the substance of the form is open to question. Stepping up in grade from maiden company demands more from all of these horses. Guily Billy ranges in price with online bookmakers from 11/4 up to 9/2 as a result.

Although more exposed than the first three in the betting, Gringo D’Aubrelle represents Elliott’s Cullentra House team. The stable has two wins in this in the last three seasons. Gringo D’Aubrelle, a six-year-old Saddler Maker gelding, drops in grade and trip for the Moscow Flyer after a gallant third at the highest level last time out.

Elliott sent him over to the UK for the Challow Hurdle at Newbury, where he shaped as though a non-stayer at 2m 4f. That was surprising, given Gringo D’Aubrelle comes from a Point and bumper background. His second in a Galway maiden hurdle behind Blazing Khal has been advertised in spades by the winner.

That one has since landed two Grade 2 novice hurdles in the UK and is now favourite in the Cheltenham betting for the Albert Bartlett at the Festival. Gringo D’Aubrelle then bolted up in a Navan bumper and stayed on strongly for a Fairyhouse maiden hurdle success before his Newbury outing. He could well be the each way play among Moscow Flyer Novice Hurdle tips at 8/1.

Back Gringo D’Aubrelle each way with William Hill