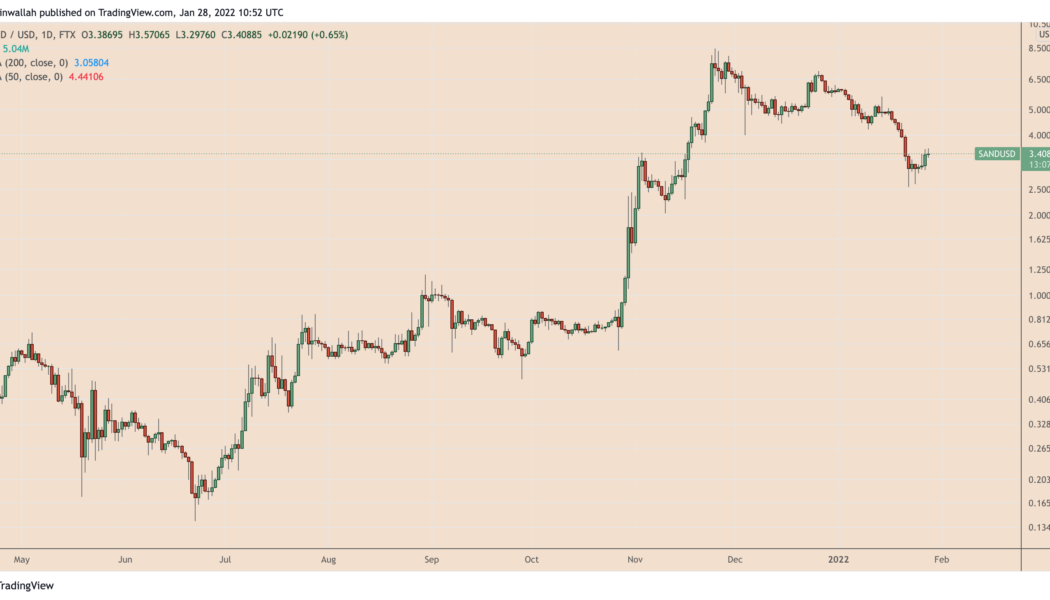 Sandbox (SAND) refused to go down despite broader negative market sentiment in the past 24 hours. Instead, the altcoin logged a breakaway recovery as traders assessed its recent high-profile partnerships as a sign that the project has strong fundamentals.

Traders decided to increase their exposure to SAND after the Sandbox announced partnerships with American rapper Snoop Dogg and Warner Music, a major record label.

On Jan. 27, Snoop Dogg tweeted a teaser of what appeared to be his upcoming nonfungible token (NFT) collection, dubbed “the Snoop Avatars.” The rapper further hinted that his avatars would come as a part of the Sandbox metaverse.

Later, that day, the Sandbox announced that it would create a music theme park and concert venue within its metaverse with the help of Warner Music. In doing so, the gaming project noted that the Warner Music artists would virtually engage with their fans and generate real revenues streams.

“We’re shaping The Sandbox as a fun entertainment destination where creators, fans and players can enjoy first-of-a-kind immersive experiences and be more closely connected to their favorite musical artists through NFTs,” Sebastien Borget, chief operations officer and co-founder of The Sandbox, told Cointelegraph.

Naturally, the high-profile partnerships boosted the prospects for SAND to find more takers in the future. That is primarily because of the token’s role as a primary asset inside the Sandbox metaverse — a medium of exchange, governance and staking. As a result, it fared better than most of its top-ranking crypto rivals on Jan. 27.

What’s next for SAND?

The latest bout of buying appeared in line with a choppy recovery in the broader cryptocurrency sector that started on Jan. 24.

Between its nadir of Jan. 22 and Jan. 28’s top, the crypto market added over $150 billion to its net valuation. SAND, which recovered alongside other assets, bottomed out at $2.56 then went on to rally over 40% in just four days.

Following the bounce, SAND price confirmed its 200-day exponential moving average (200-day EMA; the blue wave in the chart above) as its interim support. If the euphoria surrounding the Snoop Dogg and Warner Music partnerships sustain, Sand will likely extend its upside momentum toward the 50-day EMA (the red wave) near $4.50.

Meanwhile, independent market analyst Cantering Clark doubted the upside setup, reminding that SAND’s pump could have posed a “helpful exit for holders” before a potential bearish continuation ahead.