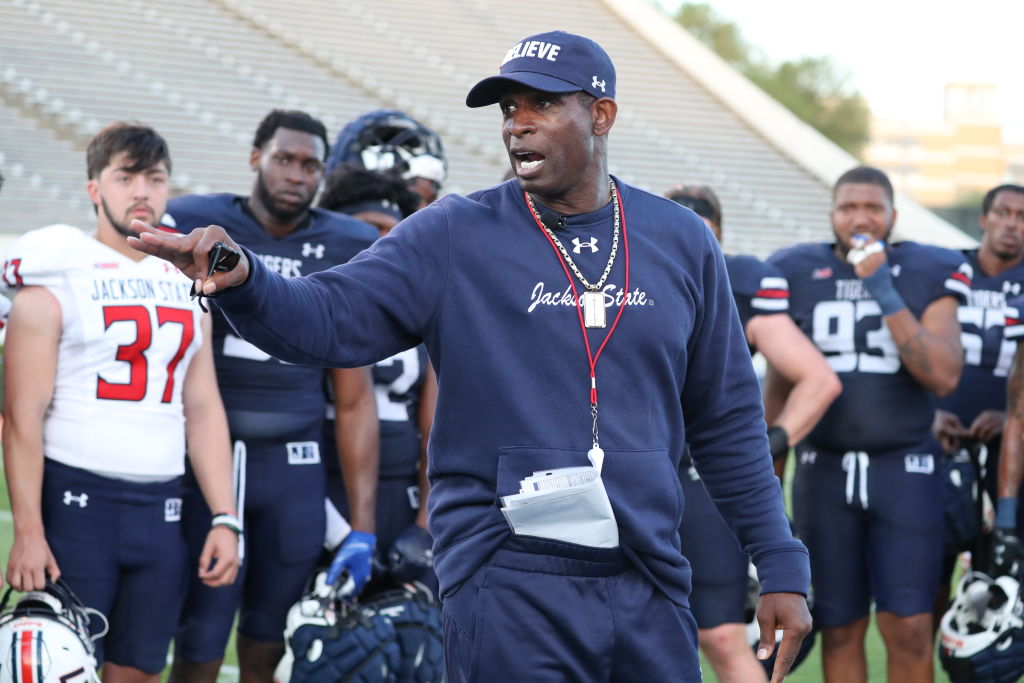 Deion Sanders made waves after joining Jackson State University, taking over the coaching duties of the men’s football team. The Hall of Fame cornerback fired back at fellow head coach Nick Saban, shooting down rumors that a Jackson State player is raking in serious cash.

Deion Sanders Wants To Publicly Hash It Out With Nick Saban

University of Alabama coach Nick Saban took jabs at his coaching peers in Texas A&M coach Jimbo Fisher and Sanders during an event in Birmingham this past Wednesday. As seen on Pro Football Talk, Saban took a big swipe at his former assistant coach.

“I mean, we were second in recruiting last year,” Saban said. “A&M was first. A&M bought every player on their team — made a deal for name, image, likeness. We didn’t buy one player, all right? But I don’t know if we’re gonna be able to sustain that in the future because more and more people are doing it. It’s tough.”

Saban then turned his attention toward Coach Sanders, per Pro Football Talk.

“Hell, read about it in the paper,” Saban added. “I mean, Jackson State paid a guy $1 million last year that was a really good Division I player to come to the school. It was in the paper, and they bragged about it. Nobody did anything about it. I mean, these guys at Miami that are going to play basketball there for $400,000, it’s in the newspaper. The guy tells you how he’s doing it.”

The player Saban is referring to is wide receiver Travis Hunter Jr., a star player from Georgia and the first five-star football recruit to sign with an HBCU. Hunter was previously slated to attend Florida State University, Sanders’ alma mater, but shocked the sports world by going with Jackson State.

Hunter took notice of Saban’s jab, noting that his mother still lives modestly while raising his siblings in a three-bedroom home.

“I got A mil?[laughing crying emoji]But my mom still stay in a 3 bed room house with five kids [cracking up laughing emoji],” read Hunter’s tweet.

Sanders responded to Saban’s accusation, stating flat out that his player is not earning that sort of money and wants to have a public conversation with Saban about the matter. Speaking with Andscape’s Jean-Jacques Taylor, Sanders rebuked the idea of a private call between him and Saban.