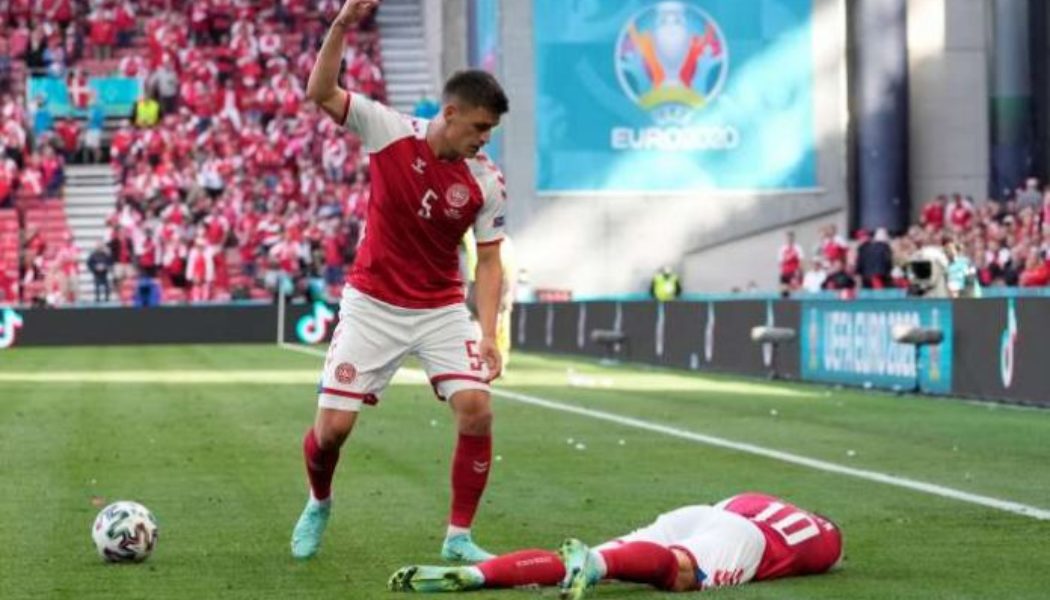 Denmark have given a fresh update on Christian Eriksen’s condition following his collapse in their Euro 2020 opener.

Eriksen fell to the turf in the first half of Denmark’s Group B clash with Ukraine at the Parken Stadium in Copenhagen on Saturday afternoon, and subsequently needed emergency medical treatment.

The match was suspended after the midfielder was removed from the stadium on a stretcher and sent to hospital, where he was later revealed to be awake and in a stable physical state.

The Danish Football Association (DBU) have now released a statement confirming that Eriksen will remain hospitalised to undergo more tests, but he has been in contact with the national team staff and his team-mates.

“This morning we have spoken to Christian Eriksen, who has sent his greetings to his team-mates,” the statement on the DBU’s official Twitter account reads. “His condition is stable, and he continues to be hospitalized for further examination.

“The team and staff of the national team has received crisis assistance and will continue to be there for each other after yesterday’s incident.

“We would like to thank everyone for the heartfelt greetings to Christian Eriksen from fans, players the Royal Families from both Denmark and England, international associations, clubs etc.

“We encourage everyone to send their greetings to the Danish FA, where we will make sure they are all passed on to Christian and his family.”

After the incident, Denmark were given the option to finish their first Euro 2020 fixture later the same day or on Sunday, and ultimately chose the former, with the game resuming from the original stoppage point four minutes before half-time.

Finland went on to spring an upset thanks to a 59th-minute effort from Joel Pohjanpalo, with Pierre-Emile Hojbjerg missing a late penalty for the Danes as they suffered a 1-0 defeat.

Denmark boss Kasper Hjulmand has explained why his team decided to go ahead with the match two hours and five minutes after the original kick-off time, insisting that no one in the squad was prepared to head home and rest after such a traumatic event.

“You can’t play a game with such feelings, [but] there were no players who could manage to go home, sleep and get up again [after what happened],” Hjulmand said post-match.

“We tried to win. It was incredible to go out and try to play that second half. Honestly, we had players out there that were completely done, emotionally done and emotionally exhausted.”