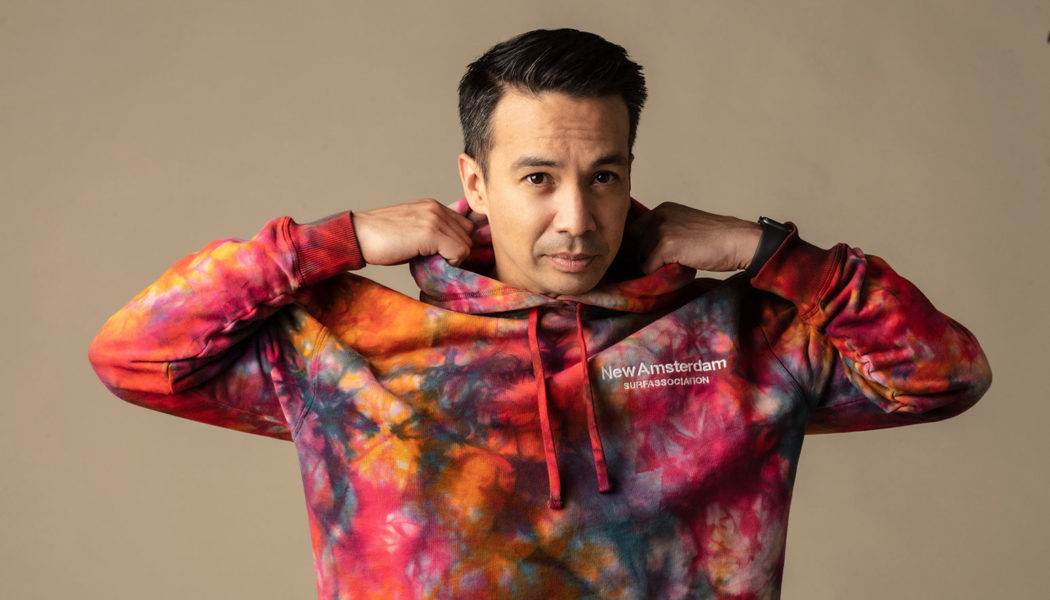 Despite his stage name and typically chill demeanor, Laidback Luke admits he was not always so Zen.

The Dutch-Filipino DJ, born Lucas van Scheppingen, says he struggles with a “control freak” personality. He rails against the use of ghost producers to aid his musical productions, insisting on doing his own mixing and mastering and even filming and editing his own videos.

“My wife sometimes tells me that I have the mind state of a mom-and-pop shop,” Luke tells Billboard. “She’s like, ‘Dude, Starbucks doesn’t make their own coffee anymore. It’s a multi [billion-dollar] conglomerate type of business. The way my mindset is, it’s like you’re a one-man band.”

But Luke worries that his fellow DJ-producers have strayed too far in the other direction by relying heavily on ghost producers and big teams to prep their productions and performances. He compares today’s biggest DJs to Formula One race car drivers. “It’s a team effort nowadays,” he says. “You have Team DJ X or Team DJ Y. Yes, that Formula One driver is up top, but he has a whole team behind him that helps him with his performance.”

The New York City-based DJ is known in the industry for discovering — and mentoring — younger talent in the ways of electronic music production. Luke counts among his early pupils Avicii, Afrojack and even a younger Steve Angello, who reached out at one point to ask Luke about his 2003 remix of Daft Punk’s “Crescendolls.” Their early connection led to Luke later collaborating with Angello and the other two members of Swedish House Mafia on “Leave the World Behind,” the 2009 track that propelled the careers of both acts.

Luke began his career as a bedroom DJ in 1992 — he credits Gaston Steenkist of Dutch duo Chocolate Puma for being his early mentor — but by 2010 he was firmly enmeshed in the EDM boom; he says he did more than 150 shows that year. The stresses of touring, combined with the pressures to produce new music on the road, led to a major burnout incident in which he injured his own infant son while drinking heavily.

He only extinguished his demons when he gave up alcohol and took his kung fu instructor, Mark Horton, on the road with him around 2011. That move also helped Luke, who has been doing martial arts for well over a decade, to win 10 medals at the 2013 and 2017 Kung Fu World Championships.

Also important to his mental health during the pandemic have been regular zoom support group sessions for DJs — one in English and another in Dutch which Hardwell and Don Diablo have attended. They have discussed issues in common like the stresses of touring and producing, Luke says.

The bi-monthly zoom sessions formed before the pandemic and around the time that Hardwell decided in 2018 to go on a sabbatical, Luke says. “The amount of people aware of this [would make] quite the festival lineup,” he says. The overarching goal is “to prevent another Avicii or Erick Morillo or i_o,” three DJs who suffered from depression and anxiety (Avicii took his own life, while Morillo died from a drug overdose and i_o died from natural causes related to an autoimmune disorder.)

Here, van Scheppingen — who also discusses ghost producing in Billboard‘s recent piece on the fight over crediting on a number of Alok songs — talks about his bouts with burnout, how EDM lead to a proliferation of ghost producers and more.

During those early days of the EDM boom, how stressful did touring become for you?

I remember at a certain point I was mid-summer tour [in 2010]. And I had decided I didn’t want to go on a plane anymore. I remember walking onto the jet bridge, and I told my tour manager, “I’m not going to do it. I don’t want to go through with it.” These were tours where I would play up until 3:00 or 4:00 a.m. Get up at 6:00 a.m., take a long ride. Then two planes, then another long ride to get to the hotel at like midnight… an hour and a half in the hotel, and then do the other show. And this for a couple of weeks in a row, and I was like, “Man, I just physically can’t anymore.”

What changed? How did you learn to cope?

My savior was a kung fu teacher. I had been doing kung fu for a decade. And I had in that decade two burn-outs. And there was a new wave coming of [life] being excessively busy, and he said, ‘We need to take your kung fu to another level. By this time, I only had been training once a month. And he said, “No, we’re going to take it to another level. You should bring me with you on tour.”

He showed me very important breathing exercises in kung fu. He showed me how to prepare myself mentally for shows or for tours and anything that’s up ahead. My body got fitter and stronger and mentally as well. He really armed me with some great tools to be able to go through that and to not lose myself. I also stopped drinking, and instead of being able to go to after-parties, I was competing in world championships in kung fu.

What were the breakdowns you mentioned?

My first one was when I was 20 years old. I’m an all or nothing guy. I’d had a bit of success with a couple of tracks that broke through, and I needed to have a follow up. I felt as if now the world was starting to look over my shoulder while [I was] producing tracks. I couldn’t come up with a good result. I just ended up being in the studio nonstop. Trying to finish tracks, not eating, not sleeping. Really over-pressuring myself into a burnout.

I kind of just laid in bed for two weeks trying to see if I would come back down from it. I remember just being so anxious. I would just be watching a soccer match on TV and my whole body was tingling type of burnout sensation. I was always the guy that said, “Burn-outs are for wimps.” Then I suddenly discovered that there was a boundary to my capabilities. From then on, I started to take a nap whenever I would reach that boundary.

Then in my 30s, I had another one due to alcohol. I came up with the brilliant idea that because I was working so much that I wanted to combine my time off with my work time. What if I just had a few drinks while I DJ then? The drinks became more and more drinks, and at a certain point I was just drunk and hung over every set — up until the point where I actually physically hurt my son of one and a half years old by being very frustrated at a family dinner on a Sunday. He did something that ticked me off. I picked him up and I smashed him onto the floor, and he looked up at me and his face was all covered in blood, and I was like, ‘I need to stop.’

And so cold turkey, I stopped drinking. That really, really helped me a lot with my energy, with my mental state. My son is 18 currently. We have a fantastic relationship. But yeah, that should have never happened, and it was a big, big lesson for me.

In the EDM boom what was the expectation in terms of the pace of music production?

Back then it was about one track every five weeks to two months. I remember just producing all the time — on my way to the airport, at the airport, in the airplane, in the hotel room. Mind you, because I did a ton of remixes as well — those were, you know, paid in advance and there was a lot of people asking for those. I was doing those as well. I was just constantly on my laptop, producing tracks everywhere.

How are your fellow DJs feeling about this? Are some of them stressing out about the expectation to put out a new track every month or two?

You would see this with a couple of producers breaking through, where they put out the breakthrough track and then two or three after that, but then touring started to pick up for them and their output practically diminished, because a lot of producers can’t produce when they’re not in their studio. I tried warning a lot of my students. “Just remember, if you break through you won’t be in the studio. You’ll need to learn how to produce on the road.”

To keep up, were they also employing ghost producers?

Absolutely. I’ve noticed that the new generation of listeners and admirers don’t really care about it anymore. It is like,’”Yeah, we know DJ X or Y, or Z is ghost produced. We know that they don’t even really DJ anymore. We just like the brand. The brand is everywhere. We like the guy’s face or the woman’s face.”

It is what it is. I am very much from the old school, where I love it when someone has talent, gets recognized for their talent and makes something that’s really from them. But nowadays, people started hacking it.

What’s your approach to creating fair splits when collaborating with other producers?

I’ve been in a couple of situations where I got blamed for not being as hands on as other producers. I didn’t agree with that, because I had made a couple of really important decisions for the track, for it to flourish. But then they had stated, ‘Oh no, because you had spent less time on it, you just get one-fourth [credit] and we’ll just get half. I was like, ‘Man, it’s become such a political game. From then on, about a decade ago, I decided anyone who I collaborate with just gets an equal amount. If I do most of the track, then they get the equal amount. If it’s vice versa, it’s still equal.

At the end of the day what are these DJ-producers if they aren’t musicians anymore and they aren’t really real live performers?

We live in the age of Milli Vanilli, and almost everyone that’s famous is Milli Vanilli. So, what are they? They are brands. They make money. They have a following, and they get consumed.

In the end, it doesn’t matter how much clout or money you get from being ghost produced. I found this out while sitting behind the piano with my new father-in-law who’s a singer and a musician as well. He and I wanted to make some [church] worship music together. We had a great time going back and forth, figuring out the minor and major chords and transitions. After we had figured it out on the piano, I sat him behind my Ableton, and I produced the track while he was sitting next to me. A couple of hours later we had the song, and he was grabbing the mic and singing into it, recording it into my Ableton.

Then I started thinking, “OK, so what if I was this ghost produced guy?” Then I would have said to my father-in-law, “I am so sorry. I know you know that I’m famous and whatnot, but let me get back to you in two weeks. I’ll probably send this to my producers.” Or maybe should I then tell him, like, “Oh, I’m not really a producer, we should stop this session right now. I can’t really play.” I was just super grateful that I am who I say I am. I just can’t imagine being right in front of your father-in-law, in front of your family, needing to explain yourself.