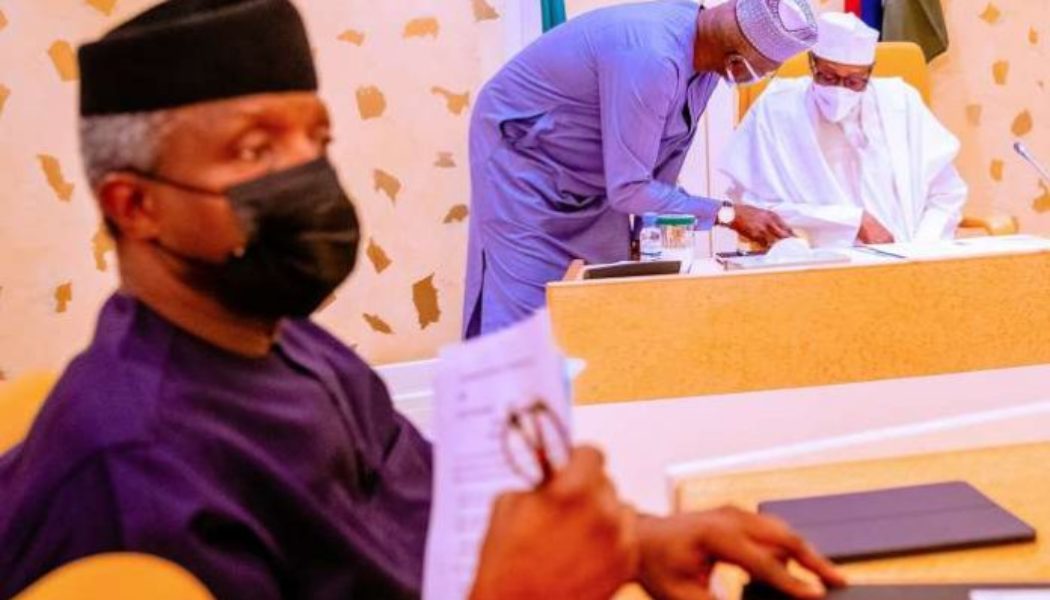 President Muhammadu Buhari, has ordered Inspector General of Police, Usman Baba to ensure insecurity is reduced to the barest minimum.

This is even as the Police Council made up of the President, Vice President, governors, ministers of Police Affairs, Interior and the Federal Capital Territory, confirmed Baba as the IGP.

Minister of Police Affairs, Alhaji Maigari Dingyadi, who confirmed the development at the end of the one and half hours meeting, said he was unanimously confirmed.

President Buhari had on April 6, appointed Baba as acting the Inspector General of Police.

Baba was a Deputy Inspector General of Police before his promotion.

Briefing State House Correspondents at the end of the meeting held at the First Lady Conference Room, the main purpose of the meeting was to “get the appointment of acting IG confirmed by the council, that is in keeping with section 205 of the constitution. It requires the confirmation by members of the council before he’s finally confirmed as the inspector General of police.”

He said the meeting was also to x-tray the security situation in the country with a view to finding lasting solution to the challenges plaguing the country.

Dingyadi said, “the meeting started with the usual presentation of tactics by the inspector General which fortunately because of his track record, was unanimously confirmed.

“Mr President used the opportunity to congratulate him on his appointment and called on him to ensure that his is worthy of the confidence reposed in him. He tasked him rise to the challenge and ensure that the insecurity that the country is facing is brought to the barest minimum.

“The IG assured Mr President and Nigerians that he is going to work assiduously to ensure that the responsibilities assigned to him are brought to bear and executed to the best of his abilities and to the satisfaction of all Nigerians.”

Baba, on his part said he briefed the council on the threat to national security across the six geo political zone, stating zones peculiarities.

He said: “There are peculiarities, like i said before, in the South East and south south is the issue of secessionist agenda championed by IPOB, I also talked about terrorism and religious bigotry in the North East. I also talked about the issue of kidnapping, armed robbery, Banditry and cultism as it affects the North Central and North West and South West. I gave a synopsis in terms of what we are doing to address this situation. I also thanked Mr President for providing additional logistics in terms of carrying out our duties and responsibilities.

“In collaboration with other security agencies, we try to checkmate other forms of lawlessness, criminality and unlawful agitation in order to ensure lives and property are saved and at the same time allow Nigerian citizens go about their lawful business.

“What is seriously worrisome in the South East, but it is gradually being checked and results are positive as regards the attacks and killings of security agents and assets belonging to the federal government. Our ability to checkmate this lawlessness has improved and we are getting closer to something positive.

“We also acknowledge the fact that there are some things that have been done by the federal government to improve police operations ranging from the establishment of the Police Trust fund, signing into law of the 2020 Police Act and several other intervention funds, necessary technology and intelligence led policing will be a reality.

“I briefed Council on adding to our strengths in terms of recruitment for 2020 and 2021 as this will assist us. I also briefed the council on community policing which has taken off in all the states and how the community police officers are assisting in providing security in their communities because, their operations are restricted to their immediate community.

“I briefed Council on the number of arrests we have made and recoveries in terms of firearms and weaponry that are being used lawlessly. I briefed council on rescue of kidnapped victims and what we are doing to secure the school children that have been kidnapped and how we are going about securing those in schools.”

On if police was ensuring that political thugs are not meted the same punishment as IPOB members in the South East, Baba said: “How do I differentiate between political thugs and IPOb? I don’t even need to differentiate them. The issue is, I’m looking for anybody who has committed offence or anybody who belongs to a proscribed organisation. So, the issue is it all depends on the level of criminality or lawlessness that someone does to know what punishment will be meted on him. If a political thug that commits crime he is in for it as a principal offender, if someone is sponsoring him either aiding or abetting him, conspiring with him they will be taken together.

“The issue is IPOB is a proscribed organisation and we expect nobody to belong to the IPOB. Thuggery is an offence and anyone will be dealt with according to the law. There are all offenders. It’s just like me differencing between an armed robber and a thug. It’s the level of crime that matters. There is no way we can say this is IPOB or a thug it all depends on the level of crime.”

On the alarm raiser by South West leaders on invasion by foreign herdsmen, the IGP said it is being taken seriously.

“Its a statement that will not be taken lightly, we are looking into it based on intelligence available to us we will deal with the situation and those who are making the statement are also at liberty by national calling to substantiate to the nearest police station.

“It is not today we have been hearing of foreigners coming into commit one crime or the other and in some instances, there are real incidence that some people that were arrested are not really Nigerians. It is not a new thing and whatever level of security we need to provide we are doing it. We have border patrol police, immigration are doing their jobs in terms of checking illegal aliens. It is possible but it is not as light as invasion, that word is very strong, we will look into it if actually it is true.”