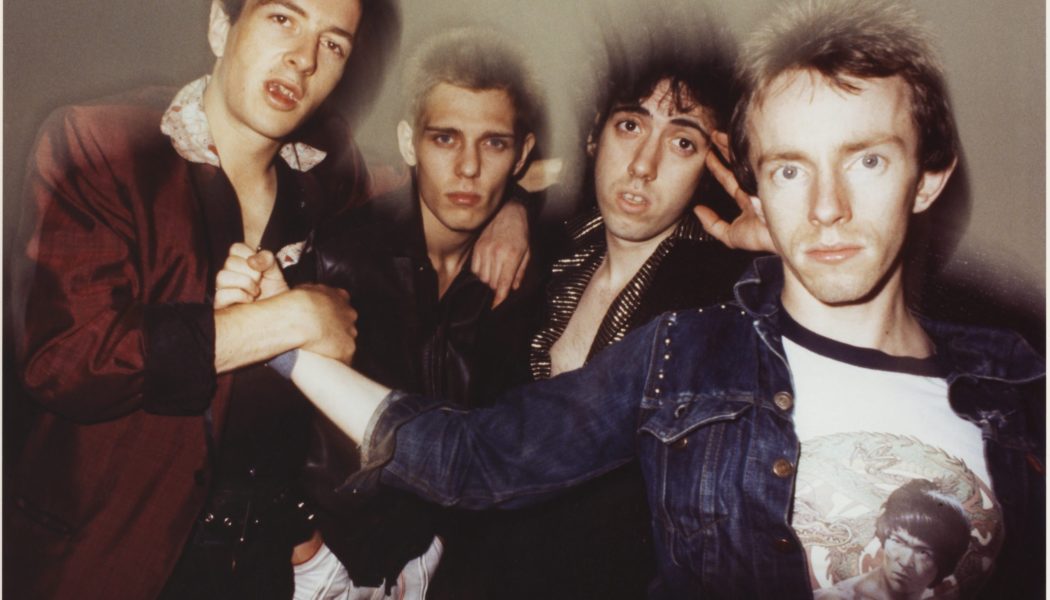 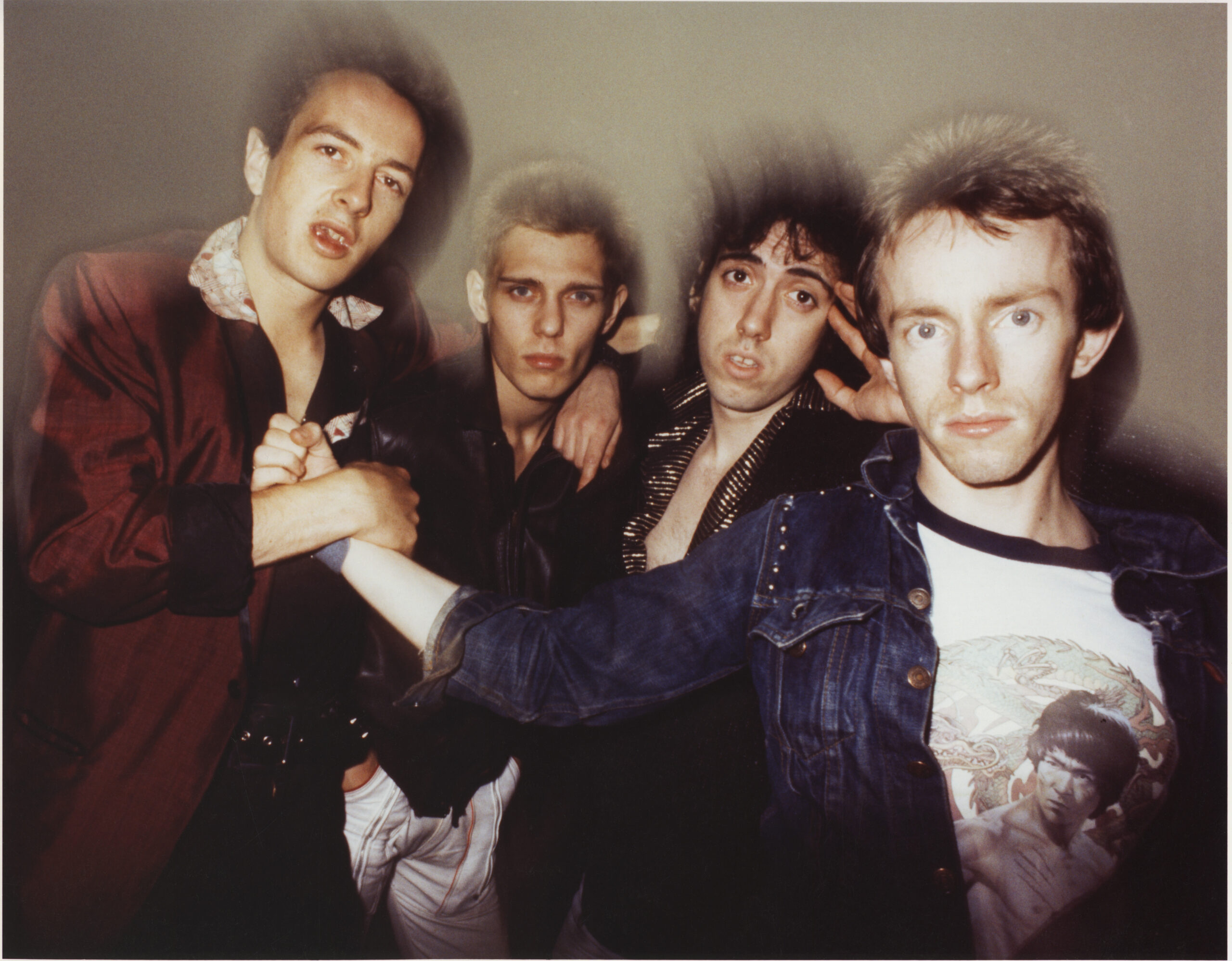 The Clash were “The Only Band That Matters.” But more to the point, they were the only band who’s ever gotten away with calling themselves something so self-aggrandizing, because it felt close enough to the truth. They formed in early 1976 out of the ashes of Joe Strummer’s pub rock band, The 101ers, and Mick Jones’s London SS. That summer, The Clash played their first gig opening for the Sex Pistols, with bassist Paul Simonon and drummer Terry Chimes, and within months punk rock exploded into front page news in the UK. Topper Headon took over as the band’s new drummer in 1977, and over the next five years, they reigned as a relentlessly prolific creative unit.

Punk rock’s three most important bands offered their many disciples three vastly different templates for a career. The Sex Pistols made one great album and then flamed out. The Ramones spent decades sticking to their fast, loud and simple formula. And The Clash made six vastly different albums in quick succession, constantly evolving and incorporating different genres into increasingly ambitious records that sometimes grew into double and even triple LP releases. Every punk band that’s worn their revolutionary politics on their sleeves or thrown a little reggae, ska or hip hop into their music owes something to The Clash. With the band’s best-selling album, 1982’s Combat Rock, turning 40 on May 14, let’s take a look at the band’s discography and see where it ranks among their other classics.

From outward appearances, The Clash were riding high after the success of Combat Rock. But tensions within the group were boiling over, and soon half of the band would fire the other half. First, Headon was ousted, and then Jones. The remaining members of The Clash, with three ringers rounding out the new lineup, only managed to release one widely reviled album before the once-great band sputtered to an ignominious end. But is Cut The Crap as bad as its reputation suggests? Frankly, yes. From the cluttered opening fanfare of “Dictator,” it’s clear that something has gone terribly wrong, with The Clash’s longtime manager Bernie Rhodes in the producer’s chair for the first time and utterly failing at his new job.

The sound of Cut The Crap is at once chaotic and defanged, with rudimentary drum machine grooves doing a poor job of taking the place of Headon. By the end of the album, Strummer settles into a groove and manages some pleasant, competently mixed songs like “Play To Win” and the band’s rousing final hit, “This Is England.” But it never quite coheres, sounding muddled and unsure of itself in ways that even the most indulgent parts of Sandinista! never did. “This album is the sound of The Clash just blowing smoke, thrashing in desperation,” wrote David Fricke in a Rolling Stone review that compared Cut The Crap unfavorably to the debut by Jones’s new band Big Audio Dynamite, released a few weeks earlier.

Headon joined The Clash shortly after they recorded their first album, and Give ‘Em Enough Rope marked the on-record debut of the band’s definitive lineup. Headon immediately proved his worth with powerhouse performances like the rat-a-tat-tat snares of “Tommy Gun,” and Jones’s growing pop smarts were becoming apparent on the Beatlesque “Stay Free.”  Caught between a revolutionary debut and an epic third album, Give ‘Em Enough Rope is the somewhat neglected middle child of The Clash’s ‘70s output. But it’s a blisteringly exciting, sharply produced album that would be the greatest record in almost any other punk band’s discography, with glimpses of the more far-ranging grooves to come on midtempo tracks like “Julie’s Been Working for the Drug Squad.”

Just a year after releasing one of rock’s greatest double albums, The Clash upped the ante by following London Calling with a triple LP. At a mammoth 144 minutes, Sandinista! is inevitably exhausting and far less consistent than The Clash’s earlier records, but the let-it-all-hang-out largesse is the point. There’s a wealth of great songs, from “Police On My Back” and “Charlie Don’t Surf” to “Somebody Got Murdered,” along with nearly a whole LP’s worth of trippy dub versions of various Clash songs, and other entertaining ephemera like children singing “Career Opportunities.” Blondie’s “Rapture” beat “The Magnificent Seven” to record stores by two weeks, but the latter is no less prescient in its fusion of punk rock and hip hop.

After a band’s made a double album, it can be difficult to go back to making single LPs without the result sounding small and anticlimactic. The challenge was even greater for The Clash, who’d just made a double and a triple album. The Clash recorded enough material for Combat Rock to release yet another multi-LP set, but in the mixing process, producer Glyn Johns managed to edit the album down to a tight 46-minute collection with irresistible songs like “Should I Stay Or Should I Go” and “Straight To Hell.” The result was a blockbuster that was still dense with experimental sonics and some of Strummer’s most clear-eyed political writing. And although the band was on the verge of splintering, The Clash still worked together incredibly well on Combat Rock. Take, for example, “Rock The Casbah” — Headon composed most of the music, playing piano, bass and drums, with Strummer singing the verses and Jones’s voice dominating the chorus.

Released in between debuts by The Damned and the Sex Pistols, The Clash’s self-titled first album was one of the crown jewels of the year punk rock took over England. Few bands have ever entered the world with a run of songs as explosive as “Janie Jones,” “Remote Control,” “I’m So Bored with the USA,” and “White Riot,” one after another. Original drummer Terry Chimes plays simpler, more straightforward beats than Headon would supply on later records, but they feel perfect for the primitive bop of Strummer’s earliest songs. The Junior Murvin cover “Police and Thieves” was one of The Clash’s earliest attempts at incorporating reggae into their repertoire, and planted the seeds for not just The Clash’s future genre experiments, but punk rock’s very long love affair with reggae and ska.

Imagine for a moment, you’ve just completed your masterpiece — a double album bursting at the seams with 18 great songs. But there’s one more dynamite pop song — nearly given away as a free single with a magazine — that you’ve decided to add to the end of the album at the last minute. The album sleeve had already been printed, but despite not appearing on the tracklist for London Calling, “Train In Vain” quickly became the album’s biggest hit and The Clash’s first Hot 100 entry as a signature song that displayed Jones’s quickly blossoming talent as a songwriter. Simonon may be the album’s true MVP, though, with his inventive basslines holding every genre experiment together and his snarling star turn on “The Guns of Brixton.”

A couple years removed from the punk rock hysteria of 1977, Strummer looks back on the iconic title track, declaring that “phony Beatlemania has bitten the dust.” The term “post-punk” is even more nebulous and difficult to define than punk itself, and is often reserved for bands that formed long after The Clash. But London Calling is in some ways the first post-punk album, with one of the genre’s leading bands looking beyond their scene and finding inspiration elsewhere, while still embracing the freedom and spirit of punk. “Warm, angry, and thoughtful, confident, melodic, and hard-rocking, this is the best double LP since Exile on Main Street,” Robert Christgau wrote. “And it’s selling for about $7.50.”

Home › Forums › Every Album by The Clash, Ranked