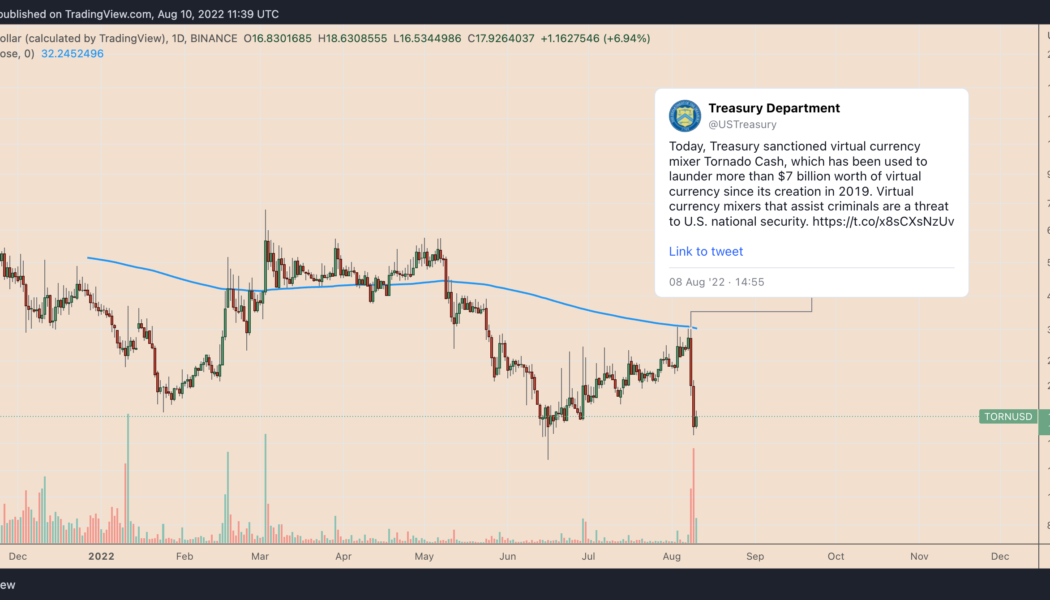 Tornado Cash (TORN) has lost almost half its market valuation two days after being slapped with sanctions by the U.S. Treasury Department.

The department accused Tornado Cash, a crypto mixer platform, of laundering more than $7 billion in cryptocurrencies, including a stash of $455 million allegedly stolen by North Korea-based hackers.

Immediate reactions were followed by U.S.-based crypto companies, including Circle and Coinbase. In a controversial move, the popular crypto firms blocked the movements of their jointly-issued stablecoin USDC tied to Tornado Cash’s blacklisted smart contracts.

On the daily chart, TORN’s price has slipped by approximately 45% since the Justice Department’s notice about Tornado Cash, to reach $18.50 on Aug. 10. By contrast, the valuation of all the crypto assets had plunged merely 6% in the same timeframe.

The downside move has pushed TORN price near a critical technical support.

TORN has been testing its $15–$18 range for a potential rebound due to its historical relevance as support. Notably, in January and June earlier this year, this level served as a springboard for TORN price to jump 275% and 100%, respectively.

Therefore, a potential rebound move from the range could have TORN test $32.50 as its next upside target, which coincides with the 0.236 Fib line as shown above. In other words, a 75% recovery by September 2022

On the other hand, a breakdown below the support range sends TORN’s price to new record lows.